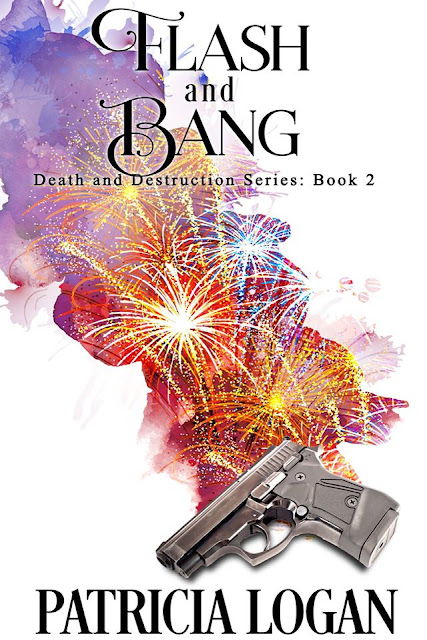 If running from a hit man wasn't scary enough, ATF agent Thayne Wolfe, has a new challenge in his life and this one may be even more dangerous than the last. He has to figure out how to work with his reckless new partner, a handsome former Marine who seems to have a death wish.

Jarrett Evans never stays in one place very long and being chained to a desk doing paperwork is not his idea of entertainment. His lover and new partner at the ATF seems to find ways to throw a monkey wrench into all his fun, especially when Thayne wants to curtail his need to jump off ten story buildings.

When their boss sends them to San Diego to investigate a fireworks accident, he figures Jarrett can’t hurt anyone playing with sparkers, not even himself. The fact is, danger, intrigue and Jarrett's dubious past seem to follow the men wherever they go.

From a Marine base at the Mexican border to an explosion in LA’s Chinatown, they aren't prepared for a seriously pissed off militia, a smoking hot ex-lover, and more guys who want them dead.
The sparks will fly in and out of the bedroom in Flash and Bang.

(Flash and Bang contains an excerpt from book 3, Slip and Slide)

“We need to get the hell out of here! Airstrike!” Thayne screamed as Adael jumped up and followed them, covering their retreat with a hail of gunfire from the automatic he held with his good hand. Thayne dragged Jarrett toward the double doors as he heard the roar of flames, a smattering of gunfire, and the sounds of dying men all around them. He tried to look Jarrett over for bleeding wounds but could only see what now appeared to be a bullet graze across Jarrett’s temple. Jesus! If that’s all there is…

Adael rushed in front of them gunning down anyone in their path as Thayne dragged his partner, running backward. He was never so grateful for anyone in his life. Thayne’s lungs were filling with smoke as they got closer to the entrance to the barn and he heard a great crash as part of the roof caved in, sending up a wall of sparks at the back of the barn. The truck with its container had been abandoned by those who’d wanted the shipment and those who’d brought it and virtually everyone else had escaped the barn or was dead.

The second they got to the double door of the barn, Thayne heard the roar of airplane engines. Out of nowhere, two more men wearing FBI vests ran up to them and grabbed Jarrett, relieving Thayne of his burden.

“Move!” One of them screamed. “Sixty seconds!” Thayne began to run, followed by Adael and the two men carrying Jarrett. They had just gotten to the tree line five hundred feet off when there was the unmistakable scream of a missile and he knew the F-18 had fired. They barely had time to duck when the entire barn and its contents went up in a massive fireball. Flames shot straight up into the sky and out at them. Thayne rolled on top of Jarrett, covering his unconscious partner with his body as the heat from the explosion reached them. He held his breath waiting for the lick of flames and the certain death he expected but after four or five heartbeats, it hadn’t come. He waited for a few seconds before raising his head to look at what was left of the barn.

“Motherfucker!” Adael said from beside him.

Thayne glanced over to him and then turned his face to look back down at Jarrett. His eyes were open as he blinked up at him. Thayne breathed a sigh of relief as Jarrett revived.

Thayne dropped his face and pressed it to the side of Jarrett’s cheek. He began to laugh.

Thayne felt good under his body. Jarrett kissed him harder, loving the taste of his lover more than just about anything. He loved topping Thayne and in fact, he was generally more comfortable as a top. Jarrett didn’t know what it was about remaining in control all the time but it was working for him now, that was for sure. Sometimes he needed this. Sometimes he needed to take hold of a lover’s hands, hold him down, and feel his lover submit to him. Sometimes he wanted to be the one on the bottom but after what he’d been dwelling on today, he needed to take control of his emotions the only way he knew how. He needed Thayne to submit to him.

Jarrett reached for Thayne’s hands, lacing their fingers together as he slowly dragged them up the bed. Once he had them over Thayne’s head, he broke their kiss and looked down at him.

“I need you too, Thayne. I need ya like this. You understand?”

Thayne’s bright blue eyes shone in the dim light of the room and he blinked. “You need me to submit to you, don’t you, Jarrett? Is that what you need from me tonight?”

Jarrett squeezed his eyes tight, feeling the well of tears behind his lids as he ducked his head, nodding jerkily. He raised his head and stared into Thayne’s beautiful eyes. Thayne leaned in close.

“Then take what you need from me, baby,” Thayne whispered against his lips. “I’m here, Jarrett. I’ll be anything you need me to be, sweetheart.”

Jarrett sucked in a breath, opening his eyes, allowing himself to stare at Thayne for just a second before he was forced to look away. He abruptly sat back, letting go of Thayne’s hands. He couldn’t let Thayne see what he knew was in his eyes at the moment. Opening that door wasn’t one he wanted to open tonight.

“Turn over for me, will ya?” The words came out graveled as his throat tightened. He moved off Thayne and waited until Thayne had flipped to his stomach. Without asking, Thayne raised his arms over his head and laced his fingers together as he pushed his ass up in the air. Jarrett felt his breathing stutter in his chest as everything about Thayne relaxed and went submissive on the bed. Jarrett’s heart swelled in his chest but he managed to scoot backwards off the bed and grab his duffel, removing his shaving kit where he’d packed lube and condoms for them. A moment later he climbed back on the bed and moved into place between Thayne’s spread knees. He leaned down and whispered in Thayne’s ear.

Thayne nodded and gratitude washed over Jarrett. He picked up the lube and squirted some on his hand before grabbing onto Thayne’s gorgeous bubble butt, spreading him wide as he sank fingers of his other hand into his crack. He immediately found the tight hole and began rubbing over it, twirling his large middle finger around the rim and thrusting the tip of it inside before pulling it out again. Thayne let out a breathless moan as Jarrett repeated the action, rubbing, thrusting, digging, dragging his fingers along his insides as he loosened him for his cock. Thayne remained motionless and silent except for the shudders Jarrett could feel as tremors began rolling through him. The more Jarrett worked his ass, the harder Thayne’s body trembled but true to his word, his usually verbose lover remained silent. It was incredible to Jarrett that Thayne cared about him enough to do this for him. He’d always known Thayne was a thoughtful lover but this brought that fact to a whole new level and it was what Jarrett desperately needed.

He abruptly removed his fingers and tore open a condom, rolling it on and slicking himself up, unable to dwell on that anymore. Jarrett moved into place behind Thayne, grasping both of his hips and pulling him up until Thayne was on his hands and knees with his legs spread. Jarrett grasped his cock with one hand, setting the other on Thayne’s lower back, and guided himself in. Thayne said nothing but his harsh intake of breath could be heard as Jarrett advanced, pushing past the tight ring of muscle inside Thayne and sinking deeply. Thayne’s rippling muscles gripped his cock like a tight fist and it felt so good Jarrett felt as though he could die from the pleasure it gave him. He pushed in deeply and then pulled out again as Thayne merely huffed.