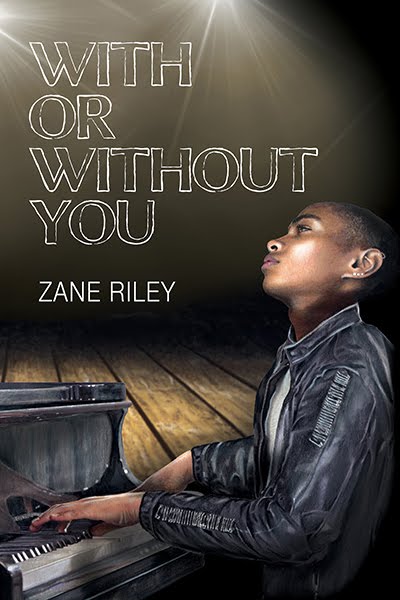 Book Name: With or Without You
Sequel to ‘Go Your Own Way’
Should be read in order to appreciate the books
Release Date: July 21, 2016

In the much-anticipated sequel to Go Your Own Way, high school seniors Lennox McAvoy and Will Osborne pick up right where they left off—navigating the tumultuous waters of a new relationship and dealing with Will’s disapproving father.

When a violent incident forces Lennox to give up his independent ways, he must come to terms with his past just as Will is grappling with his future. As Will’s college plans become reality, will Lennox have the courage to go after the opportunities he doesn’t think he deserves?

Excerpt:
The band room was empty when he pushed the door open, but the piano was set up like it was almost every afternoon these days. Only Mr. Robinette and a music stand littered with sheet music was absent.
"Hello?"
The silence struck Lennox as odd, but as he sat down he also realized how strange it was to announce himself. So much had changed since the first time he'd snuck in here to play on his own. Now he was auditioning for some college he still couldn't fathom.
To make Will happy. And maybe a little bit for himself.
"Ah, I wondered if you were going to show up."
Mr. Robinette was behind him, the door to his office now wide open. He'd taken off his tie and undone a few buttons on his shirt like he did most afternoons when they practiced.
"You just want to play it through a few times or mess around with something else?"
Lennox took a seat at the piano, but didn't both opening his bag. He'd memorized the piece he was playing by Valentine's Day and now, almost two weeks later, he could write it out measure for measure on blank sheet music. But playing it was becoming repetitive. For two hours, three times a week, almost nonstop with the same four pages and nothing else.
"I'd rather try something new. That piece is getting a little old."
Mr. Robinette smiled and pulled a chair up beside him. "I had a nightmare the other night and it was the theme song while I ran around a haunted house Scooby Doo style."
"You didn't catch a ride in the Mystery Machine, did you? I've always wanted that van."
"I've got a lunch box version of it. It doesn't fit much though because it's too narrow. Anyway, play what you want. I'll be here until about four-thirty, so it's all yours."
As Mr. Robinette returned to his office, Lennox pulled what had become his music notebook out of his bag and opened it to the latest page. He'd taken to composing during class when he should have been taking notes, especially calculus where he had no reason to pay attention anyway.
The latest page was a tune he'd come up with while the other kids had been tapping their pencils and erasing answers. Every moment of his life carried a rhythm, a melody, and an emotion he could create with, and his notebook was becoming a testament to that. He played through everything he'd jotted down over the past few days, but after several rounds he kept coming back to one. It was a piano version he'd tried—and mostly failed—to create of one of the songs Will had played on a loop a few weeks ago.
"I'm getting ready to lock up!"
Mr. Robinette's voice carried out of the office and into the band room. A few minutes and several jingles of Mr. Robinette's keys later, the office door was shut and Lennox was closing the cover on the keys.
"That last piece you were playing, was it a cover?"
Lennox shrugged as they headed for the door.
"It was supposed to be. Didn't sound much like the song."
"Well, the others did. They were all really good, even the ones that weren't covers."
"Uh, thanks."
Lennox watched him at the door to the parking lot for a moment. He'd been a great help over the last month—all year if Lennox was honest. Mr. Robinette had believed in him in his own way since school had begun, and thanks to him he had a decent shot at this audition.
"Thanks for… all of this. I actually feel like—just thanks."
Mr. Robinette gave him a genuine smile and patted him on the shoulder.
"You're very welcome. Let me know how it goes when you get back, okay? I'm rooting for you. Got all of my fingers and limbs crossed. You deserve the chance. Don't doubt that or yourself."
"I-I won't."
It was funny to have so many people believing in him after so long. Happiness was a strange feeling as well. Until he'd let Will into his life he couldn't remember how to capture such a feeling in his chest and keep it there. 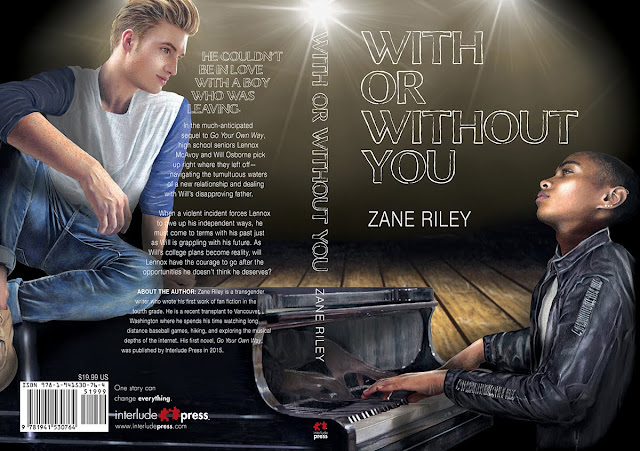 Today I’m very lucky to be interviewing Zane Riley author of With or Without You.
Hi Zane, thank you for agreeing to this interview. Tell us a little about yourself, your background, and your current book.

Hi! I’m Zane, and I’m a queer transgender writer from northern Virginia. Currently, I’m in the process of packing up to move to Washington state, so I’m pretty busy at the moment, but also very excited. I’ve been writing since I was a little kid, although I didn’t get truly serious about it until college when I switched my major to Creative Writing.

With or Without You is my second novel and a sequel to my first. It continues Will and Lennox’s story as they finish up their senior year of high school. As they begin to learn how to navigate their growing relationship, Will plans for his future in college while Lennox struggles to accept that his future is more than surviving until the next day. They each begin to forge their own paths only to realize that the futures they each want may lead them away from each other.

1)      Tell us something about your character’s friends.

Will has a whole group of friends. They’re the standard group most people have when they’re in school. When you spend all day when someone in classes, you tend to get to know each other and become friends. Both Roxanne and Natasha are those kinds of friends for Will. They see each other constantly, so they’ve become friends over the year. Will’s other friend, Aaron, shares a love of baseball with Will. They’ve played on teams together since they were kids.

Lennox doesn’t have any real friends at the beginning of the series. He’s had his sister while growing up, but he was more of a parent to her than a sibling most of the time. Once Lennox arrives in Will’s town, he starts to connect with a few people he meets. The first is Lucy who lives next door to him at the motel. They’re both in a difficult situation and, while Lennox is reluctant, they become fast friends. His second friend, who’s relationship develops during With or Without You, is Otto.

If it’s edible, Lennox will eat it. He’s never really had the opportunity to be picky about what he eats or what’s available for a meal. If he had to pick, he’d probably say tacos for all three.

Will’s favorite dessert is Scribblers popsicles. His favorite meal would be the chicken lasagna that Karen makes once in a blue moon. It’s the only meal she cooks without burning. For snack, it’s Ants on a Log. Lennox stares at him like he’s going insane as he scrapes peanut butter onto celery sticks and dots them with raisins, but they’re Will’s absolute favorite.

3)     What activity does your character absolutely hate?

Will despises math. Anything that involves higher level math classes with letters or imaginary numbers and he’s done. Lennox tries to walk him through is homework, but usually they get distracted.

Lennox doesn’t like to talk about his feelings. I wouldn’t say he hates it by any means, but he avoids it. He bottles up. For most of his life he’s never had anyone to talk with about how he’s feelings and so emotional intimacy is difficult for him. It takes a lot of effort to finally get him to open up, and then a lot of patience to get through his crude remarks to see what he’s trying to say. He’s working on it, and having Will to talk with has definitely been helping him learn to open up.

4)     What other author’s book do you think your character would be good in?

I think Lennox would do well in the Hunger Games series. He’s a survivor and has been since he was little. A lot of people wouldn’t have managed in his situation, but it’s in his nature to find a way to keep going.

Will would not fare so well in the Hunger Games. He’s too trusting, and expects the best from most people unless they prove otherwise. Something like… gosh, this is difficult for Will. So many of the books I read are too dark or edgy or horror-filled for Will. He’d be good in some of the Victorian era setting novels or this baseball series I read as a kid but can’t recall the name off. It was a series of chapter books about a baseball team heading for their Little League championship.

The 90s because that’s when I was born, ha ha! It’s honestly the decade I know the best of the two full ones I’ve lived through. So many of my childhood favorites happened in the 90s. My all-time favorite band (Green Day), my favorite cartoons (I was a Nickelodeon kid), Pokémon, Harry Potter… The list goes on and on. I also got to grow up playing outside, which is a phenomenon that’s all but non-existent these days. I’m glad I got that experience of being outside all the time as a kid, but also growing up with technology.

Meet the author:
Zane Riley is a transgender writer who wrote his first work of fan fiction in the fourth grade. He is a recent transplant to Vancouver, Washington where he spends his time watching long distance baseball games, hiking, and exploring the musical depths of the internet. His first novel, Go Your Own Way, was published by Interlude Press in 2015. 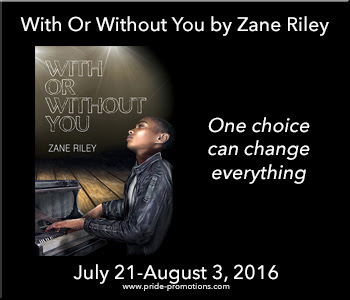 
Rafflecopter Prize: Grand Prize: $25 Interlude Press Gift Card, 5 first prizes: e-Copy of ‘With Or Without You’ by Zane Riley