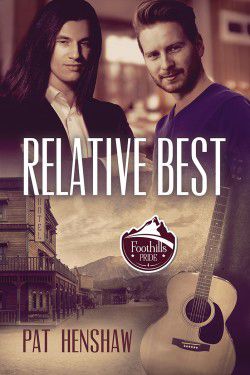 Sometimes love sneaks up when you’re least looking for it….

Zeke Bandy, owner of Bandy’s Finest Hotel in Old Town Stone Acres, California, is too busy for love. Not only does he oversee the operations of the historic hotel and uphold his family’s tradition of offering refuge to strays and runaways, Zeke also sings and plays down-home music two nights a week at the Stonewall Saloon and for occasional celebrations. Then Zeke meets Victor Longbow, the man of his dreams.

Vic isn’t looking for love either. In fact, because of his upbringing in a strict, white foster family, Vic’s not sure he believes in love. He’s in Stone Acres to open a branch office of a national brokerage firm. He’s also hoping to find a vintage photo of what might be his Native American ancestor.

After their paths cross, they become friends, then more. Connected by their experiences as orphans raised by flawed fathers, Zeke and Vic realize that some men must find love, hone it, and create families for themselves.

“I want to thank everyone for coming out tonight. You’ve been a great audience.” The couple at the center table looked up at me with almost identical grins. Despite this being an extra gig in a very busy week, I’d enjoyed playing for their bachelor party—even if it made me feel my loneliness more sharply.

“I’ll leave the happy couple with these words from an old Native American chief who, if he was smart, said them to his other half: ‘I will fight no more forever.’” I raised my glass of water and shouted over the noisy crowd, “To Sammy and Ned—may they have a long, happy, peaceful life together!”

The raucous audience at Stonewall Saloon whooped and hollered through my words and got even louder after my last sentence. Rising from their seats, Sammy and Ned raised their clasped hands like boxers who’d won a particularly hard bout but now were on their way to a great wedding.

As they gushed about how happy they were that everybody could make it to their wedding, I started to pack up my banjo and guitars. Tonight I’d left the fiddle backstage because I was so tired. I’d been burning too many candles from both ends. After locking away the instruments in the storeroom and breaking down the mic and the amps, I caught the end of Sammy’s speech.

“If you enjoyed Zeke Bandy’s guitar and banjo playing, remember he’s here at Stonewall Thursday and Friday nights. We’re honored to have him play at our wedding.”

When the crowd cheered, I stood, turned, and waved to the fifty or sixty bobbing heads on the other side of the stage. Whistles and catcalls joined the shouts and cheers. I had my fans and a lot of regulars in the audience.

“See ya tomorrow, Red! I love you!” some drunk yelled, and the crowd cheered louder.

“Oh, cut it out, guys! You’re making me blush.” And they were, with all their yells and waves and hoots and hollers.

A cry went up about more beer from one side of the room, and the night proceeded like all the others when I played. Attention spans flew out the window as the beer and hard drinks flowed. Completely sober, I put away the rest of the equipment and shut off the power on the platform that bar owner Guy Stone had designated as a stage.

Jimmy Patterson, Stone’s significant other and owner of Penny’s coffee shops here in Stone Acres, California, waved at me as I returned to the barroom from the storage area in the back.

“I got a table!” He was trying to shout over the noise.

As I limped toward him, men slapped me on the back and told me how much they enjoyed my playing. I kept moving, even though guys tried to stop me and give me requests for Thursday night. One guy even grabbed my face and kissed me, which would have been really flattering, even hot, if he hadn’t stopped, stared at me, and said, “You’re not Tom.”

I turned to walk away, only to hear him shout, “Red, you’re cuter than Tom.” I didn’t turn back but heard him yelp like he’d been hit.

I ended up sitting at a big table in the corner of the drinking area with a decent view of the tiny new dance floor. At the table with Jimmy sat four guys—flamboyant designer Fredi Zimmer and his husband, staid, reliable Max Greene, both of whom I knew fairly well, and two guys I didn’t know.

My eyes were drawn to the one who had strong cheekbones, long blue-black hair, and vibrant adobe-colored skin. He could easily have been a poster boy for the California Native American Heritage Commission. If I could pick a guy to kiss me unexpectedly, he’d be my choice. The libido I thought dead from overwork rose from its grave.

While the guys wrangled over who was paying for the next round, I took in the other man to the left of my preferred eye candy. This guy flaunted nearly white-blond hair, startling blue eyes, and a California tan, like the ultimate surfer dude. He did nothing for me, but I appreciated the effect he’d probably have on a lot of other guys here tonight.

I could easily see the humor in the three of us sitting at the same table, though. Considering I’ve got bright red hair, porcelain white skin with a thick spattering of freckles, and cornflower blue eyes, this table covered a large portion of the rainbow.

Jimmy introduced us while he partially stood to get Stone’s attention. “Zeke, these are two of the groomsmen, Vic Longbow and Hayden Weller. Zeke Bandy.”

Both of them nodded, a nod I returned.

“Hey, man. Nice pickin’ up there.” Hayden, the beach god, waved his nearly empty glass of beer at me.

“Thanks.” I never knew what to say when someone complimented me after a performance. While part of me was floating on the post-performance high, the rest of me was critiquing what I’d done and what I’d like to do over.

“Are you recorded?” Vic’s voice was low and soothing, the kind of sound that oddly created a center of calm in the middle of the barroom noise. I gladly stepped into the peace and took a deep breath.

I looked down, fleetingly taking in the scarred tabletop, and balanced momentarily on the pinpoint of serenity Vic had presented me.

“No, no recordings. I haven’t ever had the time or energy.” I shrugged. I owned and ran the historical hotel in downtown Stone Acres. When was there time to record?

“Where do you get the songs? Are they yours?” Vic was focused on me so much that the rest of the table dimmed.

“No. God, no. They’re all old tunes that have been knocking around forever, mostly by bluegrass and folk groups. I take it you don’t listen to this kind of sound?”

He smiled. “You’ve opened up a whole new door for me, and I can’t wait to explore what’s inside this new music room.”

His look caressed me enough that my dick perked, and suddenly I dared to believe my dream of finding a boyfriend and possibly a husband wasn’t as nebulous as I’d always thought. If someone this fine could look at my skinny ginger self and respond even half as much as he was, I was on the right path. I grinned at him and he at me.

Yeah, he was too hot for me with his high cheekbones and exotic hair, but I could practice on him and dream, right? 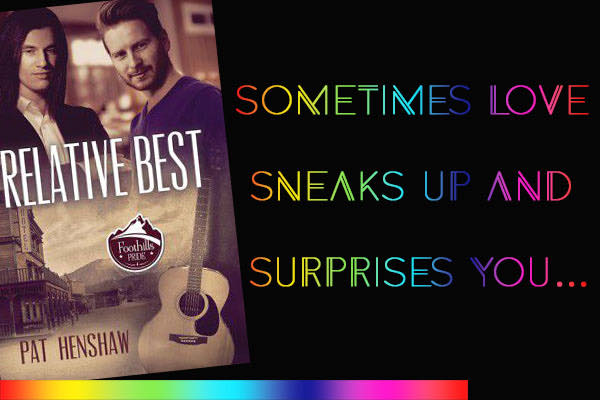 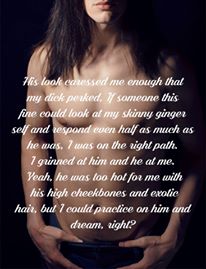 Pat Henshaw, author of the Foothills Pride Stories, was born and raised in Nebraska where she  promptly left the cold and snow after college, living at various times in Texas, Colorado, Northern Virginia, and Northern California.  Pat enjoys travel, having visited Mexico, Canada, Europe, Nicaragua, Thailand, and Egypt, and Europe, including a cruise down the Danube.

Her triumphs are raising two incredible daughters who daily amaze her with their power and compassion.  Fortunately, her incredibly supportive husband keeps her grounded in reality when she threatens to drift away while writing fiction.