Surfacing by A.L. Bates - Blog Tour with Excerpt and Giveaway 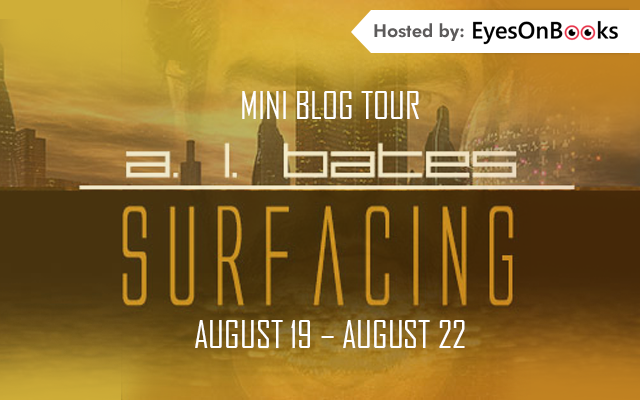 A few weeks following the events that concluded DEEP, Book One: The Ariel Series, Captain Joel Riley is struggling to adjust to his new relationship with his medic, Sean, and when a face from Sean’s past sets out to destroy Joel and his ship, Joel faces an impossible decision: Sean or Ariel.

Sensing Joel’s dilemma, Sean makes the decision to leave. He does so knowing he must confront his past and the abuse he suffered. Subjected to the same trauma again, this time at the hands of his brother, he uses the strength Joel taught him to take his future into his own hands.

For Joel, life without Sean proves unbearable and he comes to the realization that he needs more than just his ship. He sets out to bring Sean back… whatever the cost.

“Oh, I see. I should have guessed you would have found the biggest, dumbest fisherman to take care of you.”

“Did you just call me a fisherman?” Joel growled.

“Are you deaf as well as stupid?”

But Joel wasn’t listening. “Nah, you don’t come here to my town, with your Earth bullshit, and call me no fisherman.” Joel stepped forward. He was bigger than Mason, but Mason was dangerous and cunning.

Of Sean’s two brothers, Mason was the one who had caused the most trouble. He was as vicious as his father. Even faced with a man like Joel ready to knock him down, he wasn’t afraid. He wasn’t anything but amused. Sean realized Mason wanted to be punched, but he was too late to stop Joel.

The blow came quick. Mason staggered back, but Joel grabbed him, smashing his forehead into Mason’s nose. They broke apart, both bloody. Joel thrust his knee into the other man’s gut. Mason hit the ground, laughing. Sean seized the opportunity. He grabbed Joel, pulling him back.

There were voices nearby.

“We have to go,” Sean insisted.

Finally Joel saw reason. He nodded and together they ran, leaving Mason sputtering blood in the alley.

Start reading the series with book one!

Fleeing from a troubled past that left him feeling tarnished and used, Sean finds work as a medic aboard the deep sea mining ship Ariel, on a distant planet.

Under the leader ship of the infuriating, yet charismatic, Captain Joel Riley, Sean settles into his simple, but dangerous, new life. It’s a life he soon comes to love; albeit one in which he conceals his sexuality and avoids intimacy.

But Sean’s new world is turned on its head when an old face threatens to expose him for the man he used to be.

With Joel’s help, will Sean learn to come to terms with his past and become a man he can be proud of?

A.L. BATES has a keen interest in Sci-fi and adventure novels and enjoys writing stories with strong characters in imaginative backgrounds. Although an avid writer, Deep is the first published novella by A.L. Bates.