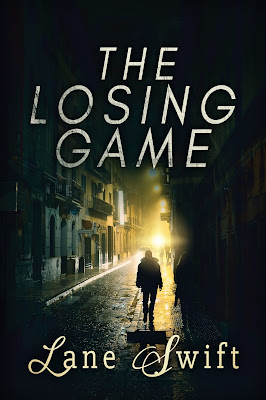 Grief-stricken and angry, Lucas Green is hell-bent on revenge against Richard Shaw, who killed his sister. Lucas has heard of a man who can help—the handsome and urbane owner of a boutique sex shop, with a head for planning crimes. But Dante Okoro has a past he’s desperate to keep buried. Though Lucas piques his interest in more ways than one, Dante turns him away. Still, he wonders if he made the right decision….
An unexpected death brings Dante and Lucas together once more. This time they can’t ignore the chemistry between them. But courting a lover with lies is a dangerous game. Dante has been spying on Lucas, convinced he has plans to kill Shaw. Lucas has been spying on Shaw, waiting for the right moment to strike. If Dante admits his suspicions to Lucas, he’ll surely lose him. If he doesn’t, Lucas might do something reckless—and end up losing everything.

Lane Swift is a fiction writer, mainly of contemporary romance, sometimes featuring a mild dash of paranormal.
She lives by the sea in Hampshire, England, with her husband, two children and two guinea pigs, and can often be found at her beach hut, imbibing coffee and dreaming up happy-ever-afters for her heroes and heroines.
Over the years, she’s worked as a waitress, a lab technician, a science teacher and a telecommunications consultant. She’s also played women’s rugby, climbed one mountain and run one marathon, but has never managed to learn how to whistle.