Knocked Out By Love

Brody Minton has loved Scarlett Harris for years. But she’s his best friend’s wife, so he’s worked hard to keep his distance. Hearing the marriage is over shouldn’t change anything. Only an ass would make a move on a friend’s ex… Except Scarlett wants help getting back in the dating game, and Brody’s torn. If he helps her out, he can keep an eye on her and guard her vulnerable heart. But having the woman he’s longed for for years in arms’ reach is hell on a man’s restraint, no matter how iron strong his will.But loving Scarlett is only half the fight.

NOTE: Although a part of a series, Knocked Out By Love can be read as a standalone novel. Each novel features a new hero and heroine!

Squaring her shoulders, Scarlett opened the door. Air whooshed out of her lungs at the sexy as hell man standing on her doorstep in a pair of faded blue jeans that rode low on Brody’s hips and a dark gray t-shirt that strained against his muscular heavyweight build.
Nothing about what he wore said they were heading to anything special.
She’d already made a mistake with this adult relationship thing. She’d treated tonight like a date. She shouldn’t have. She should’ve dressed in her regular clothes and not spent hour agonizing on what to wear.
A wolf whistle caught her off guard, and she jerked her gaze up from his massive chest to his eyes. Blatant hunger stared back at her from their caramel depths. Desire sliced through her, making her nipples bead.
Maybe she hadn’t picked the wrong outfit after all.
“Fucking hot,” he murmured.
And she stood a little taller, thrusting her breasts out. It was amazing how Brody made her feel like the sexiest woman in the world. Not cute. Not adorable. Not even pretty.
But hot. Sensual. Sexy.
“That makes two of us,” she said. “Damn, I’m a lucky girl.”
A grin stretched his lips. “You ready?” He held up his hand.
It took her a moment to register the helmet. Then her gaze shot past his shoulder to the road, her throat tightened. Parked at the curb was Brody’s Harley.
She didn’t ride. He knew that. Had respected that in the years she’d known him. Why would he bring that damned thing tonight?
“Where’s your Mercedes?” she asked, unable to tear her eyes off the death machine.
“At home in the garage.”
She finally dragged her gaze to him, only to come face-to-face with his challenging expression. Oh, he could totally go screw himself. “I’m not getting on that thing.”
“Yes, you will,” he said without being the slightest deterred by her refusal.
“Oh really?” She crossed her arms, irked by his assurance. “And how exactly do you plan to make me?”
He mimicked her posture. “I’m not going to make you. You’re going to do it yourself.”
“How’s that?”
“Because you want to try new things.”
“True. But riding a motorcycle is not on my bucket list. Sorry.”
He stepped forward, crowding her into the door. Her heart picked up pace as the scent of his cologne swam around her nose. “Think about it, Scarlett. The vibration between your legs. Your arms wrapped around my waist. The wind whipping past you. No compartment holding you in. You’re one with the outdoors. It’s a freedom you need to experience at least once.”
The image he painted formed in her mind. All she could focus on was his large body cradled between her legs as they flew down the highway, her hair whipping behind her. Her palms pressed to his chest. Why was the idea enticing?
Because it was Brody. Anything with him enticed her. 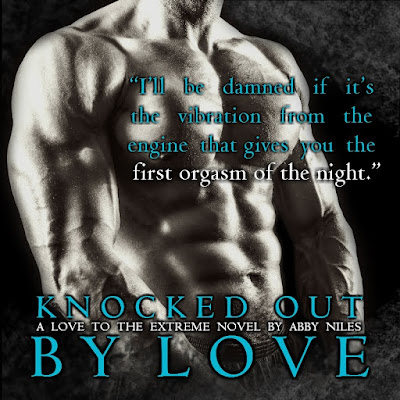 DON'T MISS THE OTHER BOOKS IN THE LOVE TO THE EXTREME SERIES...

Dante "Inferno" Jones is used to winning in the ring. But when the MMA fighter meets pretty Caitlyn Moore, he seems to be striking out left and right. The more Cait denies his advances, the more intrigued he becomes by the sharp-tongued beauty. She's a challenge he cannot resist.

Comfortable with the average Joe, Cait doesn't get it when the ultra-masculine Dante walks into her life and expresses an interest in her. Sure, she's shed eighty pounds and her confidence is building, but there's nothing spectacular about her. Certainly not enough to hang onto a ripped babe-magnet like Dante, whose violent profession, catty groupies, and cruel competitors are already making her life a living hell.

Dante's light-hearted pursuit quickly becomes a battle to win her heart as they find themselves thrown together again and again and it's affecting his training. Cait won't let him lose the biggest fight of his career because of her, but when her plan to keep him focused lands her in the dangerous clutches of Dante's vicious opponent, there is more at stake than just the championship belt.

Talk about kicking a fighter while he's down. Former Middleweight champion and confirmed bachelor Tommy "Lightning" Sparks has lost it all: his belt, his career, and now his home. After the devastating fire, he moves in with his drama-free best friend, Julie. One encounter changes everything and Julie is no longer the girl he's spent his life protecting but a desirable woman he wants to take to his bed. Knowing his reputation, he's determined to protect Julie more than ever—from himself.

Veterinarian Julie Rogers has been in love with Tommy since she was ten, but would love to get over the man. She's quiet nights at home and a glass of wine. He's clubbing all night and shots of tequila. As friends they work great. As a couple? No way in hell. She just can't get her heart to agree. When she starts spending time with another fighter, the man who's always treated her like a sister is suddenly not being very brotherly and enflames her body like never before.

Can two childhood friends make a relationship work, or will they lose everything because they stopped FIGHTING LOVE?

Mac “The Snake” Hannon has spent years throwing himself into cage fighting as a way to lash back at the natural disaster that destroyed his future. A call for help has Mac returning to the one place he swore never to return: Kansas—in the height of tornado season.

There he meets free-spirited Gayle Andrews. At first he wants nothing to do with the infuriatingly, persistent woman, but the crazy challenges she tosses his way are impossible to resist. As she thaws years of bitterness, bringing back the Mac he believed long gone, he starts to make peace with the past and see the future again. Until he learns she chases his worst nightmare, then he can’t get away fast enough.

Meteorologist and storm chaser, Gayle Andrews is no stranger to being left behind and now believes in living in the moment. She wants to do just that with the handsome extreme fighter with the achingly sad eyes. As she works to replace the sorrow with desire, she finds herself breaking her one rule: have fun, but don’t fall in love. When he suddenly pushes her away and she discovers the horrifying reason why, she issues one more challenge: face his fear and come on a chase with her.

Will squaring off with the past lead to a victory for heartache or love?

Doctor Ella Watts wants her old life back. Desperately. But the past has returned for its rematch, and going back home—even telling anyone her real name—isn’t an option until she’s confident in her MMA abilities. Personal trainer Lance Black is the man to help her reach her goals. Not only is he toned, muscular, and gorgeous, he’s patient, a great teacher, and willing to treat her like a worthy opponent. Except his size makes her freeze whenever he gets too close. If Ella can’t learn how to overcome her fear of being attacked, she’ll never be able to move on with her life.

Underground fighter Lance Black knows there’s more to the mysterious blonde ninja than a beautiful woman determined to improve her fighting skills. She can best anyone close to her size – man or woman – but insists on working out with him, even though he’s got a good 70 pounds and several inches on her. Despite her reticence, he’s determined to get her to open up so he can help her get over her mental block. And if that means he can get to know her outside the gym, all the better.

As long as she never learns his secrets.

Abby Niles is the author of the contemporary MMA series, Love to the Extreme, and the paranormal series, The Awakening. She is also the author to the geeky romantic comedy, Defying Convention, where Live Action Role Players (LARPers) set out to teach their favorite author a lesson, but end up playing matchmaker instead. Abby lives in North Carolina with the love of her life and their combined gaggle of kids. When she’s not writing, she’s trying to catch up on an endless pile of laundry and find time to get some much needed reading in.