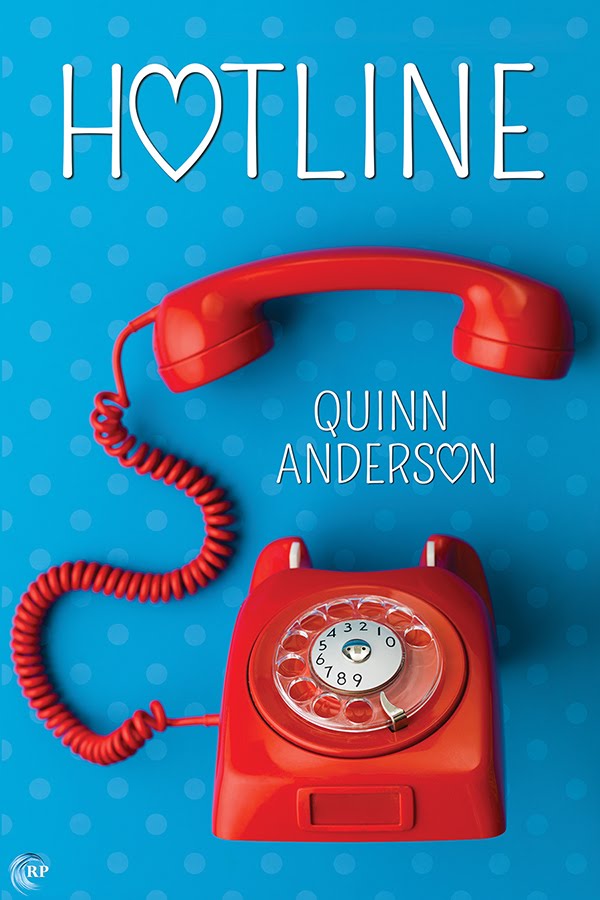 Hello, everyone! This is Quinn Anderson, author of the Murmur Inc. series, and I'm here to share some inside information about, Hotline, coming out October 31st. Stay tuned to hear about where I get my ideas, writing comedy, and how I went "undercover" as a sex worker to research my novels. Leave comments on the tour posts for a chance to win a $10 Riptide Publishing gift card!

Zack never intended to become a phone sex operator, but with half a college degree and a smart mouth, his options were limited. It helps that he has a knack for thinking on his feet and a willingness to roll with whatever his clients throw at him. Sure, he gets his fair share of creeps and unconventional requests, but it pays the bills, and he’s in no danger of breaking his one rule: never fall for a client.

Until a man named “John” starts calling, and Zack finds himself interested in more than a paycheck. It’s not just that John has money, or that his rumbling baritone drives Zack wild. He’s everything Zack isn’t: educated, poised, and in total control of his life.

A twist of fate brings them face-to-face, and now that they’ve seen each other—and spent an unforgettable night together—they can’t go back to the way things were. A sex worker and a trust fund brat . . . It’s like Romeo and Juliet, but with less stabbing and slightly fewer dick jokes. Hopefully they can pull off a more successful ending.

To celebrate the release of Hotline, one lucky winner will receive $10 in Riptide credit! Leave a comment with your contact info to enter the contest. Entries close at midnight, Eastern time, on November 5, 2016. Contest is NOT restricted to U.S. entries. Thanks for following the tour, and don’t forget to leave your contact info!