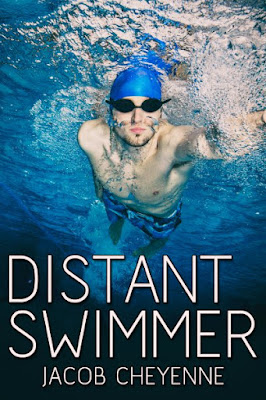 Shy and scholarly, long-distance swimmer Ryan Zwick thinks he’s the only gay member of the college swim team. He keeps his head down in the showers, and his head in the books the rest of the time.

But when a sporty new transfer student joins the team, Ryan feels a surge of hope. Sexually inexperienced and looking for love, fellow swimmer Blake Gossens is everything Ryan wants in a boyfriend. But what is Blake’s game, exactly? And just how straight is he?

Blake seems to be more interested in Ryan’s best friend, Marissa, leaving Ryan to go back to secretly checking out his teammates in the pool. But Ryan keeps getting mysterious messages in his dating app from a stranger who seems to know a lot about him. Could this messenger be Blake? Or someone else?

When bad weather hits unexpectedly, Ryan is forced to confront his real feelings toward Blake, while opening up to the stranger by his side, eventually giving in to his wildest fantasies -- and his heart.

Ryan Zwick is a competition distance swimmer at Chippewa College. He also happens to be the only, or so he thinks, gay member of their swim team. He spends his days furiously working through an impossible schedule of training, swim times, classes, and study time. He hangs out mostly with his friend Marissa, who he's known since grade school. While he's okay with his life and how it's going, he wants more...he wants someone to love. Being inexperienced, Ryan is feeling his way through to find what he wants.

So I went into this story with the impression that the blurb is telling you who the two main characters are going to be in the book. While a good portion of the book is spent with Ryan focusing on his new teammate, Blake, he is actually missing out on what's right in front of his face already. Now I won't give away that part of the plot, I'll leave that to you the reader to watch it all unfold.

I have to admit that the story was just okay for me. I liked Ryan's character a lot, and a few other members of his swim team. However his best friend Marissa was particularly problematic for me. The way she spoke to Ryan when he confronted her at two different instances was not how you speak with a friend. She lashed out and became almost vicious, calling Ryan names that were borderline homophobic, for me at least. Blake at one point did something similar to Ryan.  These instances are mostly the reason my rating is just a 3.5 star.

While I did thoroughly enjoy Ryan and his discovery of the other person and also his time with his swim team the story was, again, just okay for me. Now that being said as readers we all have our own tastes and what works for us in a story. While this didn't completely work for me, other readers may absolutely love the story. I encourage everyone to form their own opinions of a story instead of taking a review as gospel. So if Distant Swimmer sounds like something you'd want to read, go out and grab it.


Jacob Cheyenne is an author of M/M Romantic Fiction. His characters and stories are often inspired by real historical events, figures and scenes from classical art, or from old black and white portraits he collects in antique stores. His debut novella “Hanukkah Gifts” focuses on the turmoil between two young Jewish men with very different ideas about how to reconcile their faith and sexuality.

When not writing, the author loves swimming, hearing live music, reading fat books on empty beaches, and drinking anything coconut-flavored. When not traveling, he lives and works in the bustling heart of New York City.