The Black Sheep And The Rotten Apple by K.A. Merikan - Release Day Blitz with Excerpt and Giveaway

The Black Sheep and the Rotten Apple is the kind of book that just needed to be written, despite our already tight schedule. The idea first came to us when we watched a documentary about highwaymen, but we promised ourselves to wait. And then we went to Cornwall for a month, and initial plans collapsed. As we walked through the woods, watching the lush nature and the old stone cottages peppered on both sides of a valley where we were staying, the characters and story steadily came to us. Our aim was to write a historical book that provides as much excitement as readers learned to expect from our contemporary romance.

If you want to see our inspiration photos for this book, check out the ‘Black Sheep and the Rotten Apple’ Pinterest board:

The Black Sheep and the Rotten Apple is our baby. It’s been a year since we started working on this book, and to celebrate its release, we’re organizing a quiz for readers who follow The Black Sheep and the Rotten Apple blog tour. Answers to all questions will be provided in the blog posts, and we will then randomly pick the lucky winners. You can win:
For a chance to win, follow the instructions in blog posts and solve the quiz, which will be published on our website on 1st February 2017. Please, send answers to kamerikan@gmail.com with ‘Black Sheep Quiz’ in the subject line of the email.   Winners will be randomly chosen from readers who sent us correct answers by 17th February 2017.


LINKS TO ALL POSTS: 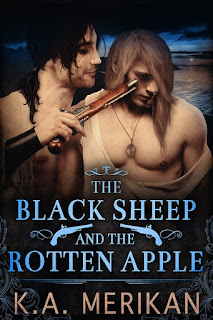 “How does one start a relationship with another man when it is forbidden?”

“One needs to decide that the other man is worth dying for.”

No one forces Julian Reece to marry. Not his father, not his brother. No one.

When he is thrust into a carriage heading for London to meet his future bride, his way out comes in the form of an imposing highwayman, riding a horse as black as night. Julian makes a deal with the criminal, but what he doesn’t expect is that despite the title of baronet, the robber turns out to be no gentleman.

Sir Evan Penhart is pushed into crime out of desperation, but the pact with a pretty, young merchant’s son turns out to have disastrous consequences. Not only is Evan left broke, but worse yet, Julian opens up a Pandora’s box of passions that are dark, needy, and too wild to tame. With no way to lock them back in, rash decisions and greedy desire lead to a tide that wrecks everything in its way.

But Julian might actually like all the sinful, carnal passion unleashed on him. How can he admit this though, even to himself, when a taste of the forbidden fruit could have him end up with a noose around his neck? And with highway robbery being a hanging offense and the local constable on their back, Julian could lose Evan before he can decide anything about the nature of his desires.

K. A. Merikan is the pen name for Kat and Agnes Merikan, a team of writers, who are mistaken for sisters with surprising regularity. Kat’s the mean sergeant and survival specialist of the duo, never hesitating to kick Agnes’s ass when she’s slacking off. Her memory works like an easy-access catalogue, which allows her to keep up with both book details and social media. Also works as the emergency GPS. Agnes is the Merikan nitpicker, usually found busy with formatting and research. Her attention tends to be scattered, and despite being over thirty, she needs to apply makeup to buy alcohol. Self-proclaimed queen of the roads.

They love the weird and wonderful, stepping out of the box, and bending stereotypes both in life and books. When you pick up a Merikan book, there’s one thing you can be sure of - it will be full of surprises.