Imago by N.R. Walker - Blog Tour with Review and Giveaway 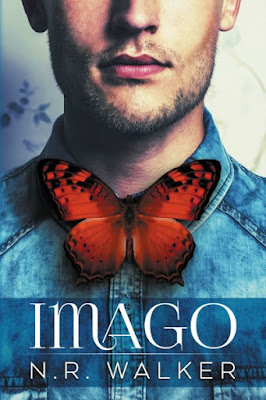 Nerdy, introverted genius lepidopterist, Lawson Gale, is an expert on butterflies. He finds himself in a small town in Tasmania on a quest from an old professor to find an elusive species that may or may not even exist.

Local Parks and Wildlife officer, Jack Brighton, is an ordinary guy who loves his life in the sleepy town of Scottsdale. Along with his Border collie dog, Rosemary, his job, and good friends, he has enough to keep from being lonely.

But then he meets Lawson, and he knows he’s met someone special. There’s more to catching butterflies, Jack realises. Sometimes the most elusive creatures wear bowties, and sometimes they can’t be caught at all.

Lawson soon learns there are butterflies he can’t learn about it in books. They exist only in a touch, in a kiss, in a smile. He just has to let go first, so these butterflies can fly.

Imago is the story of finding love, bowties, and butterflies.

Imago is the first book in a new contemporary romance series by N.R. Walker.

I'll freely admit I'm a bit of a fangirl for N.R. Walker, particularly after her Spencer Cohen series last  year.  She created one of probably two of my favorite contemporary romance characters ever in Spencer and his beau, Andrew. They were absolutely perfect as their own 'person' and together they were a magical couple. She's on the way to duplicating that feeling with Imago and Lawson and Jack.

Lawson and Jack couldn't be any more different from the other but they're also very similar in many ways in their personalities, traits, and what motivates them. Granted, we've just scratched the surface with book one in the series and these two are going grab your heartstrings and tug on them. Particularly Lawson, who's a bit awkward yet sexy and he totally knows what he wants and likes but then falls back into that adorkably genius mode which makes him endearing. Jack is rugged and earthy but he knows what he wants and likes..and his radar is firmly turned on Lawson.  While it's a bit of insta-love with these two characters as the events take place over a seven day timeframe, it's really not typical insta-love. There's a seriously connection with these two and they aren't skirting around reality. From their first date they're actively making that connection stronger by talking and learning about the other, what makes each other work and their interests, etc. It's not just sex and *BANG* they're in love.

There is a surrounding story with Lawson's research which causes them to be around each other constantly. This facilitates their attraction and the deepening connection between them. Overall though there isn't angst driving their story, at least not in this book, it's all about romance and Lawson's reason for being in Tasmania.  This story didn't need angst or a catalyst to make them fall in love, their attraction from the start drove Imago to the conclusion of the first book.

Literally Imago is a feel good, sweet and super sexy romance with a strong story surrounding Lawson and Jack. The characters, including the few secondary characters they meet, are fully developed and multi-dimensional. While yes the story takes place in seven days, it does not feel rushed and is told with even pacing, bits of action, and lots of details and dialogue. This is a well crafted romance that's going to bring you back for the next installment and even future books from this author.

I highly recommend this book for fans of this author but also anyone that's looking for a feel good, sweet, yet sexy story with a bow-tie wearing lepidopterist and a hunky Park Ranger.

N.R. Walker is an Australian author, who loves her genre of gay romance. She loves writing and spends far too much time doing it, but wouldn't have it any other way.

She is many things; a mother, a wife, a sister, a writer. She has pretty, pretty boys who she gives them life with words.

She likes it when they do dirty, dirty things...but likes it even more when they fall in love. She used to think having people in her head talking to her was weird, until one day she happened across other writers who told her it was normal.

She’s been writing ever since...