Jared's Family by V.S.Morgan - Blog Tour with Excerpt and Giveaway 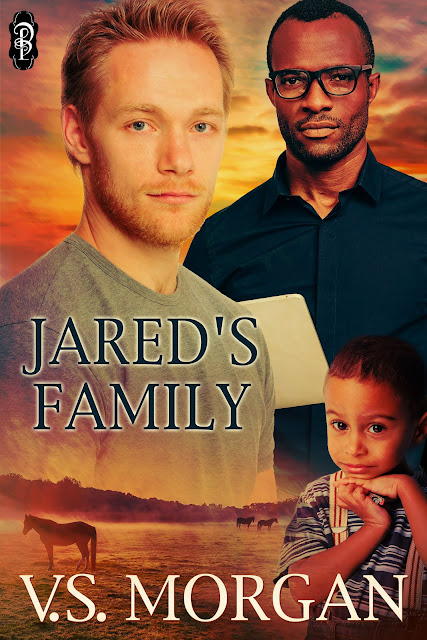 After witnessing his mother’s death, a once outgoing preschooler is now a quiet shadow of himself. The little boy suffers nightmares and rarely speaks, choosing to use the basic sign language he learned in daycare. Desperate to help his little nephew, Virge Stevens takes a leave of absence from the LAPD to bring Donovan, known as D to Montana for the therapy he needs.
A chance meeting at the library changes Virge and his nephew’s lives forever.
Jared Malone is one of five brothers, right smack damn in the middle. He is the peacemaker and the one who gets shit done. When his younger brother gets sick, Jared fills in reading to small children at the library. There he encounters a tall, dark, and handsome stranger and his cute little boy. Jared is immediately drawn to Virge but is still dealing with the betrayal of an abusive ex.
As the Malone family welcomes them to the ranch and into their lives, Virge’s instant attraction for Jared grows, but the cowboy is fifteen years younger than him. Will he be rejected?
Both men have secrets. Secrets that could destroy the connection between them. Can they overcome the odds and find happiness together?

What Others Are Saying:

“I would definitely read more from this author and recommend it to anyone who likes M/M with kids. Super sweet, lovable D will win your heart as much as the lead men will.” - HappilyEverChapter

“Jared's Family is a really cute sweet book. I loved the characters, even the supporting characters brought light to the book.” - Goodreads Review

“I liked this book, like really liked it. It is a sweet sweet m/m romance novel with a wonderful HEA. Thank you V.S. Morgan!! 5 Stars because: " Love conquers all.” - Goodreads Review

Another blond cowboy stood in the middle, working with a horse. He had a long rope around its neck, guiding it around the ring at a quick clip. The shirtless cowboy spoke in a firm yet quiet tone. Virge nearly choked on his tongue, eyeing the golden skin and muscles on display. This was their cowboy.
The man whistled, and the horse stopped. He rubbed its shoulder, his back to them, as they reached the ring’s split-rail fence.
“Daddy!” D shrieked, and the horse whinnied and shied, bumping into the man as it swung around.
“Whoa, easy, Spike,” the cowboy soothed.
Virge struggled to prevent his nephew from launching out of his arms while the cowboy calmed the large, skittish animal. He’d never been near a horse and was struck by its size and power, which the other man skillfully controlled. As the cowboy turned, Virge saw a tattoo on his chest. A redwing blackbird with a rainbow-hued ribbon dangling from its beak. His heart beat a little faster seeing the colorful ink. Could he be gay? The cowboy handed the rope to a dark-haired man before pulling on a T-shirt that stretched tight over those muscles. He suppressed a disappointed sigh.
Nate chuckled. “You’ve got some explaining to do, bro.”
“Hi, I’m Jared. I remember you from the library.” He approached with a rolling gait Virge found extremely sexy and offered his hand after wiping it against his denim-clad thigh. Damn, he was built all over and tall, just an inch or two shorter than his own height.
Virge shook his hand, hyperaware of the firm grasp of warm, work-hardened skin. “I’m Virge, and this is Donovan. He goes by D.”
“Glad you could make it out—”
“Why did he call Jared daddy?” Nate interrupted.
“He calls all men daddy and women mommy. If he especially likes someone, he adds their first names. D doesn’t talk much, so he must like Jared.” What about this cowboy had inspired his nephew to talk?
Author Bio:

V.S. Morgan has lived all over the US but calls Minnesota her home now. Her family includes her hubby, teen son, and a menagerie of pets.