Bear With Me by Jennifer Blackstream - Cover Reveal Blitz 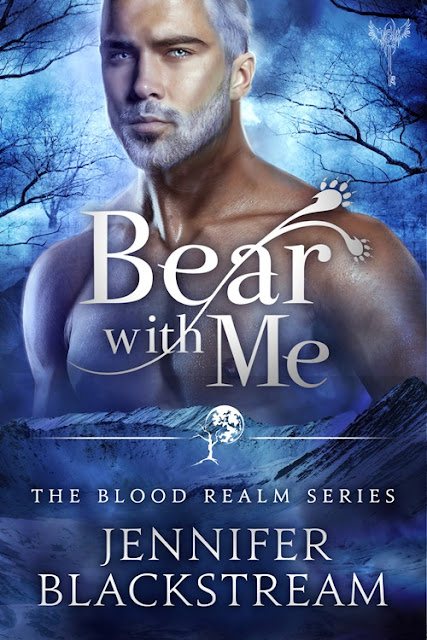 Bear With Me
(The Blood Realm Series, #4)
by Jennifer Blackstream

A beautiful bard looking for her voice

After witnessing her mother’s murder left her blind, Leta had to put away her sword and her dreams of becoming a bard. Now she is resigned to a calm life where the best she can hope for is a good marriage that will take the burden of her care from her father’s shoulders. When her father claims the gods have sent a man to be not just her husband, but perhaps her savior, Leta has to take a leap of faith…and hope she falls in love.

A handsome prince trapped in the body of a bear

Torben is a bear shifter struggling to pass a test laid on him by his power-hungry stepmother. Bound into his beast form during the day, able to be human only at night when the darkness hides him, he must find a wife. She can know him only as a bear and a bodiless voice in the night. For one year, she must let him keep his secrets, trust him as a wife should trust her husband. But what woman will climb into bed with a bear and trust it is a man waiting for her?
Even a blind woman can see when something is worth fighting for…

It was on the tip of Leta’s tongue to argue, to tell her father what he could do with his suitor who thought he could fix the poor little blind girl. But she bit it back. This was what they’d hoped for, what they’d thought would be impossible. This was no time for her battered pride to make a stand.

“I’ll meet with him.” She took a deep breath and straightened her spine. “Perhaps you could invite him to dinner this week?”

She slumped, hands going limp in her lap. “What? What do you mean he’s here now?”

“He’s…” Her voice was a pathetic squeak, and now it was her turn to clear her throat. “Father…are you telling me you’ve already given him my hand?”

“I signed the marriage contract five minutes ago.”

His voice was a whisper, so quiet she might not have heard it two months ago, before she’d lost her vision, when her other senses had not been quite so keen. She swayed and put a hand on the floor to steady herself. She’d agreed to an arranged marriage, had given him her blessing to find her a suitor. But…

“I don’t understand. Why so quickly?”

“And what if there is no through this? What if this is who I am now, what I am now?” Her muscles tingled with the urge to stand, to stalk away from him, storm off in a healthy fit of justified indignation. “You couldn’t let me have any dignity? Couldn’t let me go into this arranged marriage like any other woman? You had to send me off to be fixed, as though I were a table with a wobbly leg?”

Experience kept her kneeling on the floor. If she tried to fly off in a rage, she would succeed only in humiliating herself. High emotions flustered her, made it harder to remember where all the furniture was, how far the wall was. A broken nose or bruised shins wouldn’t help anyone, and it certainly wouldn’t do her wounded pride any good. And so she sat there, a prisoner. Locked in a dark world.

“Well then,” she said, her voice tight, “I suppose I’d better go meet the man who will be my nursemaid from now on.”

“Are you going to escort me out, or would you like me to feel my way there, give him a good idea of what he’s getting himself into?”

“Very well.” She was being childish now, but she didn’t care. She surged to her feet and stuck her arms out in front of her, swinging them side to side as she took small steps toward where she thought the doorway was. Her nerves screamed with heightened awareness, bracing to be struck by something, as if the room were suddenly full of stalactites. Ignoring her father’s protests, she shuffled forward, feeling in front of her with the toes of each foot and the tips of her fingers.

Her father tried to take her arm when she reached the door, but she shrugged him off. Composing herself as best she could, she groped along the wall of the hallway, inching closer and closer to the main room of the house. She was grateful there were no stairs, and she was able to make it to the sitting room attached to the foyer without falling or striking anything.

It was hard to describe how she knew someone was in the room, even though she couldn’t see. Something about the hairs on the back of her neck, a tingle down her spine that screamed at her she was being watched. She always knew when someone else was in the room with her, but this time there was something more. A thrill that brushed her fight-or-flight reflex, filled her with a strange, warbling anxiety. Someone was watching her. Someone…big.

Don’t be ridiculous. You can’t possibly feel size, her mind chastised her. Still, her senses stubbornly refused to admit any doubt. Whoever was watching her had a weight to his presence, and she could feel it. She blinked and moved her eyes around, trying to see something, anything, a slice of shadow or light that would give her a clue. But the darkness remained as thick as it always was, silent and impenetrable.

A strange scent wafted past her nose. Musk and the crisp scent of the wind off the mountains to the north. The faintest hint of sea air. The floor creaked as someone shifted their weight. Her heart skipped a beat and her instincts crowed in vindication. There was definite weight to that sound.

If that was her husband, he was not a small man.

“Are you really going to let the blind woman stand here wondering if she’s alone in the room?”

“You seem very aware that you are not alone.”

The voice was masculine, and so deep that it vibrated things low in her body, quickened the pulse in her neck. She angled her ear toward that voice, forming a mental picture of the room and her visitor’s location based on where his voice had come from. It was lower than she’d expected, as though he were sitting down.

“Leta, this is Torben Biorna. Torben, this is my daughter Leta.”

“I understand I’m your wife now.”

She threw the words down like a gauntlet, using her tone to make it clear what she thought of such things being settled without her presence, let alone input. The floor creaked again, and somewhere underneath that was a different sound that she wasn’t familiar with. Something hard sliding against the wood. It was brief, too brief for her to consider it closely. She frowned and tilted her head a little more, waiting to hear if it would happen again.

Again his voice did strange and wonderful things to her body, teasing sensations from her with that hint of promise, that faint brush of heat. Warmth washed over her cheeks, and she was horrified to realize she was blushing.

If he noticed her embarrassing reaction, he kept it from his voice. “Things progressed quickly, and I don’t blame you for being displeased at your lack of participation. It is not how I would have liked to begin our relationship, but I hope you’ll give me a chance to make it up to you.”

She groped for her temper, needing it to bolster her defenses against that voice. “My father says you think you can fix me.”

“No, it’s all right. I would be offended too, were I in her place.”

Another creak of the floorboards, followed by that same sound. Leta leaned forward, and it stopped immediately.

“You do not need to be fixed, Leta. You are not broken.”

Her father had spoken those same words to her, more times than she could count. But they were different coming from this man. He spoke with a definite authority, an unwavering confidence that said he knew he was right. It touched something inside her, something frightened. A tiny knot of tension she hadn’t been aware of relaxed.

“Torben was a solider.” Her father’s voice was gentle now, encouraging. “He’s known a lot of men who had very strong reactions after witnessing horrible things. He’s helped them.”

“Your father told me what happened to your mother,” Torben said quietly. “I’m sorry for your loss.”

Echoes of her mother’s screams filled Leta’s ears. Her chest rose and fell more rapidly, her breaths sharper, painful. Ice water trickled through her veins, chasing away the warm feeling Torben had summoned with his words, his voice. The knot of tension returned, trailing a string of others until she stood hunched in on herself, falling into an all-too-familiar nightmare.

“I don’t want to talk about it.” Her voice was weak, strangled by the memory peeking out at her like a monster from the mouth of a cave. She held her hands out, feeling around herself for orientation.

Her father took her arm, and she wilted with relief and let him lead her to a chair. Sitting calmed her, took away the awful feeling of disorientation that struck her when her emotions overwhelmed her spatial sense. She fought her way out of the panic, tried to reorient herself, remember where her husband was.

“We don’t have to talk about it.” He spoke as if he’d sensed her discomfort, her need to know where he was. “Know only that I am here to listen if you change your mind.”

She bobbed her head, grateful for his willingness to let it go. “You’re going to stay with us for a while, then?”

Awkward silence billowed into the room like dense fog.

“Leta…he’s your husband.” Her father shifted on his chair, his discomfort announced by every squeak of the wood. “You’re leaving with him.” 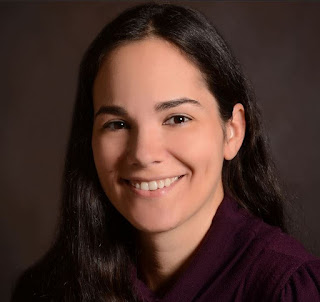 Jennifer Blackstream is a USA Today bestselling author of fantasy/paranormal romance. Urban Fantasy will soon be joining her repertoire, and if she doesn’t get hold of the insidious roving gang of plot bunnies, there’s going to be steampunk sprinkled in there too…

To date, Jennifer has two series:

Bonus Adventures in the Blood Prince World:
Book 2.5 – What Big Teeth You Have (free when you sign up for mailing list mentioned below)
Book 4.5 – The Pirate’s Witch
Book 5.5 – Dead to Begin With (available only between Thanksgiving and whenever Jennifer takes her Christmas tree down)

Jennifer has unfailing affection for the authors who have influenced her, including Laurell K. Hamilton, Jim Butcher, and the sorely missed Sir Terry Pratchett. Her books include humor, romance, and action, with enough darkness to keep things very interesting.

When Jennifer isn’t writing, she can be found re-watching Boondock Saints, Noises Off, or Gross Pointe Blank. With one of those classics in the background, she might also be searching Amazon for something she wants, but doesn’t need (Is there any such thing as a kitchen gadget that isn’t an absolute necessity? And don’t even get me started on office supplies…).

You can find Jennifer at