Can a whistleblower find a new future with a wolf while being chased by a corrupt cop and the Serbian mob?

Richard Kerrigan is on the verge of losing hope. Fired from his job for blowing the whistle on a defect that would harm service members if used as designed, he is now blacklisted in the Chicago area. A local Serbian mobster wants Richard and won’t take no for an answer.

Garou Industries, the loup garou privately owned company, has been searching for Richard to offer him a position in the company as they value having someone with his integrity on staff. Richard relocates to Manhattan to begin his new job and stays with Julien Bellaire, his mentor, who is also Richard’s Mate.

Before they can settle in, the Serbian mobster turns up dead and a corrupt cop who secretly works for the Serbians comes to New York with trumped up charges to pin the murder on Julio. With over eighty witnesses to Julio being on an airplane at the time of the murder, the cop abandons trying to frame Richard and instead plots to murder him. The loup garou request assistance from the Italian mob to protect Richard which comes with some interesting consequences.

Richard Kerrigan stood nervously in front of the director of his division’s desk for thirty minutes shifting his weight from one foot to the other while Ronald Kitteridge spoke on the phone and read an article in the Chicago Tribune, his desk littered with empty paper coffee cups and piles of newspapers. He did not ask him to sit down in one of the two black vinyl and chrome chairs in front of his desk. Kitteridge largely ignored him.

Finally, Richard, tired of being ignored, spoke up in a gruff voice. “Mr. Kitteridge, I’m sorry to disturb you, but there is something wrong with the power supply for the new Cougar II troop transport.”

“And how does this concern you?” Kitteridge didn’t raise his eyes from his newspaper to meet Richard’s.

Richard, shaking but determined, continued. “My original design contained components from Minster because they are our preferred vendor.”

Kitteridge looked at him over the top edge of the newspaper. “So…?”

“When we tested my design, the Minster parts caused the power supply unit to overheat, and it started a fire.” Kitteridge’s face grew hard. Richard felt his face mottle with anger. He knew what he was up against. “I changed the components to ones supplied by Charter because they had much higher heat tolerance specs and the design held. But production is using the Minster component despite the fact Charter was specified.”

“We use Minster parts for most of our products. Why should this be any different?” Mr. Kitteridge barked.

Richard was treading on thin ice, but he was determined to do the right thing. He peered down at his blurry reflection staring up at him from the highly polished floor. The floor and the slick modern office contrasted directly with the unholy mess on Kitteridge’s desk.

He tried again. “You can’t risk a fire in one of those vehicles, sir. For this application, Minster sells substandard parts. They don’t meet the specifications the government gave us. We have to stop production.” Richard Kerrigan’s hands clenched and sweat beaded on his brow and upper lip. Junior engineers didn’t go up against Kitteridge and keep their jobs.

“The failure rate is a little more than five percent which is perfectly acceptable.” Kitteridge took a sip from the one cup that still held coffee. The director had a Keurig machine behind his desk. Of course, he didn’t drink the sludge the junior engineers were given. Kitteridge stuck another cup under the brewer, lifted the lid and put in another packet.

Despite Kitteridge’s annoyance Richard continued. “These parts go into a military vehicle. We have a moral obligation to the troops to make sure that they get the best possible equipment. They’re in enough danger as it is, they shouldn’t be at risk from substandard parts. Five percent is five out of every hundred vehicles. That can’t be acceptable.”

Richard clenched his fists. Damn his red hair and light complexion. When he was angry, his face turned beet red. How he wished he didn’t give his feelings away so easily. His fingers tightened and released until his nails almost pierced his skin. He grabbed the back of the chair and held on so tight his nails made half-moons in the vinyl in his futile effort to keep his temper in check.

Kitteridge put down his newspaper. “This decision was made by management. It’s not your call, Kerrigan.” His tone was frosty. He stared at Richard as if he were a bothersome mosquito.

But Richard didn’t want to accept responsibility for substandard parts in his design that would cause vehicle fires and possibly take the lives of the soldiers driving those vehicles. Relentlessly, he pushed forward. “In this application, Mr. Kitteridge, any chance of fire is unacceptable.”

“It’s a risk that Switched Power Designs is willing to take. The parts from Minster saved the company millions. That’s all I want to hear from you on this subject. Go back out and do your job and leave the executive decisions to the people who are paid to make them.” Kitteridge turned away from Richard, dismissing him. He started to enter data into his computer.

Richard refused to leave. He raised his voice. “Mr. Kitteridge, I don’t think you understand what I’m telling you, people could die if we use the Minster parts.” He took a deep, calming breath. “It would be dishonest. The military tested units with the Charter parts.”

“Richard, you’re an excellent engineer, but you get too involved in production. That isn’t your responsibility. Let this go. If you don’t, things will go badly for you.” Kitteridge sent him a threatening scowl.

I can’t let this go. People could die. Richard left his office, but he persisted in his quest to do right by the troops. This would cost him his job, but he wouldn’t be responsible for one soldier losing his life because the company wanted to save twenty-five dollars per component in an eighteen-thousand-dollar power supply.

He began by going over Kitteridge’s head to the Vice President of Engineering where he got the same answer. The president of Switched Power refused to give him an appointment. After he exhausted all channels there, he finally called his congressman in desperation. He was called to testify at closed-door hearings, and new tests were performed on the power supply with the Minister parts. The part was deemed unacceptable. As a result, production ceased, and all of the Cougar II vehicles had to be retrofitted.

However, Richard was out of a job. As a whistleblower, Switched Power Designs shouldn’t have been able to fire him, but they accused him of insubordination and not being a team player. He didn’t have the money to hire a lawyer to fight his termination. They said he was fired with cause, and he received no letter of reference or severance.

Switched Power blacklisted Richard in Chicago, and he didn’t have the money to start somewhere new. Earlier that year he used his savings to put his mother in a hospice to make sure she was cared for properly while she was dying from breast cancer. Now, Mom was gone, he had no job, and unemployment had run out. Stuck in a life of unrelenting poverty, he lost his apartment. Richard got a job at as a check-out clerk in a local grocery and at night he worked as a bartender managing to barely make the rent for a furnished studio in a not-so-nice neighborhood. He sold his furniture and his car. All the money he had to spare went toward his college loans. He had protein bars for breakfast and ate a burger at the bar for dinner. The only things he kept from his old life was his computer and cell phone. He used the service at Kinko’s to print out his resumes.

He hadn’t given up; it wasn’t in his personality, so he still spent money applying for technical positions in the Chicago area. But the specter of his actions at Switched Power Designs followed him everywhere, and it all seemed hopeless.

Then there was Davilor Kasun, his own personal nemesis,who was a tough in the Serbian mob and wanted his ass. So far, Kasun hadn’t been able to find out where Richard lived, but it was only a matter of time. He should move out of Chicago if he wanted to stay healthy but he didn’t have the funds. He had nothing and soon he might not even have his life if he refused Kasun’s advances again. If Kasun found out where he lived, he’d rape him and be done with it.

It’s Saturday at noon. What is your character doing? Give details. If they’re eating breakfast, what exactly do they eat? If they’re stretching out in the backyard to sun, what kind of blanket or towel does they lie on?

Richard lives in a furnished apartment. His linens are his own and are of decent quality. They are almost the only things in the apartment that are.

What is one strong memory that has stuck with your character from childhood? Why is it so powerful and lasting?

The day he left his friend Julio sitting and waiting on his step for his parents.

Your character is getting ready for a night out. Where will they be going? What do they wear? Who will they be with?

Richard has two jobs. He doesn’t do night’s out. At night he bartends at a dive bar near his apartment.

An E-Copy of Wolf Whistle and Julio's Wolf

AC Katt didn’t discover her muse until she was older. She loves to write and now writes constantly. She just moved from New Mexico back to New Jersey with her husband and her naughty cat Bandit, who lives up to his name. 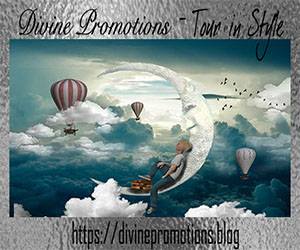 Hosted By Divine Promotions
https://divinepromotions.blog
Posted by Wicked Faerie's Tales and Reviews at 2/08/2017 08:00:00 AM