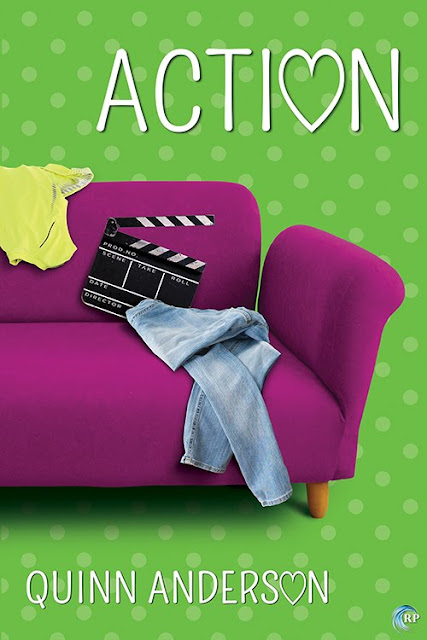 Pete is in a rut, though, and he knows it. And what’s worse, his boss knows it. If he can’t reignite his passion for the biz, he’s going to have trouble paying his none-too-cheap college tuition.

The Murmur Inc. series centers around the lives of people who engage in various forms of sex work, from porn to phone sex and beyond. I’m far from the first author to tackle the subject, but I have made it a point to not use sex work solely as a plot device in my novels. It’s not just an easy way to get my characters to sleep with each other. Sex work has real-life consequences: stigma, emotional trauma, financial struggles, and more. Though I do make sure to still inject all the fun and steaminess that come with the job. 😉

I’m not going to give out spoilers, but if you read Action, you might get some new insights into what it’s like to be a sex worker with strong roots.

Thanks for reading, and good luck in the giveaway!

To celebrate the release of Action, one lucky winner will receive a $10 Riptide credit! Leave a comment with your contact info to enter the contest. Entries close at midnight, Eastern time, on June 10, 2017. Contest is NOT restricted to U.S. entries. Thanks for following the tour, and don’t forget to leave your contact info!