Being With Him by Mickie B. Ashling - Blog Tour with Guest Post, Excerpt and Giveaway 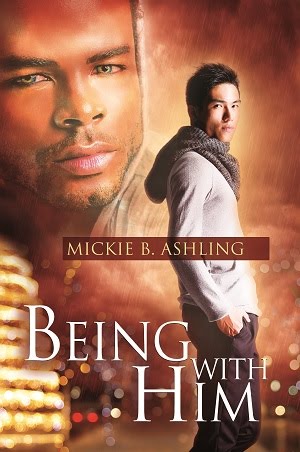 
Zeb Araneda leaves his privileged but closely supervised life in the Philippines to study architecture at Cornell University in Ithaca, New York, where his new roommate is openly gay Luca Dilorio.

Alex Boulet is a successful print model who appears to have it all, but on closer inspection, the ready smile never reaches his mesmerizing green eyes. Tired of living alone, Alex moves in with fellow model Chyna Davidson, Luca’s boyfriend.

Away from his father’s watchful eye, and with Luca’s help, Zeb learns to navigate his new environment, and experiences freedom of choice for the first time. This fresh perspective allows him to step out of his comfort zone and act on his attraction to Alex.

The holiday season has always been difficult for Alex. Sappy commercials tug at his heart, and storefront windows depict idealized scenes that remind him of what he’ll never have: a loving partner willing to accept his truth. Will this Christmas be another disappointment, or will Santa finally make his wish come true?

Zeb Araneda tried to concentrate on his roommate’s queer tutorial. With gay dads who led by example—and his own out and proud status—Luca Dilorio knew a lot about being in a same-sex relationship, and felt duty bound to teach him the basics.
Because Zeb was clueless.
And a recently hatched queer.
In love with Alex Boulet, the stunning trans guy who graced this month’s cover of GQ magazine.
“Dude, are you listening?” Luca asked when Zeb didn’t respond.
“Sorry—what?”
“Repeat after me so I’ll know you understand.”
“Quit it,” Zeb grumbled. “I might be new at this relationship, but I’m a smart guy.”
“In case you need a refresher,” Luca persisted. “Rule number one, no PDAs, rule number….”

Zeb sighed and allowed Luca’s words of wisdom to trail off to another section of his brain. Great at compartmentalizing, Zeb tucked away today’s lessons, having every intention of revisiting at a later date.
He realized knowledge was crucial to the success of his romance, but right then, he couldn’t focus for shit. All he wanted to do was pack his bag and catch the bus to Manhattan to start Christmas Break with his lover.
Luca and his boyfriend, Chyna, Alex’s roommate, were flying off to Grand Turk Island to meet up with assorted family members. Which meant he and Alex would have the entire apartment to themselves—for seven days!

Zeb’s friendship with Luca had gotten off to a rocky start back in late August when they’d first laid eyes on each other. He could still remember the outrage in Luca’s voice.
“Dude! You’ll have to downsize. There’s no room for all your crap.”
“Right,” Zeb agreed. “Poor planning on my part.”
“I’m Luca,” he offered, sinking down on a bed. “We’re stuck with each other for a year, so let’s try and make the most of it. Why not start with some ground rules?”
“My name is Zeb, and rules work for me.”
“Good,” Luca said absently, glancing at his phone. He tossed it to the side. “Da fuck.”
“What’s wrong?” Zeb asked. “Girlfriend troubles already?”
“Boyfriend,” Luca clarified. “He’s not picking up his phone or answering my texts.”
Zeb blinked and did his best not to react to the revelation that Luca was gay. It was the last thing he’d expected but a huge relief. Maybe he’d finally get some answers to the questions that had been plaguing him for a while.
“Where is he?” Zeb asked.
“Manhattan.”
“What’s he doing there?”
“Modeling.”
“Wow.” Zeb approved. “Sure beats college.”
Luca studied Zeb. “What are you doing here if you’d rather be somewhere else?”
“My parents decided I was going to be an architect the minute I was born. No one bothered to ask if that’s what I wanted.”
“That blows,” Luca said sympathetically.
“Back home it’s like that,” Zeb explained.
“Where’s home?”
“The Philippines.”
“My mom’s Filipino,” Luca mentioned. “She can be a bit Napoleonic at times. Drives my dad nuts.”
Zeb hooted. “Are they still married?”
“They never were.”
“Ouch. How come?”
“My dad’s gay,” Luca said evenly. “I was an accident, but he says it was the best thing that ever happened to him.”

“He can’t be that gay if he got it up for a chick.”
“No, he’s definitely gay. What happened with my mom was a one-off.”
“I can’t believe you’re so accepting,” Zeb commented.
Luca squinted. “Do you have a problem with gays? Tell me now and I’ll request a new roommate.”
“No, not at all,” Zeb said quickly. “I’m totally cool with your orientation, but my family’s strictly Catholic and they frown on same-sex love. I admire your self-confidence.”
“I’ve had my own run-ins with the Catholic Church, and I can tell you they’re full of shit. Love is love. Period. You’ll never hear me complain about my childhood. I’ve got the two best dads in the world, and my mom and her husband—who also happens to be my dad’s brother—have given me a great life.”
Zeb’s eyes widened in shock. “Did you just say your dad’s brother is married to your mother?”
Luca smiled. “Yup.”
Zeb leaned forward. “So he’s your uncle/stepfather?”
“Which part of this aren’t you getting?” Luca asked.
“No blood was spilled?”
“Nah,” Luca said. “It’s ancient history. We’re one big, happy blended family now. I have a half sister who’s also my first cousin.”
“Dude, that’s convoluted as hell.”
Luca snorted. “How about I unravel the mysteries of my family tree over pizza? It’ll take my mind off Chyna for a bit.”

Zeb still had a hard time figuring out Luca’s intricate family dynamic. As days turned into weeks, and more info was shared, a solid friendship was born. Perhaps it was because Luca was half Filipino himself and understood parts of Zeb’s culture most strangers found perplexing and somewhat annoying. Like Zeb’s complete lack of basic survival skills. When he first arrived at Cornell, he had no idea how to use a washing machine or dryer.

“Dude, you’re clueless,” Luca remarked the first time he watched Zeb frowning at his pile of formerly white undershirts and briefs. They’d turned an ugly shade of gray after he’d washed them with several pairs of black jeans. The jeans themselves were dotted with white lint.
“Am I going to have to buy new underwear?” Zeb asked plaintively. “Most of this stuff is brand-new. And those are Diesel pants!”

“Next time, separate the whites from the darks,” Luca advised. “We can probably salvage your underwear with bleach, or you can go commando.”
“Hell no! I don’t want my dick caught in the zipper.”
“Yeah, you’d end up in the ER for sure,” Luca predicted, shaking his head. “Grab the bleach.”
“What about the jeans?”
“We’ll wash them again,” Luca said. “Fucking high maintenance….”

Luca warned him to get with the program or end up spending all his money at the cleaners. So he did. Life lessons with his anal-retentive roommate had been painstakingly awkward at times, but more often than not, they reduced them both to hysterical laughter.

Zeb made up for his domestic malfunctions by killing it in the classroom. Always a great student, he excelled in math and drafting, very often helping Luca. It was his way of repaying the embarrassing hand-holding.
Since September, he’d perfected his laundry smarts, kept his space tidy, stopped his whining about having to take a bus rather than be chauffeured, and begrudgingly did his own manis and pedis, a luxury he missed above all others. He knew there were nail salons outside campus, but nothing beat having the technician come to your house every other week.

Luca’s lessons on American living had slowly dropped off as Zeb became acclimated to his new world. Caught up in his own relationship, Luca didn’t pay much attention to Zeb’s new romance until after Thanksgiving. By then, he and Alex had spent the holiday together and were definitely a couple. When Zeb admitted he’d fallen hard, Luca embarked on another mission. Teaching Zeb how to keep a low profile to avoid getting his or his boyfriend’s head bashed in.

Not that Zeb was flamboyant or anything, but he was a touchy-feely type of guy and had a tendency to forget that PDAs weren’t always welcome, especially between two men. Since the latest presidential election, the tide of public opinion with regards to same-sex love was shifting back to the Dark Ages, and it was imperative Zeb realize he couldn’t act like he was in a heterosexual relationship. No matter how much he wanted to climb Alex’s bones, he had to wait until they were in a safe place.

Alex himself was more than aware of the pitfalls. Transgender men or women were like blinking lights, drawing haters for no good reason. Throw in Alex’s biracial card, and he might as well draw a bull’s-eye on his forehead. Mindless aggression against people of color, or the men and women brave enough to live their authentic lives, was all too common.

It certainly explained why Alex kept a low profile in public. It was difficult to blend in with a crowd when you were over six feet tall and drop-dead gorgeous, but Alex managed it by muting his colors, wearing a beanie or ball cap, and generally keeping his head down. A pity, in Zeb’s opinion, because underneath the drab black and gray beat the heart and soul of a beautiful peacock. Alex was a photographer’s dream, after all, and loved preening in front of the camera. Fashion was his thing, and dressing down instead of up went against his very nature, but there had been an incident in his past. Something he’d alluded to but hadn’t shared, and his fear of attracting unwanted attention when he wasn’t in front of a camera was palpable.

Zeb could understand Alex’s reticence, considering how quickly they’d gone from friends to lovers. Perhaps Alex felt it was more prudent to take a wait-and-see attitude rather than possibly sabotage their budding relationship with an injection of harsh truth. For the next week, they would bask in the glow of new beginnings, and if Alex felt comfortable enough to talk about his past, then Zeb would lend a sympathetic ear.

Happy Holidays and thank you for helping me celebrate the release of my Christmas novella, Being With Him. This is a standalone featuring Zeb and Alex, the newest members of the Horizons family.
As part of my 12 days of Christmas blog tour, I bring you a different recipe each day from Alex’s kitchen aka Southern Living. This man can cook and Zeb is the lucky recipient of his vast culinary arsenal. There’s also a $25.00 Dreamspinner Press gift certificate for one lucky winner. 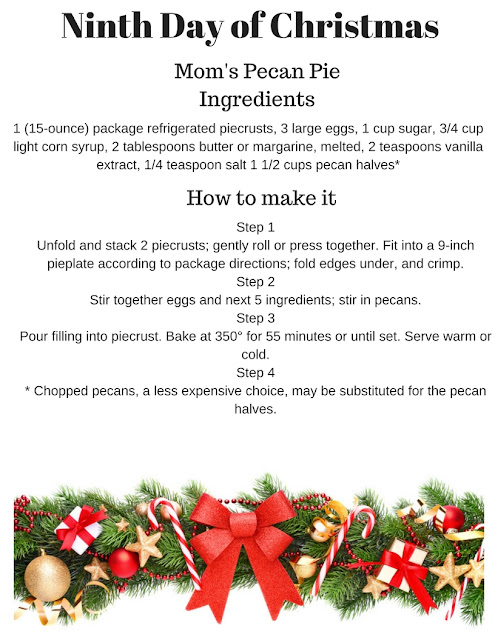 Mickie B. Ashling is the pseudonym of a multifaceted woman who is a product of her upbringing in multiple cultures, having lived in Japan, the Philippines, Spain, and the Middle East. Fluent in three languages, she’s a citizen of the world and an interesting mixture of East and West. A little bit of this and a lot of that have brought a unique touch to her literary voice she could never learn from textbooks. By the time Mickie discovered her talent for writing, real life got in the way, and the business of raising four sons took priority. With the advent of e-publishing—and the inevitable emptying nest—dreams of becoming a published writer were resurrected and she’s never looked back. She stumbled into the world of men who love men in 2002 and continues to draw inspiration from their ongoing struggle to find equality and happiness in this oftentimes skewed and intolerant world. Her award-winning novels have been called “gut-wrenching, daring, and thought provoking.” She admits to being an angst queen and making her men work damn hard for their happy endings. Mickie currently resides in a suburb outside Chicago.