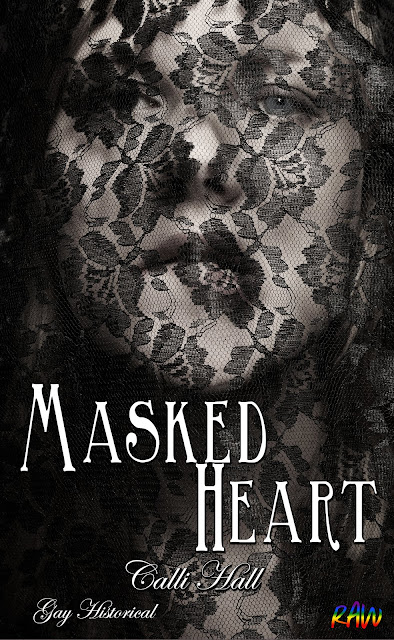 Benedict, Duke of Lexerton, faces a problem. After his brother’s sudden passing, he is confronted with the necessity to find a spouse.

Trying to fulfill his obligation at the events of high society, he repeatedly encounters a strange woman. Who is this mysterious Madame P. and how is she connected to his brother’s death?

A gay historical thriller about forbidden passions, power and a deadly secret society.

Overwhelmed, Benedikt watched the salty droplets fall. He wanted him to stop crying, to comfort him, to take him in his arms. Amazed at himself, he watched as he placed his hand under the young man’s chin and forced him to look at him.

Sorrow shone in the redhead’s eyes so palpably that he felt it like his own. Was it his fault? He felt the painful emotion of loss as the young man withdrew from his touch.

He looked at his fingers in wonder. His fingertips were tingling where they had touched him. What was this?

Afterward he desired to touch that strange skin again. However, this time his counterpart avoided his touch. Upset and confused, the Duke retracted his hand. Doubts began to gnaw at him. Was he only imagining the bond between them? Did he at all have the right to desire answers he didn’t even know the questions to?

Small hands gently enveloped his right one, which was sitting motionless on the table. His first impulse should have been to wrench it away, but the warmth radiating from the small man was like a light in the darkness.

“Why are you here?” The young man’s words were hardly more than a whisper in the silence. “Because I wanted to hear it from you.”

Benedikt was stubbornly insisting on something, though he didn't know what it was. However, the blond felt that only the other man could give it to him— he and he alone. Maybe he had gone crazy?

“You don’t know what you want. I can’t be a shadow anymore. I would destroy your world and tear you down with me. There is no end to this path of thorns. Let’s leave it at that.”

The strange fingers squeezed his one last time before releasing them with a jerk. Cold surrounded the Duke.

How long had he been in the dungeon? How long had it been since his darkened eyes had seen anything other than his dark cell?

Too long. Long ago, after his voice had broken, he had given up the screaming, which had echoed back to him from the halls of this Hell. Unheard.

Now he had become like his guards, deaf to the suffering that reached his ears. He didn’t hear it at all anymore, didn’t feel the cold that ate through his bones, nor the hunger in his stomach. The rustling of the rats, the disgust at these vermin, the thirst that burned in his throat: all of this he had learned to suppress.

Only the stink in his nose had eaten into him worse than the scar on his face. He had always been sensitive to smell. Since his early childhood it had been his most highly developed sense. He used to dream of becoming a perfume maker and of creating the finest scents. He twisted his mouth ironically. Look how far these senseless dreams had brought him. He had been waiting for his execution for months.

The hope from the first week of the trial and the belief he could prove his innocence had died. They were as dead as he soon would hopefully be. Long was he beyond the phases of blind rage, hate of the unknown person, who he had to thank for all of this, as well as sadness, hope, and doubt.

He only desired the rope that would free him from this dungeon, in which a small piece of his soul broke night after night.

Thunder rumbled overhead. He only guessed at the following lightning. Not even that found a way in to illuminate his forced home. The blackness held him with an iron grip.

Bored, the prisoner broke a piece off the moldy edge of his bread. The furry nose of his roommate immediately appeared through a crack. It sniffed in every direction before the small animal made its way to him, careful and alert.

What irony. This rat and he now had the same status in the eye of society. Not much was left to differentiate between them. Both of their daily lives consisted of the hope for a little moldy bread. The squeaking of the cell door scared the dirty brown animal away. He didn’t react to it anymore. It was too late in the day for his guards to have remembered to bring him something to eat or to take him to the gallows.

Bile wanted to rise up in his throat. Quietly he balled his bony hands into fists to try to suppress the familiar shaking. He had learned not to defend himself when they set upon him, to just close his eyes and hope that it would be over soon.

On his first night in this Hell he had given up prayer, on the second night begging for mercy. However this time it was not the smell of cheap schnapps that filled his tiny room. It was as if he were suddenly standing on the deck of a ship in the eye of a storm. He could feel the powerful waves beneath him, how the ship swayed, how the rain hit him in his face and the wind tugged at his hair.

Instinctively the prisoner shook his head to shoo off the bittersweet delusions his nose was giving him. Never again would he stand on the planks of a ship.

The stranger stood quietly in the doorway.

An icy watcher was eying the prisoner’s back. Even if he couldn’t see him, he still felt him and how the sharp look penetrated beneath his cracked skin into his deepest chasms.

However, for him the eyes were not his most important means of recognizing people. Rain and sea. He tasted its scent on his tongue. Interested, his tired eyes rose to meet the visitor.

Ever since Calli was released into the world in 1986, she's  been driving everyone around her crazy. She spends the nights in a bed of books, fighting with her dog Toby for the blanket. As she lost the fight once more, she started writing, because the TV program at 3 am is simply awful. She's a huge fan of Gay Romance and Yaoi Mangas, so she knew exactly what she wanted to write about, and her sister Carla reads the midnight creations pretty willingly.

However, if the guys don't get their happy ending, she'll beat Calli until there's enough sugar in the story (and the happy ending). Covered in bruises and tired, she hopes you'll enjoy her books as much as Toby enjoys his place in Calli's bed.