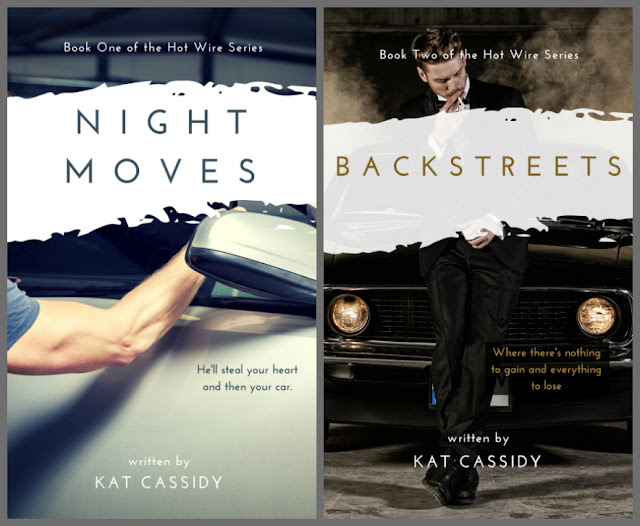 “He’ll steal your heart and then your car.”

Peter Bauer is a career car thief with more skeletons in his closet than four-figure suits. Nikos Petrakis is a mechanic who's found himself on the wrong side of the law because of a secret of his own. Brought together by circumstance and a '65 Shelby Cobra, they'll have to navigate L.A.'s seedy underbelly in the sweet with heat world of Hot Wire.

“Where there’s nothing to gain and everything to lose.”

It’s modest, but after a lifetime spent barely holding on, former car thief Peter Bauer is proud of what he’s managed to achieve. He’s got a legal, legitimate job as a mechanic, a firm grasp on his addictions, and a steady relationship with Nikos Petrakis—stable, handsome, and recently widowed. Nothing is going to upset that, not the ever-present memory of Nik's wife, not the claustrophobia Peter is starting to feel trapped in domestic bliss, not even the sudden reappearance of Peter's ex—the sexy and dangerous Stavros Giannopoulos.

But when Nik's daughter goes missing, Peter will be forced back into the seedy underbelly of the LA crime world, where anything goes. Can his and Nik's relationship survive? Can Peter?

Backstreets is the second book in Kat Cassidy’s Hot Wire series which contains themes of crime, suspense, family drama, hurt/comfort, dark humor, addiction, and abuse. It should not be read as a standalone.

Kat Cassidy is a romance novelist. She’s a dreamer, a schemer and, above all else, a believer in true love. She lives in Canada with her husband and her lovable mutt, and she likes loud guitars and strong IPAs.

Her debut novel, Night Moves, has been nominated for the Goodreads M/M Romance Members’ Choice Awards Best of 2018 for both Best Debut Book and Best Main Character.