Step Up With Me by Kris Jacen - Release Blitz with Giveaway 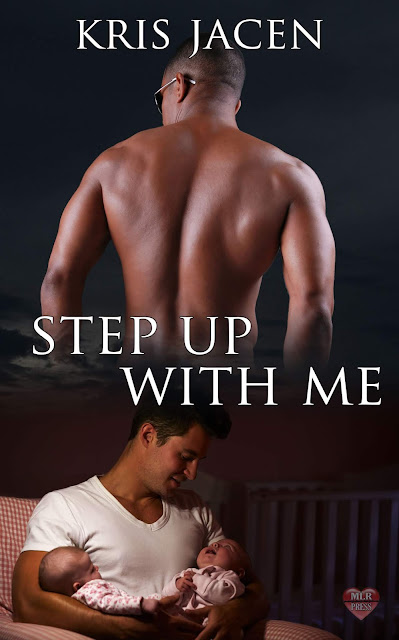 Richard “Tank” Martin was a big boy from the start. Born weighing over 11 pounds, he didn’t stop growing. When he was in middle school, a football coach took him under his wing and finally explained to him the mystery of calories in, calories out and from then on it was all good for him. At least he thought. Being called to meet with his platoon sergeant and told that he was now part of the Army’s overweight program, sent him into a spin that only his crews can help him out of.

Dr. Jack Dillon thought his life was good and finally settled. Part of an active veterinarian practice, volunteering with a service dog organization, spoiling his sister’s triplets and training in sports jui-jitsu…the only this missing was a partner. He never thought that his world could be shattered with just a phone call even after being around his military friends.

Tank and Jack have been dancing around each other for months until Tank takes a chance and kisses Jack at their friends’ wedding moving their slow dance into a heated bump and grind. Can these two survive the changes coming their ways together or will all the changes break them apart?

Kris Jacen grew up just north of Boston, Massachusetts, met her soldier in high school but didn’t marry him until almost ten years later. She moved around with him and their daughters (born in two different states thanks to the Army) for the first 19 years of their marriage (they celebrated their silver anniversary in 2018) before settling in western New York.

She has been the Editor in Chief and Formatting Director for ManLoveRomance Press and its imprints since January of 2008 and has never looked back. Working with the amazing authors at MLR has allowed her to both hone her editorial skills and indulge her inner fangirl. She also acts as editor, mentor and sounding-board for newcomers which lets her “pay-it-forward” and help authors realize their dreams.

You can find out more about Kris on her website www.krisjacen.com.