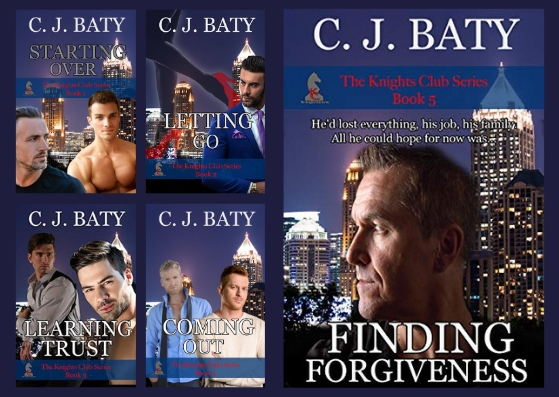 The Knights Club (formerly the Gentleman’s Club) first appeared in the Warfield Hotel Mysteries Series. It was owned by Stony Whitecastle and is located in Atlanta, GA. At the beginning of the Knights Club/Starting Over, Stony is selling the club to Xavier Knight. He renames the club the Knights Club and instead of a private club opens it the public. Some patrons still hold membership though.

This series involves Xavier and his crew of employees and their involvement with a local police family. We meet Sebastian Brady in Starting Over along with his dysfunctional family. Seb’s struggle with his homophobic oldest brother and the shadow of his dead father, Detective Delmonico Brady, haunts Seb as he tries to make a new life for himself.

Occasionally, a character from the Warfield Hotel series will pop up but they are not central to the story line. Everyone who works at the Knights Club has a past and secret they are running from. They are mixed bag of people who have been suffered many things. The Knights Club is their home and the people who work there are their families. But, even families don’t like each other all the time…

Xavier Knight lied and now his past was catching up to him. Sebastian Brady meant everything to him. Losing him wasn’t an option Xavier was ready to accept. Ghosts from his past threaten to open up a secret that needs to stay hidden. He wasn’t going to let Zach Brady or anyone else take his happiness away from him.

Zachary Brady had lived in the shadow of his father his entire life. He’d lost his family, his job—everything. What happened between him and Xavier Knight was long ago and best forgotten. He wasn’t going to allow it to sabotage his chance to be accepted by his brothers and sister as family again.

Neither man realizes that they don’t hold the key to their peace of mind. And when the truth is revealed, it will shake their worlds. Family isn’t always the one you are born into, sometimes it’s the one you create for yourself.

C. J. Baty lives in southwest Ohio. Her heart, however, lives in the mountains of Tennessee where she hopes to retire some day. The mountains have always provided her with inspiration and a soothing balm to the stresses of everyday life.
The dream of writing her own stories started in high school but was left on the back burner of life until her son introduced her to fan fiction and encouraged her to give it a try. She found that her passion for telling a story was still there and writing them down to share with others was much more thrilling than she had ever expected.

She has a loving and supportive family who don't mind fixing their own meals when she is in the middle of a story, and a network of friends who have encouraged and cheered her on in her quest of being an author.

One thing she has learned from life and she is often heard to say is: “You are never too old to follow your dream!”