Early to Rise by V.L. Locey - Book Blast with Giveaway 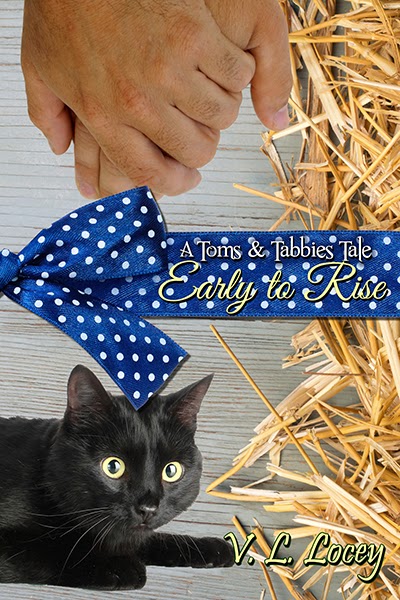 There are few things worse than being left at the altar by the man you thought loved you. Just ask Simon Wilder. He knows all about it. He also knows a thing or two about getting fired. It`s been a rotten week for Simon and making major life decisions during such turmoil may not be the wisest thing Simon has ever done. Or is it?

Packing up his clothes, his collection of Tony Orlando CD`s, and his cat, Sambuca, Simon leaves the hustle and bustle of Philadelphia behind and heads out to live on his uncle Tiberius` farm in the mountains of Pennsylvania. Starting over on the farm where he vacationed once as a child is a going to be just what the doctor ordered, as long as that doctor is the good-looking large animal veterinarian, Gentry Martin. Is a sexy country vet the cure for a love-sick city boy?

Excerpt:
"Welcome to Elderberry Grove. You passing through?" He offered his hand and I shook it. Then I reluctantly released his hand and busied myself with putting my watch back on.

"No, actually I'm going to be moving into--"

A sharp blast on a horn cut me off. Handsome-As-Hell and I both whipped around to find a huge white pig tooting the horn of the old blue Chevy pickup parked beside my Captiva. My mouth literally dropped open.

"Shit. I forgot how she gets when her coffee is late. Nice meeting you!" the man who saved my life grinned. Good thing I had my vehicle behind me or I would have melted like an ice cream cone in August at his flashing white teeth.

Dumbstruck, I watched the man grab a takeout container holding two large cups of coffee off my hood then run to the porker resting her cloven hooves on the steering wheel.

With a grin and a wave, he and his swine friend rattled off down the two-lane in the direction of Elderberry Grove's booming downtown section. I closed my mouth.

"I get the feeling we're not in Port Richmond anymore," I muttered, eyes glued to the departing blue tailgate. Sambuca hissed at me in reply.

V.L. Locey loves worn jeans, belly laughs, reading and writing lusty tales, Greek mythology, the New York Rangers, comic books, and coffee. (Not necessarily in that order.) She shares her life with her husband, her daughter, one dog, two cats, a flock of assorted goofy domestic fowl, and three steers.
When not writing spicy romances, she enjoys spending her day with her menagerie in the rolling hills of Pennsylvania with a cup of fresh java in hand. She can also be found online on Facebook, Twitter, Pinterest, tsú, and GoodReads. 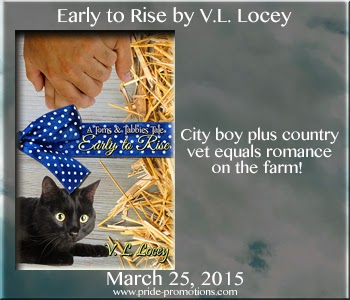