Master of No One by Tricia Owens - Book Tour with Giveaway 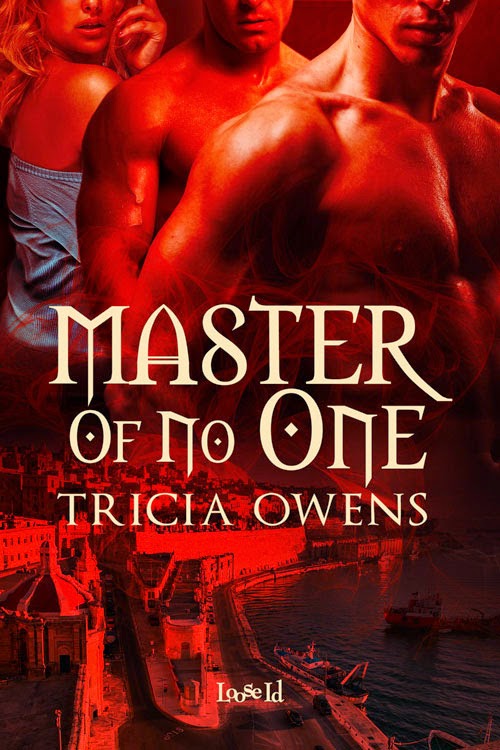 Aleksander is short-tempered, antisocial and though he’s unaware of it, wildly sexy. He’s also a naturally dominant shape-shifting monster who’s sliding into madness. He needs a human ‘grounder’ to submit to him and draw forth his protective human side. Instead he is given two humans: Constance, a fledgling sub with a reckless streak whose intense desire to serve has brought her nothing but heartache, and Kirk, a former NYPD cop who's trying to subdue his own alpha instincts and play submissive in order to fulfill a family debt.

But once these grounders meet their new master, they quickly discover that in order to save Aleksander from himself, they must alter their assigned roles and form a unique triad of domination and submission that goes against Aleksander’s very nature. Constance needs to convince Aleksander he can be gentle and protective, while Kirk wants to show him there is freedom in surrendering to another dominant. The task isn't easy, though: Aleksander fights them every step of the way, and a conspiracy surfaces which not even a creature as powerful as Aleksander may be able to overcome.

Aleksander huffed. “That’s right. You told Michel you’re my grounder. Interesting strategy putting yourself in an immediate position of inferiority against him.”
“Is it inferior? I got the impression a grounder is the only thing that’s going to keep you from falling apart.” Kirk smiled as the other male clenched his jaw. “Seems like a pretty important role, if you ask me.”
“And how do you expect to fulfill your role?”
Kirk idly adjusted the fit of his jeans, hoping Aleksander hadn’t noticed that they’d begun to grow tight in the crotch. Something about Aleksander got him going. Maybe it was the attitude, which seemed to be a prerequisite amongst chimera. It made Kirk want to take him down a peg and stand over him after he’d fallen.
Nothing like some homoerotic imagery there, he chided himself.
“I’m here to help,” he said.
Aleksander traced his tongue across his bottom lip. “As Constance ‘helps’?”
Kirk resisted the impulse to laugh and play it off. It would be a nervous tell and he wasn’t about to give Aleksander the satisfaction. “I was thinking more along the lines of being a friend who helps you let off steam. Physically.” When the chimera’s lips twitched, he quickly added, “I mean like boxing. Or sports. Whatever it is you do to keep in shape.” He motioned vaguely at the other male’s body. “Do you run, or workout or—”
“You couldn’t last with or against me, little human. You’re no use to me in that way.” Aleksander panned down Kirk’s body. “Though you’re fit and...large for your kind.” A crease appeared in his forehead and he resumed staring into his glass.
Fit and large? If you only knew, buddy.

Tricia has been writing m/m fiction since 2002 when she opened her fiction website JuxtaposeFantasy to great success. She later partnered to create Joyboy Island. After a decade of writing for the sites, Tricia decided business demands were distracting her from producing novels, so she closed the sites and now writes at her leisure. An avid traveler, Tricia has visited over 60 countries and tries to include aspects of her global experience in her books. 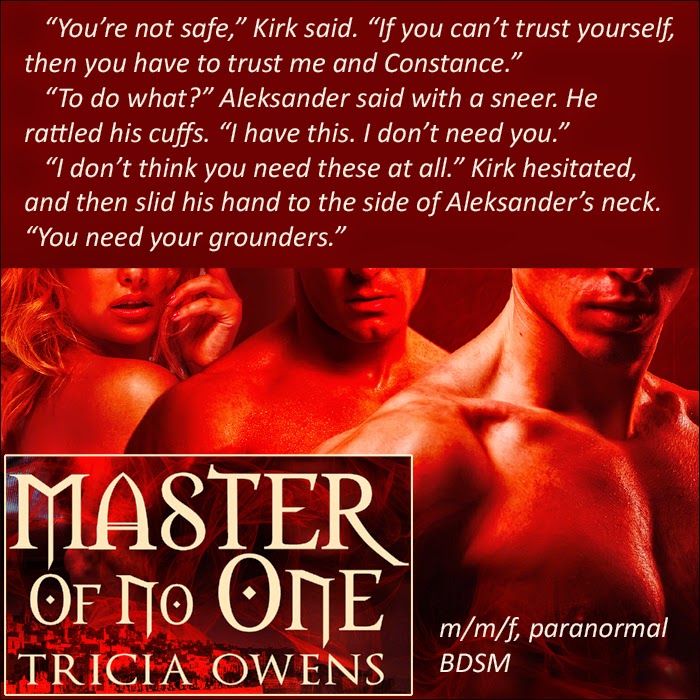 Rafflecopter Prize: E-copy of ‘Master of No One’