Ever The Same by B.A. Tortuga - Book Tour with exclusive excerpt and Giveaway 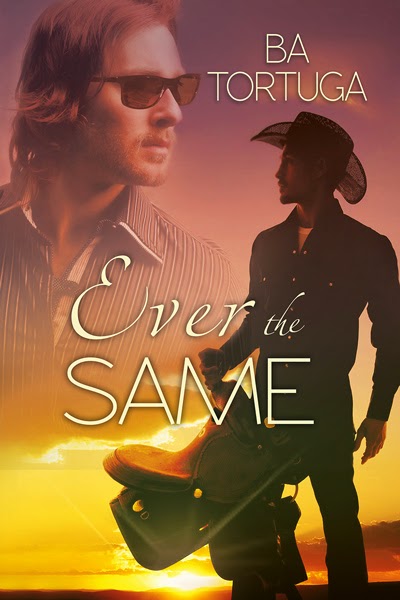 Audie Barrack is in it up to his elbows with a sick calf when his son’s school calls. Seems Grainger has gotten into yet another fight. When he walks into the principal’s office, he’s shocked to find his son has been fighting with a little girl named Randi.

A little girl with one blind dad and one dad who recently passed away.

Dixon has lost his sight, his career, and his husband. Thank God for his brothers, Momma and Daddy, and his little girl, or he would simply give up. The last thing he needs is for Randi to start trouble at school, especially trouble that puts him in contact with another dad who might expect him to be a functional human being.

Dixon is struggling to live as a blind man, Audie is terrified someone might see he has a closet to come out of, and everyone from the school to both men’s families is worried for the men and their children. Unless they get themselves together and commit to change, neither of them stands a chance.

Excerpt:
“It’s not like him to pick on someone who’s having a hard time.”

“Of course it’s not. Randi’s the one that’s the vicious little bitch, right?”

“What? She’s had a shit life for the last year. She lost one of her dads, she had to leave Austin and her friends and her school, and suddenly she’s the fucking bad guy?”

“Hey, I never said my boy was perfect,” Audie said, snarling a little himself. “He’s managed to get to six without trying to kill anyone, though, so this is new. Back off.”

This was ridiculous. It wasn’t his fucking job to make sure this asshole’s little brat felt like she didn’t need to punch his son anymore.

“That’s her teacher’s job, Shannon.” Audie was through with this shit. “I’ll tell my boy to stay away from her. Can we go now?”

Exclusive Bonus Excerpt
“Oh.” Audie seemed to ponder that a long time. “I can tell you. Let you touch.”

His entire body went “sproing!” and he missed the french fries, the plate clattering. “Yes.”

“Okay. Uh, whenever you want.” Audie helped him get his food back into alignment.

“Thank you. I…. Do you live with your mom and your sister?”

“Mom lives just up the road. Gracie and Sara stay with them. Mostly it’s just me and Grainger.”

It was so fucking weird, to not know this stuff, to not know how to go get Randi. What if she had an emergency, or just a panic attack?

“Oh, honey, your face shows everything.” Audie sounded sympathetic but not pitying. He heard pity all the time.
Pages or Words: 256 pages
Author Bio:

Texan to the bone and an unrepentant Daddy's Girl, BA Tortuga spends her days with her basset hounds, getting tattooed, texting her sisters, and eating Mexican food. When she's not doing that, she's writing. She spends her days off watching rodeo, knitting and surfing porn sites in the name of research. BA's personal saviors include her wife, Julia Talbot, her best friend, Sean Michael, and coffee. Lots of coffee. Really good coffee.
Having written everything from fist-fighting rednecks to hard-core cowboys to werewolves, BA does her damnedest to tell the stories of her heart, which was raised in Northeast Texas, but has headed to the high desert mountains. With books ranging from hard-hitting GLBT romance, to fiery menages, to the most traditional of love stories, BA refuses to be pigeon-holed by anyone but the voices in her head. 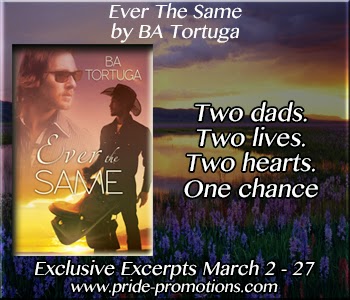 Rafflecopter Prize: Signed paperback copy of Ever The Same