When a man is found in his apartment, appearing to have committed hara kiri with a samurai sword, Boston Homicide Detective Jack Cade suspects more is going on than what it appears. The department’s criminal profiler has left and a new guy is taking his place. At first, Cade is skeptical of Dr. Michael Di Santo. Di Santo seems so absent-minded and too neurotic to be effective. But he is brilliant and hot and Cade finds himself falling hard and fast, both in lust and in love. The attraction is mutual, although Michael's past demons haunt him, keeping him from getting too close. Together, they begin to unravel Michael's emotional knots even as they close in on a killer, another brilliant, wily person whose sights are now set on Michael. 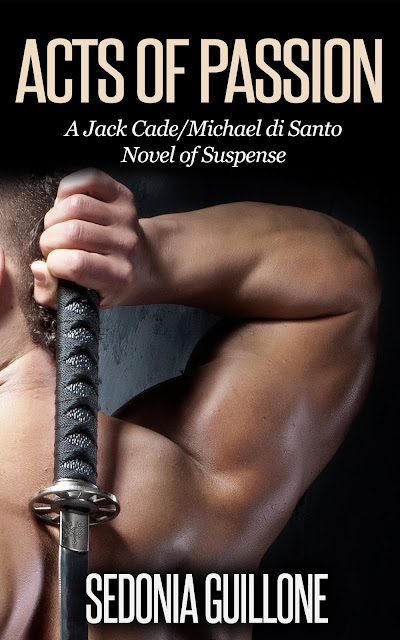 Cade’s appearance had taken Michael completely by surprise. He glanced at the man’s hands. Large, strong-looking hands that matched his physique, such as it appeared under a fashionable tan leather blazer, retro-style shirt print with the large collar and hip-level slacks. Even his dark blond hair, a short spiky cut with large sideburns, was a sharp contrast to his own boringness.​

There are more teasers for you to read at –

Sedonia welcomes comments from readers. You can find her website and email address on her author bio page at www.sedoniaguillone.com.

One lucky commenter will win an e-copy from Sedonia Guillone’s backlist.
Simply tell us what you think of the cover and the book in order to enter this contest.