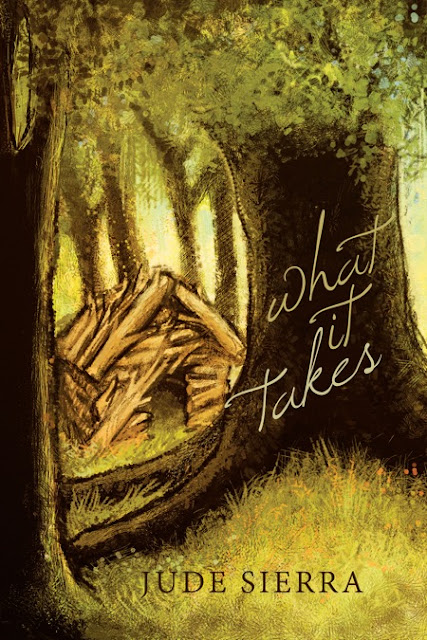 The connection was instantaneous.

Mere moments after Milo Graham's family relocates to Cape Cod, he meets Andrew Witherell—launching a lifelong friendship built on a foundation of deep bonds, secret forts, and plans for the future. When Milo is called home from college to attend his domineering father's funeral, he and Andrew finally act on their mutual attraction. But doubtful of his worth, Milo severs all ties with his childhood friend.

Years later, the men find themselves home again, and their long-held feelings will not be denied. But will they have what it takes to find lasting love?

Excerpt:
Andrew gladly lets Milo drive his car; he hates driving, especially when he can play radio DJ and watch the scenery go by. He looks at Milo: the way the fading light before dusk changes the tone of his skin; the way the muscles of his arms stand out and his lips curl as he sings along, awfully, to the radio. Milo smiles at him and Andrew flashes a brief one back, wonders how obvious he’s being, and looks back out the window at the slipping sand that spills onto the road and the ramshackle businesses along the road.
“So what got this bee in your bonnet?” he asks suddenly.
Milo shrugs. “You sound like my grandma.”
“Awesome; I like her. Let’s focus.”
“So... okay.” Milo clears his throat and his fingers tighten on the wheel. “I um, think I have something to tell you. But I’m—”
“Is everything okay?” Andrew interrupts, scanning his memory for any signs of additional distress Milo might have displayed in the last few months.
“Yeah. Well. I mean, um… whatever. But I—”
“What? You’re worrying me.”
Milo sighs and pulls into the parking lot of a restaurant with a giant crab on the roof. “I can’t do this and drive.”
“Okay,” Andrew says slowly, then unbuckles his belt and turns to face him. Milo’s face is a little drawn.
“So, I think I might be gay,” Milo blurts. “I mean, I know. I know I am.”
There’s a full minute of silence in the car while Andrew tries to work the words out. Static screeches in his ears, fleetingly numbing his reaction. Focus. He has a few seconds to control his face, to tamp down that sprout of irrational hope seeding despite the chaos, and be ultimately supportive.
“Um.” Andrew licks his lips and tries to pull himself together. That seedling wants to grow into something bigger, and he can’t let it. He looks at Milo’s face, which has morphed into something more vulnerable and worried. Hope is a hollow bell in his chest, ringing loud and dissonant; he wants to vibrate out of his skin with the inappropriateness of his own reactions. This is about Milo, not him. “You aren’t worried that I’m mad or something, are you?” he manages to say.
“I don’t know. Um, your face is doing... a thing,” Milo replies.
Reflexively Andrew puts his hands to his cheeks. His fingers are cold. Okay, so he definitely doesn’t have his face under control. “No, I... wasn’t expecting it, that’s all.” Andrew’s brain, sometimes faster than his mouth, is careening backward. “Maybe I should have had a clue.”
“Oh?”
“Well, for starters, you kissed me back.”

Today I’m very lucky to be interviewing Jude Sierra author of What it Takes
Hi Jude, thank you for agreeing to this interview. Tell us a little about yourself, your background, and your current book.

1)      Do you have pictures that you use for your characters? Can you share them with us?
Absolutely! I love to troll pintrest for pictures of all kinds of things, and beautiful men who have characteristics matching my characters is particularly lovely! Here we have two of Milo(ish) guys. The first is more what he looks like as an adult. The second is more him in the freckles and youth. His hair is a darker red and his eyes are a deep blue. Andrew is very similar to the third here, only much more tan. 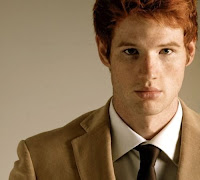 2)     What kind of book would you like to write that people would see as a huge departure for you?
Well honestly, I think that Hush might be seen as that going forward. I had never written paranormal and there was a lot of stuff in there that was foreign to me. It was a great adventure! But looking at my past fiction and the books I am writing/thinking about in the future, Hush definitely stands out to me. In a no holds barred world I might actually finish and put together this weird dystopian alternate world poly-romance thing I worked on for a NaNo years ago.

3)     Have you ever killed a character? Was it traumatic for you? If you haven’t killed one, would you ever consider it?
I killed a character everyone is going to hate, so it wasn’t painful at all! Good riddance to that guy. I don’t think I’d ever kill a main character. I need straight up HEA or I cry too much.

4)     Favorite location you’ve ever written about?
I enjoyed the Cape a lot! Partly because some of the scene description was pulled from my own beautiful experiences in Wellfleet when I went for a poetry retreat a few years ago, but also because I am very grounded by large bodies of water, particularly the ocean. It was wonderful to get to put characters by the ocean.

5)     What’s your favorite season and favorite activity for that season?
Winter! I love snow. I love the hush of heavy snow fall when the world seems to hold still for just a moment. I love Christmas lights and decorating the house. I love making hot chocolate for my boys when they come in from playing outside and I love snuggling under a blanket with a book.
Well honestly, I think that Hush might be seen as that going forward. I had never written paranormal and there was a lot of stuff in there that was foreign to me. It was a great

Jude Sierra began her writing career at the age of eight when she immortalized her summer vacation with ten entries in a row that read "pool+tv." She first began writing poetry as a child in her home country of Brazil, and is still a student of the form.

As a sucker for happy endings and well-written emotional arcs and characters, Jude is an unapologetic bookaholic. She finds bookstores and libraries unbearably sexy and, to her husband's dismay, is attempting to create her own in their living room. She is a writer of many things that hope to find their way out of the sanctuary of her hard drive and many that have found a home in the fanfiction community.

She is currently working on her Master of Arts in Writing and Rhetoric and managing a home filled with her husband, two young sons, and two cats. Her first novel, Hush, was published in 2015 by Interlude Press.

What It Takes will be published by Interlude Press on January 14, 2016. Connect with author Jude Sierra at JudeSierra.com, on Twitter @JudeSierra, on Goodreads at goodreads.com/Jude_Sierra, and on Facebook at facebook.com/JudeMSierra. 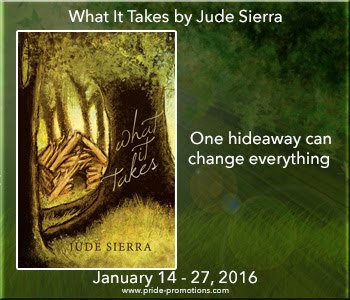