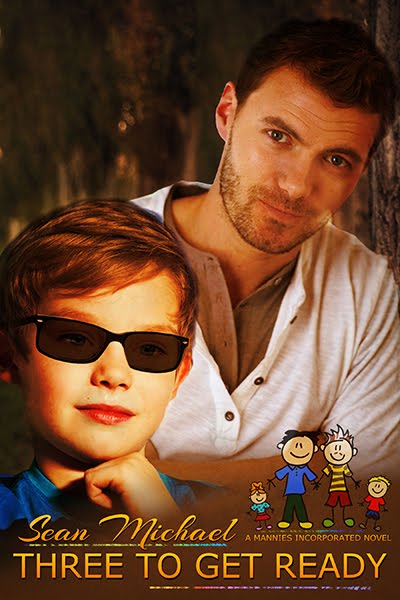 Single father Jack Jones is in dire need of a new nanny. His five year old son Nathan is legally blind, he has twin baby girls arriving in less than two months and the girl currently working for him is leaving at Thanksgiving to go home and continue her higher education. If Mannies Incorporated doesn’t come up with a viable candidate soon, he’s not sure what he’s going to do.

Dan Miller is on the hunt for a new job. He’s had some great placements with Mannies Incorporated, many as Manny to multiple birth families to get them over the hump. He even has experience with special needs children, so the job he’s interviewing for looks like it’s right up his alley.

When Dan arrives at Jack’s house, he discovers that this Jack Jones is his Jack Jones, the man he was in love with during college, and who broke up with Dan because Dan wanted children. Will Dan and Jack be able to put the past behind them and work together, or will their past keep them from having a future together?

Dan Miller followed the instructions on his GPS to one Jack Jones' house for his interview. He was trying to decide if it was a good or bad omen that he'd dated a Jack Jones. It had ended, so maybe bad. On the other hand, they'd ended because Jack didn't want kids and he did, which was better to learn early on, before they'd invested a lot of time in each other, right? So good sign.
Chuckling at himself, he went over what Drake at Mannies Inc had told him about the family.
Single gay dad, one special needs son - the boy was nearly six and clinically blind. Apparently he could see general shapes if they were high contrast and he could see lights and light contrast. There were twin girls on their way. In a couple of weeks in a few weeks in fact.
Newborns were Dan's favorite. He loved that new baby smell. He loved their chubby little cheeks and limbs, their fat bellies and how quickly they changed.
After reading the file, he'd had to agree with Drake that he seemed like a really good fit for the family.
The position was live-in, so he paid close attention as the condo came into view. Not far from the beach, it was a decent size, not too big, but not tiny. The front was neat and he could see the backyard was fenced in.
Pulling into the drive, he turned off the engine and took a deep breath. Okay. Interview time. He climbed out of the car, with his best ‘I’m the perfect man to look after your kids’ face on.
He knocked on the front door.
"Daddy! Maddie, someone is here!"
"I'll get it, man. Hopefully this one will work for your daddy, Mr. Picky. I have to leave the week of Thanksgiving. I have to."
The door opened and a lovely dark-skinned young woman stood there with a skinny little boy in thick glasses. "Hey there. Can I help you?"
"Hi, Dan Miller. I'm here to see Mr. Jones?"
"Sure. Come on in. I'm Maddie, Nathan's personal assistant." She winked at him.
"Very nice to meet you." He shook her hand.
Then he turned his attention to the little boy. "Hey there, You must be Nathan."
"Uh-huh. Nathan James Jones." One hand was held out. "Pleased meeting you."
Dan took Nathan's hand and shook it solemnly. "Pleased to meet you, too."
"Hey there. Sorry, man. I was paying some bills. Crazy life."
Dan looked up at the familiar voice and blinked. Strong jaw, blond curls, and the bluest eyes in the history of the earth -- that was Jack. His Jack.
Dan felt like he'd been poleaxed.
His Jack who didn't want kids, no way no how was he fucking crazy for even suggesting it.
"Jack?" Oh, smooth, Dan. Clearly it was Jack. Hell, even if he couldn't believe his eyes, the folder he'd gotten from Drake had said the guy's name was Jack.
"Dan? Danny? Oh, my God!" Jack's eyes went wide. "Look at you. You look amazing."
He kind of hated the way Jack's words made him stand a little taller, a little straighter. "So do you. The years have been good to you." Twelve years. Shit, things had changed in that time, that much was obvious, but not how just a glance from those devastating eyes could make his cock perk up. That hadn’t changed a damn bit.

Thank you for helping me to celebrate the release of Three to Get Ready, a Mannies Incorporated novel.

I make no bones about the fact that winter is my favorite season. I love Christmas. I love the cold. I love the snow. I don’t really like the super low temps we can sometimes get, but I like them far more than the hot and humid temps of mid-summer.

I’ve always theorized that because I was born in January – ie was a winter baby – I love the winter. Oh yes, another reason to enjoy the season – my birthday is in it ;)

I’m glad my birthday is in the winter, but even more glad it isn’t too close to Christmas. I’ve always felt that was a rip-off, to have your birthday during the holiday season. One or the other is going to get a raw deal, plus all your big stuff with presents happens at once.

In Three to Get Ready, the twins are born just before Christmas and Jack and Dan know that it’s important to make sure Nathan doesn’t feel like Christmas was overtaken by the twins being born and in later years by their birthday. It’ll be a juggling point, but I’m sure they’ll manage to find a happy medium for everyone.

Thank you to everyone who has picked up the book so far and to everyone who is considering it. The Mannies Incorporated novels are a great deal of fun to write and having one release is one of my favorite new winter traditions.

Often referred to as "Space Cowboy" and "Gangsta of Love" while still striving for the moniker of "Maurice," Sean Michael spends his days surfing, smutting, organizing his immense gourd collection and fantasizing about one day retiring on a small secluded island peopled entirely by horseshoe crabs. While collecting vast amounts of vintage gay pulp novels and mood rings, Sean whiles away the hours between dropping the f-bomb and pursuing the kama sutra by channeling the long lost spirit of John Wayne and singing along with the soundtrack to "Chicago."

A long-time writer of complicated haiku, currently Sean is attempting to learn the advanced arts of plate spinning and soap carving sex toys.

Barring any of that? He'll stick with writing his stories, thanks, and rubbing pretty bodies together to see if they spark. 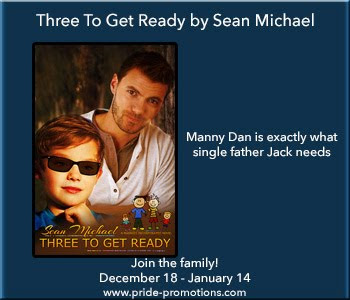 Rafflecopter Prize: E-copy of ‘Three To Get Ready’ by Sean Michael