Acts of Passion by Sedonia Guillone - Blog Tour with Giveaway 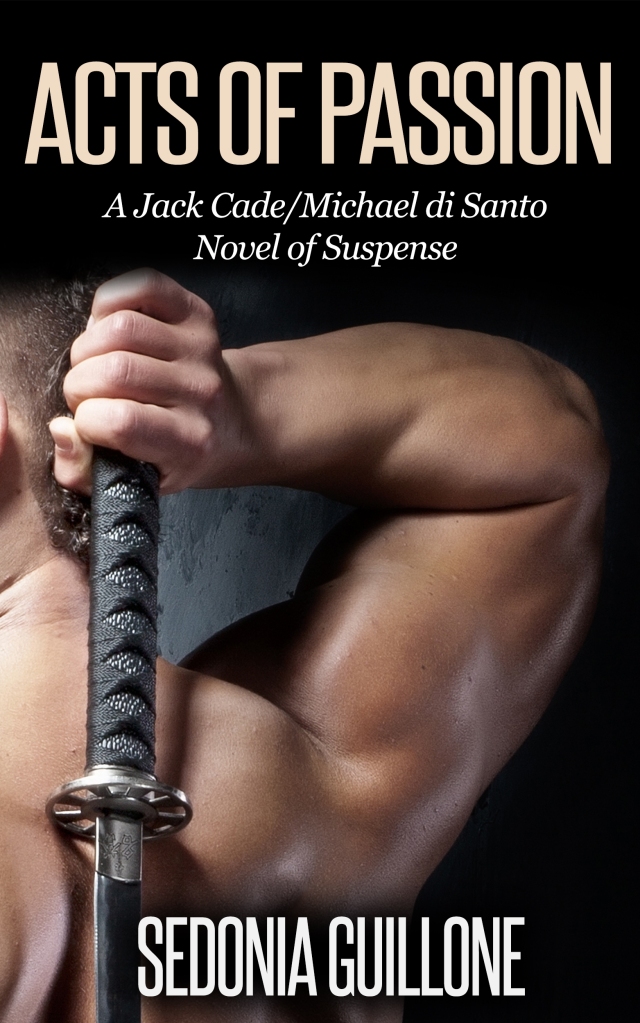 BLURB: When a man is found in his apartment, appearing to have committed hara kiri with a samurai sword, Boston Homicide Detective Jack Cade suspects more is going on than what it appears. The department’s criminal profiler has left and a new guy is taking his place. At first, Cade is skeptical of Dr. Michael Di Santo. Di Santo seems so absent-minded and too neurotic to be effective. But he is brilliant and hot and Cade finds himself falling hard and fast, both in lust and in love. The attraction is mutual, although Michael's past demons haunt him, keeping him from getting too close. Together, they begin to unravel Michael's emotional knots even as they close in on a killer, another brilliant, wily person whose sights are now set on Michael.

Studying the front area of the building, he wandered down the flower box lined stone walk of the apartment building and turned to face it. Crime lab workers and patrol officers moved around on either side of the yellow crime tape, keeping the building cordoned off until Jack gave instructions to clear out and retain only the apartment as the crime scene.

Jack stepped aside to let someone go past him and bump! Smacked into something.

He turned. “Excuse me, I’m—” Or rather, he’d bumped into someone.

The man was adjusting the glasses Jack had apparently knocked off his face. “You’re in a crime scene,” Jack said.

“Yes, I know.” Almond-shaped brown eyes seemed to study Jack from behind round lenses. He looked Asian, yet sort of…not Asian at the same time. His dark brown hair was styled in a conventional way, parted on the side in short layers. The crumpled navy suit he wore, complete with diagonally striped tie against a light blue dress shirt made him appear as if his mother had dressed him for a spelling bee at school even though he was probably about Jack’s age. Forty.

Jack blinked. He was taking absolutely too long to find out who this man was. Then light dawned. Of course. “Dr. Di Santo?”

“That’s me. Hope I didn’t break your glasses.”

Di Santo touched them on each side as if to check. “No, they’re fine.”

Jack watched the man’s hands as he gingerly adjusted the frames. Nicely shaped fingers. Clean, trimmed nails. “Sorry I bumped you that way.”

“No problem.” Di Santo cleared his throat. “I hope I can be of help to you.”

Jack started. “Me too. This way.” He led Di Santo into the building and up to the apartment. “As I told you on the phone, I’m not so sure this was a suicide.” He let Di Santo precede him into the apartment and followed him, observing the way the slim man took in the surroundings on his way over to the victim.

Jack explained his suspicions and then let the man work. For what seemed a long time, Di Santo wandered about then stood in the center of the room, his gaze on the coffee table. His hand disappeared into his jacket pocket and pulled something out, which he popped into his mouth.

Jack watched him. Watched the man’s cheek bulge on the side while he sucked on whatever it was in his mouth, his gaze intent on the coffee table and victim. He then approached Jack and Jack heard the click of hard candy against the guy’s teeth. Finally Di Santo turned and knelt by the body.

Jack saw the professor’s eyes widen, especially on the hilt of the knife. “What is it?”

Di Santo seemed to ignore his question, staring at the knife. “Were his hands on the hilt of the knife or over his face when you found him?”

“Okay. Please open the robe so I can see the wound,” he said to Murphy.

Murphy did as he asked and Di Santo gazed for what seemed five straight minutes at the vicious cross-shaped cut in the centre of the wound.

“Jumonji giri,” he said, nearly in a whisper.

“What?” Jack looked between the knife wound and Di Santo.

The hot-yet-nerdy man was still staring down, seeming to ignore him. The candy in his mouth clicked several times against his teeth.

Michael Di Santo looked up, his eyes seemingly far away yet intent at the same time. “What kind of movies did this man watch?”

Behind the Book: The inspiration for Michael Di Santo

When I first came up with the character of Michael Di Santo in His Beautiful Samurai, he was not an active character in the book but someone in Detective Toshi Genjin’s memory. Michael was Toshi’s first serious love affair when Toshi attended U Cal, Berkley back in the ‘80s. If you’ve read His Beautiful Samurai, then you’ve briefly met Michael when he calls Toshi’s cell phone and he gives Toshi some food for thought as to profiling the Ronin Killer. Michael is a tragic figure. A dark cloud has followed him since he was a little boy and his younger brother was abducted and went missing. Tormented by a potent combination of guilt and of not having resolved his feelings for Toshi.

Michael was inspired by the character of crack profiler Dr. Tony Hill from BBC’s gritty murder mystery series Wire in the Blood. A genius at profiling would be killers, Tony is at the same time quirky and socially awkward. Whenever he is romantically interested in someone, things end up going badly. When I started Acts of Passion, I had an image of a guy much like Tony Hill, only he looks like model and actor Daniel Henney and this time, he had the hope of working through some of his issues in order to find true love (in the form of Boston Homicide detective Jack Cade – picture Chris Hemsworth here)

No spoilers in the tidbits about Michael here, but in spite of his social awkwardness and inner torment, he too is a genius profiler, deeply inspired by Dr. James Brussel the psychiatrist who basically pioneered the practice of criminal profiling when he helped to catch such known criminals as the Mad Bomber and the Boston Strangler. Michael is also a deeply compassionate guy, as you will see in the book. He adores his cat, Chie, whom he rescued and adopted when she was a stray who attached herself to him. He is also a vegetarian, unable to bear the thought of eating animals who suffered being raised for the slaughter.

When the story opens, Michael has already used his profiling skills to find the person who’d abducted his younger brother. His soul wouldn’t let him rest until he did that. I find Michael’s character fascinating and I have often reflected on the possibility of writing a separate story portraying this incredible search that not only finds a killer but helps him heal in a way that will enable him…we hope…to find his HEA with Jack Cade. I hope you will enjoy Acts of Passion and join Michael on his journey to finding a serial killer in addition to the man he can love. The only problem is, the serial killer sets his sights on Michael. A killer whose brilliance matches Michael’s and whose determination to get what he wants could end Michael’s chance when it has barely begun…

Sedonia welcomes comments from readers. You can find her website and email address on her author bio page at www.sedoniaguillone.com.