Second To None by Felice Stevens - Release Day Blitz with Giveaway 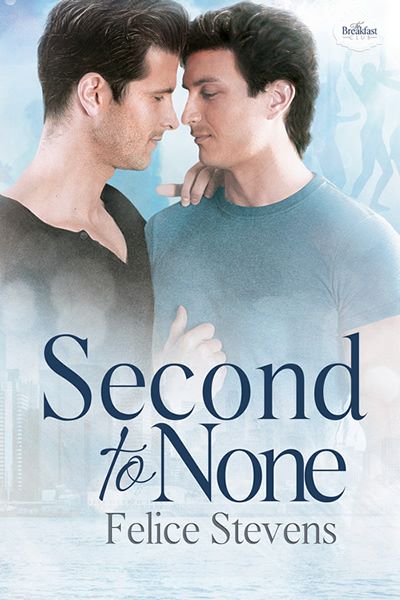 Nightclub owner Marcus Feldman never met a man he didn’t love, at least for the night. Although his best friends have all found love, Marcus shuns their advice to commit to one man and settle down. His past has taught him monogamy and marriage is for fools, and Marcus is anything but a fool.

Tyler Reiss’s dream of dancing professionally is unexpectedly cut short and replaced by a different kind of love. He trades in his ballet slippers for go go boots, and spends his nights dancing at the hottest gay club in the city. Flirting with the customers for tips is easy, but resisting the dark and sexy Marcus is becoming harder to do with each passing day.

Unforeseen circumstances bring Marcus and Tyler closer and though they give in to their mutual passion, both still struggle to guard their hearts. When crises threaten, Tyler and Marcus find their strength in each other rather than falling apart. Tyler must choose to either run, or stay and fight for the life he wants, while Marcus realizes that love doesn’t mean losing himself and opens his heart, making him a better man in the end.

His eyelids fluttered open to the sight of a hospital room instead of his bedroom. His neck hurt and his legs were contorted in a pretzel-like position. He untangled himself from the chair he’d fallen asleep in after they moved Tyler to a room last night around three a.m., and walked over to the hospital bed where Tyler lay wide-awake.

Tyler stared up at him, confusion apparent in his furrowed brow, but Marcus noticed his bright, pain-free eyes.

“Like someone punched my guts in.” He licked his lips. “Is there any water? I’m really thirsty.”

Marcus took the plastic cup from the swing table next to the bed and poured Tyler a small glass. “Let me raise the bed for you so you don’t spill it.” Tyler nodded and Marcus pressed the button and watched the head of the bed raise up a few inches before stopping. “Here. Drink it slow.”

Tyler gave him a searching look but said nothing and drank his water. His head fell back on the pillow, and he closed his eyes.

“What are you doing here?”

Marcus consulted his watch. “It’s seven a.m. The doctor said last night when they brought you into the room here that if you didn’t show any signs of a concussion, they’d spring you out sometime this morning.”

“Okay. But that doesn’t answer my question about what you’re doing here.”

“I stayed to make sure you were okay, plus I’m taking you home when you’re discharged.”
“I can call a cab.” Tyler winced as he sat up. “I’m fine, and it doesn’t hurt nearly as bad as it did yesterday.” His fingers touched his side. “They have me taped up pretty well.”

“Let me see.” Before Tyler responded, Marcus placed his hand over Tyler’s rib cage and felt the bulky bandage through the thin fabric of the hospital gown. He slid his hand around Tyler’s waist.

“Stop what?” He might be far from innocent, but he could play the part.

“Oh, am I interrupting?” A nurse walked in with a tray and a thermometer. “I’m sorry, but I have to give him his meds and take his BP and temperature.”

“I hope you’re taking it rectally. I was always told it gave the most accurate reading. Is that true?” He stepped away from the bed and winked at the nurse, who broke out in laughter.
“Marcus, shut up,” said Tyler, not even trying to hide the exasperation in his voice.

“Oh Marcus, you’re silly.” She bit her lips to stop her amusement. “Don’t worry, Mr. Reiss. Your boyfriend is right, but we take it by the eardrum method. It’s very accurate as well.” She busied herself, unaware of Tyler’s glare. “Just relax now.”

After finishing, she pulled away the blood pressure machine and smiled. “Very good. All your vitals are excellent. How’s your head?”

“Hard as a rock,” Marcus spoke before Tyler could answer.

“Oh, you’re a kidder.” She patted him on his arm. “I think it’s sweet the way you stayed here all night to make sure everything was okay. And now you get to take him home and baby him.”

Watching Tyler grow angrier by the minute was a better show than anything he’d ever watched on television. “I’m looking forward to it. I may have to borrow a nurse outfit.”

The nurse’s laughter followed her out the door, but Tyler was having none of it. Seeing the hostility in his blue-gray eyes, Marcus girded himself.


“What the hell are you talking about? I’m not going home with you.”