To One Hundred by Melissa Blue - Release Day Blitz with Giveaway

When they met online they were equals...Then she walks into his classroom.
For four months Eva March shared almost every secret with a handsome stranger. It was easy when she didn't have to meet his gaze in real life. The online flirtation was fun. She could be a strong, put-together woman without a sordid past. Most importantly, he'd never know the truth.

Grady Addison takes his job as a professor seriously. He doesn't sleep with co-eds, much less his students. Eva doesn't even fit his leggy, peppy blonde requirements, but he can't walk away now. He's spent too much time fantasizing about her, her smile and the way her eyes darken when she thinks of her past.

And her past is a problem. The secrets she hasn't yet told him could end his career and for Eva, her life could just come crashing down...again. 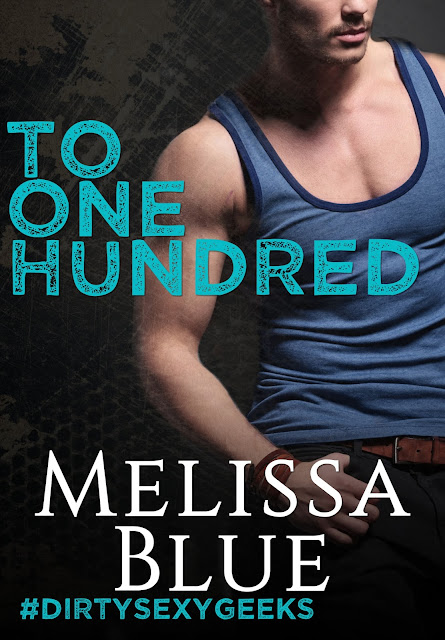 “ If you are not into Geeks, after reading 'To One Hundred' you will be a Geek lover for sure. You will discover Geeks make great lovers. Waiting for the next one in this series!!!”-Goodreads Reviewer

“This was an interesting story! I am not a “geek” and I don’t know anything about the “geek”world, so this was sort of an inside look into the “geek world”-The Smutbrarians

“This book was fun and super hot!! I can’t wait to see what else comes from this series, since it seems to focus on the 4 main men in the book! I’ll definitely be buying the next in the series!!” -Alpha Book Club

One night, they could have one night where the complications didn't matter. Right? Didn't mean there would be more. For months she'd wanted to know Grady, in the flesh. Would they still spark, laugh and have an easy comfort between them? The consequences seemed so far away when she couched their circumstances in that light.
Maybe the inner debate was all lies to appease her conscience, but Eva grabbed her purse and followed him out of the coffee shop.
He revved his bike's engine when she stepped out onto the sidewalk. She shook her head and walked over to him. “Let's just announce to the world I'm leaving with you.”
Grady's eyes were still guarded but he smirked. “Didn't think you'd see me.”
He'd parked right outside the shop. She couldn't have missed him. “Where are we going?”
His hands tightened against the bar handles. “To meet my brother Wade.”
Her heart shot into her throat. “What?”
His smirk somehow deepened. “You want the truth about him. I'll let him tell you.”
She stuffed her hands into the back pockets of her shorts, trying to appear relaxed even though a storm of butterflies fluttered in her stomach. “What exactly will that do?”
The smirk dropped away from his lopsided smile. “It'll get you on my bike, your arms and legs wrapped around me. Outside of that, we'll play it by ear.”
All he needed was a James Dean leather jacket to perfect the bad boy statement. Then again, maybe not. He was lethal enough without one. “So you're done being the kind, understanding nice guy?”
His smile transformed into a grin that promised a multitude of wicked things. Yeah. No jacket necessary. “You have to admit, it was wearing thin.”
Grady offered her the helmet. Taking it spelled trouble in all languages. Jumping on a motorcycle with a guy who wore a smile that had no good intentions behind it...Yeah. But the facts were different with him. He wasn't just her professor. He didn't prey on her vulnerabilities. And most importantly, he hadn't made her feel broken once.
Eva took the helmet, fastened it and then climbed onto the back of the bike. She wrapped her arms around his chest. One could say she copped a feel as she ran her hands over his stomach. The soft cotton shirt hid taut muscles, but now she could feel every ridge. His stomach jerked beneath her hands.
“Eva?” he asked, his voice low and tight.
She leaned forward until her mouth was at his neck. “Yeah?”
He revved the engine again. “You might want to hold on really tight.”
She locked her fingers together. “I know.” 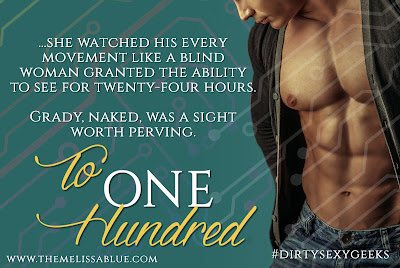 Melissa Blue’s writing career started on a typewriter one month after her son was born. This would have been an idyllic situation for a writer if it had been 1985, not 2004. Eventually she upgraded to a computer. She’s still typing away on the same computer, making imaginary people fall in love. 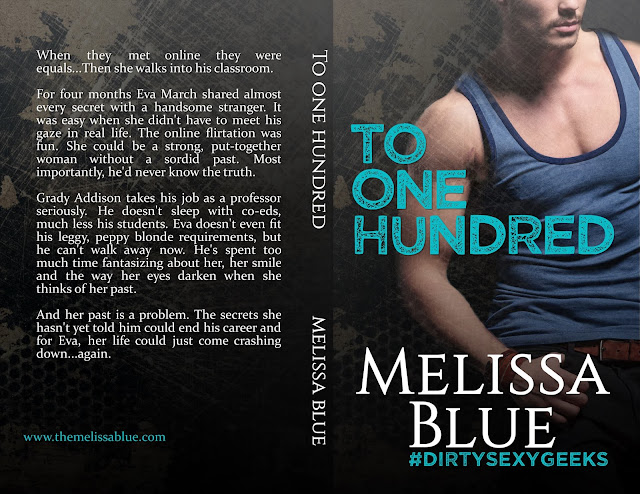