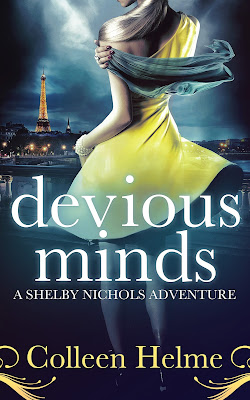 Blurb:
It’s been almost a year since a near-fatal gunshot wound left Shelby Nichols with the ability to read minds. In that time she’s faced one problem after another. She’s been shot at, framed for murder, and targeted by a serial killer, just to name a few. Now she’s trying to help her lawyer husband win a murder trial that will enable him to become a partner in his law firm. Sounds easy, right? But nothing ever goes as planned when it comes to Shelby Nichols.

When special agent, Blake Beauchaine, shows up to collect a debt from Shelby, things get even more complicated, and Shelby is soon on her way to Paris. A routine meeting with a rogue agent reveals a sinister plot, putting Shelby into the cross-hairs of a known terrorist. Even worse, she doesn’t speak French, so it seems her mind-reading abilities won’t help her this time.

Things go from bad to downright dangerous for Shelby, especially since her usual guardians, Uncle Joey, and his hit-man, Ramos, are back in the states. Lost and on her own in the streets of Paris, can Shelby escape the cold-blooded killer in time to stop his devious plans, or will this be the end of the line for Shelby Nichols?

My mouth watered at the thought of chocolate, and I eagerly followed him into another maze of buildings and cobbled streets. We passed a few outdoor cafés before Blake stopped at the one he wanted. We sat outside, even though it wasn’t real warm, and ordered lunch. My order of a buckwheat galette filled with ham, cheese, tomatoes and mushrooms seemed to melt in my mouth.

After finishing up and, after a quick restroom break, we left for the chocolate store. On the way, we passed the real, honest-to-goodness, Louis Vuitton shop. I swallowed and glanced inside at all those expensive and non-knock-off handbags. Blake slowed down and studied me. He was thinking I had that glazed look of a woman just about to spend more money on a purse than it was worth.

That settled me down some, and I snapped my mouth shut. Letting out a breath, I caught up with him. He shook his head at me, and I only looked back once before we continued on. Several twists and turns later, we came upon another shop with a sign above it that read “Henri Le Roux Chocolatier et Caramélier.”

I understood the chocolatier part pretty fast and eagerly stepped inside. All the chocolates were displayed behind the glass case just like jewelry in a jewelry store, and I took my time looking at them all. A young woman came out to help us, and Blake spoke to her in French, so I didn’t know what they said. She got out a box and wrapped it up, then handed it to him.

“For you madam?” she asked.

“Ah... I have just the thing.” She left and came back with a circular shaped plastic container with lots of square chocolates inside. “These are chocolate outside, and inside is a tender cocoa marshmallow heart. You will love it.”

While Blake paid for the chocolates, I couldn’t wait to try a piece and opened the container. I pulled out a square and carefully placed it on my tongue, then closed my mouth around it. As the chocolate flavor burst along my taste buds, I tried not to moan, but I did anyway. Next came the sweet marshmallow center, which sort of melted in my mouth. It was the most perfect chocolate-covered marshmallow I’d ever tasted in my life.

“Come on, Shelby.” Blake steered me out of the shop and checked his watch. “We have just enough time to see the Eiffel Tower, but we’ll have to take the metro. There’s a station this way.”

I followed him in a daze. I didn’t know if it was the jet lag finally catching up, or the excitement of being in Paris, or all of that chocolatey goodness. I only knew that if magic existed, this was how it felt. We came to a stairway with a railing around it and a metro sign posted above. Several kiosks lined the wall at the bottom of the stairs. Blake inserted his credit card into a kiosk and tapped on the screen until several tickets came out. He handed me half of them.

“Keep these for later.”

How did you get started in the consulting business?

It all began the day I stopped for carrots at the grocery store. As I was checking out, a loud boom echoed from the bank inside the store. I glanced up to find a man clutching his chest and grabbing the mask off another man’s face. I got a good look at the guy’s unmasked face, and this time, he shot at me.

Next thing I know, I’m lying on the floor with a major headache. Luckily, the bullet only grazed my scalp, but the life-changing part came later, when I realized I could hear people’s thoughts. You can imagine how horrified I was to hear what people were thinking, especially what they really thought of me. I hoped it would go away, but so far I’m still stuck with the mind-reading thing.

I kind of got into trouble after that, since I had to stop a woman from chasing after my husband, and her uncle turned out to be the local mob-boss. I had to tell Uncle Joey my secret to stay alive, so now I help Uncle Joey out on a regular basis. Over the course of our association, I’ve been in some risky situations. Sometimes, I even wonder how I’m still alive, but at least we’ve reached an understanding that mostly works.

That’s when I started my own consulting agency. I mean, why have a super-power if you can’t use it? Of course, I try to keep it a secret that I can read minds. I usually tell people I have ‘premonitions’ to be on the safe side. I’ve helped a lot of people with their problems, including the police, with fabulous results.

How do you balance working for both a mob-boss and the police?

That’s where it gets complicated. So far, the police only know I’ve helped Uncle Joey through my consulting agency, so I’ve managed to keep it under the radar. But Uncle Joey hates that I work for the police, although I have found out a few things that have been helpful to him. Besides all that, my husband, Chris, has requested my help with a murder trial, and I owe one of Uncle Joey’s acquaintances, who happens to be a federal agent, a favor. See what I mean about complicated? And it’s all because I went grocery shopping for some carrots.

What do you do in your downtime?

I don’t have a lot of downtime since I’m married and have two children, but when I get a moment to myself, I love to read, or take a bubble-bath. My favorite TV show is CASTLE, so I like to watch that. I also had to learn how to play poker once for Uncle Joey, and I really enjoy playing that game, especially since with my mind-reading ability, I always win!

What was your most perplexing case?

That would have to be a cold case a young woman asked me to solve. It involved her mother who had disappeared six years earlier. It was hard to dig up anything that had happened that long ago, but with the help of a retired detective, and my mind-reading, I managed to figure it out...although I nearly died. But it was worth it to solve the case and tell the young woman what had happened to her mom. 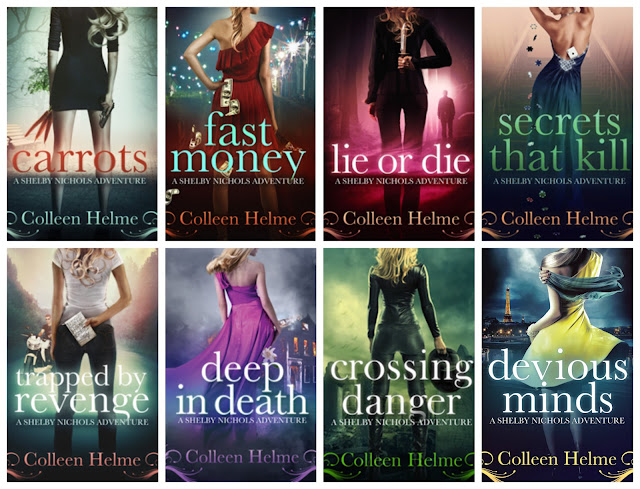 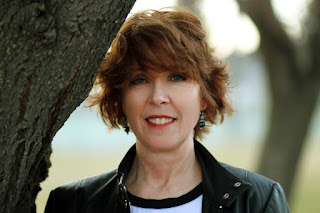 As the author of the Shelby Nichols Adventure Series, Colleen is often asked if Shelby Nichols is her alter-ego. “Definitely,” she says. “Shelby is the epitome of everything I wish I dared to be.” Known for her laugh since she was a kid, Colleen has always tried to find the humor in every situation and continues to enjoy writing about Shelby’s adventures. “I love getting Shelby into trouble… I just don’t always know how to get her out of it!” Colleen lives in the Rocky Mountains with her family. Besides writing, she loves a good book, biking, hiking, and playing board and card games with family and friends. She loves to connect with readers and admits that fans of the series keep her writing.

You can find Colleen at