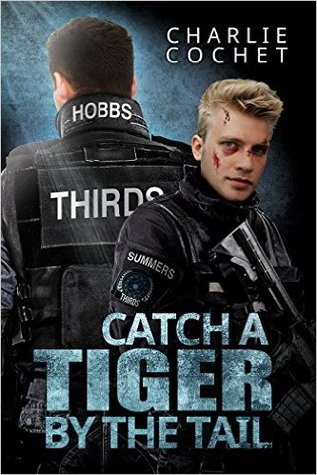 Calvin Summers and Ethan Hobbs have been best friends since childhood, but somewhere along the line, their friendship evolved into something more. With the Therian Youth Center bombing, Calvin realizes just how short life can be and no longer keeps his feelings for his best friend a secret. Unfortunately, change is difficult for Ethan; most days he does well to deal with his Selective Mutism and Social Anxiety. Calvin’s confession adds a new struggle for Ethan, one he fears might cost him the friendship that’s been his whole world for as long as he can remember.

As partners and Defense Agents at the THIRDS, being on Destructive Delta is tough at the best of times, but between call-outs and life-threatening situations, Calvin and Ethan not only face traversing the challenges of their job, but also working toward a future as more than friends.

5 out of 5 stars
Hi, my name is Chris.. *waves* And I'm addicted to the THIRDS series. *wipes brow* Ahhh I feel so much better now after saying that. ;) Now onto the important stuff such as this is book 6 in a very connected series. I don't suggest reading this one without having read the previous books in the series. You'll be lost..and we'll have to send out the Therian Search & Rescue squad to find you. While that might sound awesome, it really really does, imagine broody Brodie coming to get you after you disturbed his Dex smexy times. Not. A. Happy. Brodie. Catch a Tiger by the Tail is Ethan Hobbs and Calvin Summers story from start to finish. There is interaction with their teammates, friends and families but ultimately this is Cobbs' story. While I'd love to share plot with you, it's a really awesome plot too, there are a lot of what I'd consider giveaway or spoiler points. I can tell you that this book is full of feels, many, many feels. It's also filled with a lot of stop and re-read that passage moments, and sweet moments, and hot, sexytime moments. Of course it also has some laugh out loud moments.. Cael and Dex's coffee!! The tone of this book overall is a little more somber as it shows how much Ethan struggles with his mutism and social anxiety. It also focuses on how much he and Cal are each other's support network. While they have their families and friends, they depend on each other the most to help, heal, and comfort particularly when Ethan's at his worst. Catch a Tiger by the Tail sets up the continuing story arc going into the next book(s) with quite a few gasp worthy moments. Everything about this book was a win for me, from storyline, to the characters, to furthering the plot of the series. This book also gave an very unexpected boost to my love of Ethan and Calvin, ALMOST pushing them to favorite couple status over Dex and Sloane. And I have serious, mad, mad love for Dex and Sloane... I can't say enough about this series, obviously I'm a very addicted THIRDS Nerd. I can only say in addition if you haven't read this series, you're missing out on one of the best ensemble cast of characters around. Otherwise.. THIRDS Nerds... you have got to read Catch A Tiger By The Tail!!