Gwen wanted to believe that her real first name – Guinevere – was nothing more than the byproduct of a father's obsession with the legends of Merlin, an obsession that had cost him his job and ultimately ruined both their lives.
Yet, when she encounters a monster in a dark alley bent on killing her and meets Lance, her movie-star gorgeous rescuer who explains the truth about them and who he is – Lancelot, from King Arthur's court – there's no way she can believe that he's just some insane man who claims to still be answering King Arthur’s battle cry after fifteen hundred years, especially when she meets the other knights and discovers she is being targeted by beasts sent to hunt them long ago by the evil witch, Morgan Le Fey.

Gwen is pulled into a battle for her life. But as the pieces in a complex plan put together by Merlin himself fall in place and Gwen with the knights pursues the source of Morgan's evil, she is soon afraid for much more than her life, for Lance wins her affection, and soon her heart. Is it a true love?Will Lancelot still fight for Guinevere? Will he pick up his sword as he did for hundreds of years, or will he realize that despite his vow, he didn’t really love Gwen but a medieval queen that had been dead for over a thousand years? 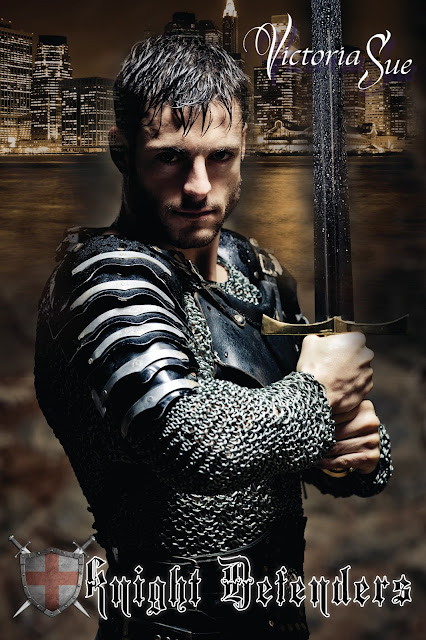 “Knight Defenders by Victoria Sue is a fun read, with humor, the unbelievable, one woman with sass and attitude, as well as a heart as big Texas and one brave knight who just may be falling for the right woman at the right time. Enjoy the magic, the action and the mystery of King Arthur’s men. Fun reading! Fast reading! The author, Victoria Sue has done a stand up job of blending myth, magic and mirth in a magnetic page turner!” ~ 5 Star Goodreads Review (Diane)

Knight Defenders - Excerpt
What the hell am I doing?
Gwen leaned her back on the door for a brief second as it clicked shut with such finality. Okay, so if she’d just let a serial rapist or murderer into her apartment, she’d be really annoyed. She swallowed her laughter, smiling at the irony.
She studied Lance silently for a few more seconds as he went straight to the window near the kitchenette. Of course, it gave a clear view of his car, so he would know she had been watching him. Gwen knew this whole thing was stupid and irresponsible, but right now she didn’t care. She’d been responsible far too long, and she knew she hadn’t just imagined what had attacked her in the alley. He owed her a big ass explanation.
Lance turned and studied her, equally silent. Gwen flushed a little at his calm, unhurried gaze. His eyes travelled from her cheap sneakers, up her too-fat, too-short legs, seemed to stop when they arrived at her breasts — stop a really long time, actually.
She tugged at her lemon shirt, trying to hide the coffee stains. He was probably wondering why she was such a mess. She couldn’t really explain how she helped Mr. Jennings hold his cup when the shakes got too bad, and there was always some spilt.
She wanted to fidget. She really should move, say something — say anything — but the gray eyes that had studied her so closely had now arrived at her face. Pinned her still. She’d always wondered where the stupid saying about deer and headlights came from. Now she knew; because she felt like she was about to get run over by a truck.
“Biscuits?” She cringed inwardly. God, could she never think of anything intelligent, even mildly entertaining to say? Here she was with this guy who looked like some Greek God, all six-feet-whatever of him, and instead of rushing over to wildly run her fingers through his gorgeous hair, she was blathering on about food.
Lance raised one imperial-looking eyebrow, and she felt the action in her knees as they wobbled.
“Biscuits?” He looked amused. “Not cookies?”
“Well, I think, umm no, actually I haven’t got any cookies. Watching my—” God, she nearly told him she was on a diet. As if he wasn’t already aware of her shape, she had to go and point it out.
“No,” he added, “I meant, you call them biscuits, not cookies.”
“Oh, I see.” She came to another stop. His lips were curling just a little. She could almost see the start of a smile. His head tilted slightly, questioning. Had he asked her something? God, focus. “My dad was English. Some of his words kinda stuck.”
“I’ve visited England. Lived there for a while,” Lance said casually.
“You must have lived there quite a while. You haven’t really got much of a New York accent.”
“Neither have you,” Lance countered.
“True. We’ve lived most everywhere. My dad moved extensively for work.” Yeah. Chasing the dream, or the next job anyway.
She gazed at his gray eyes again. He’d been moving all the time she’d been speaking and was suddenly very close. Too close. She couldn’t take a step back without hitting the door. Nerves fluttered in her belly. Nerves, and something else.
“We need to talk.”
God, it sounded like he was breaking up with her. What had they shared? A few sips of tea and almost a biscuit. Oh. Memory flooded in. She pushed her way from the door and sat on the small couch — the lumpy one that doubled as her bed when she pulled it out every night.
He turned and stalked back to the window. Gwen smiled. Stalked. Such a prissy word. Impossible to attribute to a Greek God. She eyed him warily again, glad he had his back to her, so she could stare, admire the thick hair that curled on his nape temptingly and take her fill of the wide, powerful shoulders encased in the leather coat he’d pulled her into earlier. It had smelled of musk. Smelled of him.
“So tell me, why do you go around fighting monsters in alleyways?”
He turned, and tilted his lips again. “I don’t just fight them in alleyways.”
Gwen sighed and rubbed her forehead. She could feel the headache starting. “I mean—”
“I know what you mean.” He looked at her, worry clouding his eyes. Hesitant.
“Can we just get this over with? I’m sure no explanation could be worse than me thinking I’m actually certifiable.”
“It’s a long story.”
Gwen looked at him and absently patted the couch. His eyebrows rose again. She grinned. Lance came towards the couch and very gingerly lowered himself. She didn’t blame him really; all the squeaking it made didn’t inspire confidence that it wasn’t going to collapse.
“So, you want to start at the beginning?” 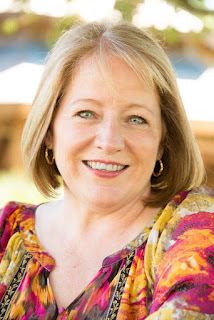 Has loved books for as long as she can remember. Books were always what pocket money went on and what usually Father Christmas brought. When she ran out of her kids' adventure stories, she would go raid her mom's. By the age of eight she was devouring classics like Little Women, and fell in love with love stories.She's still in love with them. Any size, any shape, any creature - love is love, no matter what it says on the box.In fact if they don't fit very neatly into any box she loves them even more! She has a very patient husband and three wonderful children. In 2010 in search of adventure they all moved from the UK to the US and are happily settled in Florida. Finally, after reading love stories for so long, she decided to write her own.