Save Of The Game by Avon Gale - Blog Tour with Author Interview, Review, and Giveaway 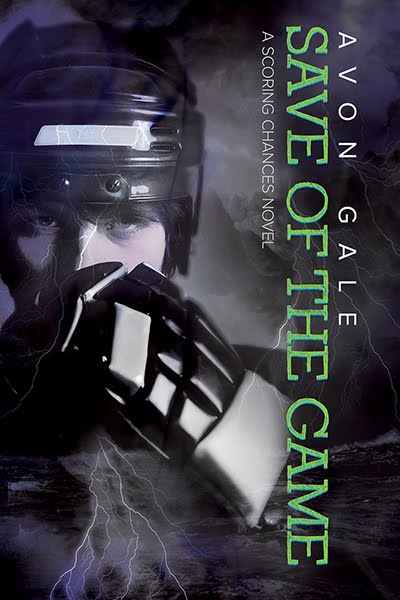 After last season’s heartbreaking loss to his hockey team’s archrival, Jacksonville Sea Storm goalie Riley Hunter is ready to let go of the past and focus on a winning season. His new roommate, Ethan Kennedy, is a loud New Yorker with a passion for social justice that matches his role as the team’s enforcer. The quieter Riley is attracted to Ethan and has no idea what to do about it.
Ethan has no hesitations. As fearless as his position demands, he rushes into things without much thought for the consequences. Though they eventually warm to their passionate new bond, it doesn’t come without complications. While trying to financially help Ethan, Riley must hide his family’s wealth so as not to hurt Ethan’s immense pride. For their relationship to work, Ethan will need to learn when to keep the gloves on and let someone help him—and Riley will have to learn it’s okay to let someone past his defenses.

His phone beeped, alerting him that he had a new text message. It was from Ethan Kennedy, the defenseman the Storm had acquired before the trade deadline last spring. The rowdy Kennedy, who had a heavy New York accent and was a huge fan of the New York Rangers—a team Riley hated, by virtue of being a New Jersey Devils fan—had bunked with him for a few weeks during the finals. He’d gone back to New York after the Storm lost in the playoffs. Riley hadn’t been sure if he was coming back or not, but the text message indicated he’d just gotten back to town, and would Riley mind picking him up from the airport?

And oh, he got a cheaper rate by flying into Tampa, which was three hours away. Was that a problem? And one last thing. Riley didn’t need a roommate by any chance. Did he?

Riley looked around his apartment, which was nice and clean and quiet. Just like it always was, except for those few weeks last spring when Ethan was there. He was loud and messy and always in Riley’s space, left half-full cans of Pepsi everywhere, drank whiskeys with dubious-sounding names, and smoked like a chimney.

be there in 3 hrs, Riley texted and grabbed a few boxes of coconut water out of his fridge. The idea of coming home alone after games reminded him of those car rides in Wyoming, and he was getting tired of the silence.


Save of the Game was about as perfect a hockey romance as you can get, well at least for this hockey addicted girl. This second book in Avon Gale's Scoring Chances series hit all the high notes that the first book hit. It also added a new couple, Riley and Ethan, that might have edged out my love for Jared and Lane. Just by a slide past the blue line of course. Riley and Ethan are two polar opposites in many ways. Ethan is family kind of guy, his mom and sisters mean the world to him. Riley is estranged from his family, having grown up wealthy they just weren't close to start. Ethan is a fly by the seat of your pants guy, where Riley is entrenched in his rituals and habits. Nothing makes this more apparent then during one game Ethan messes with Riley's pre-game ritual. Let me tell you that is NOT a pretty scene, poor Riley. I liked that the author didn't compromise and kept both Ethan and Riley as bisexual. Even though neither had been with another man, to them it was normal to be attracted to both men and women. It would have been very easy for her to label them as gay for each other vs open to a relationship with either. Even though neither were actually looking for a relationship when they kind of fell into one. I liked that aspect of the two of them, they didn't plan on a relationship but it found them. Ethan and Riley together are really kind of adorable, and sweet, yet sexy and hot. They brought out the best in each other and helped the other person be more. There is just so much win in this book that it's hard to not share all of the little moments that made this book, and this couple memorable. Needless to say Avon Gale has moved right onto my auto-buy list. I have to recommend this book because HOCKEY!!! but also for the well written story, and the fully developed characters that made Save of the Game a great book. You need to read this series, so run..don't walk..right to your nearest retailer to buy both books already out. I can't wait for the future books in this series!

Today I’m very lucky to be interviewing Avon Gale author of Save of the Game. Hi Avon, thank you for agreeing to this interview. Tell us a little about yourself, your background, and your current book.

1)      What is the most satisfying thing about being a writer?
Having someone tell me they liked my book or enjoyed my characters is never going to get old. Ever. It absolutely makes everything worth it!

2)     Do your characters ever take over your writing and make the story go somewhere you hadn’t originally planned?This happens in pretty much every book I ever write. It’s why I don’t even bother with an outline unless I get stuck. But it’s also why I have to edit my drafts about sixteen times! I’m definitely a “pantser” when it comes to writing.

3)     How did you celebrate the release of your book?
For this particular book, I celebrated when I sold it to Dreamspinner by getting a tattoo! It is a storm and a compass, with the words “follow some other storm” and “to the heart”. Both are lyrics from two of my favorite songs and symbolize always going where your heart is, no matter the obstacle.

4)     How did you come up with the idea for this book?
When I was writing Breakaway, I knew I wanted to write a book about Riley because goalies are my favorite! Ethan showed up and they seemed like they’d be the perfect match – the quiet, introspective goaltender and the loudmouthed, tattooed enforcer! I always love it in hockey games when enforcers stick up for their goaltenders, and it seemed like the perfect idea for a book.

5)     Have you ever written naked?Haha, friends joke that our house is “arctic house” , even in the summer, as we like to keep it on the cool side (and it’s old, so kind of drafty in the winter.) Definitely always dressed, and like now, with a space heater and a pair of fuzzy socks!

Avon Gale was once the mayor on Foursquare of Jazzercise and Lollicup, which should tell you all you need to know about her as a person. She likes road trips, rock concerts, drinking Kentucky bourbon and yelling at hockey. She’s a displaced southerner living in a liberal midwestern college town, and when she’s not writing you can find her at the salon, making her clients look and feel fabulous. She never gets tired of people and their stories -- either real or the ones she makes up in her head. 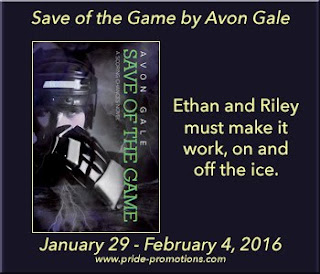 Rafflecopter Prize: 2 copies of ‘Save of the Game’ by Avon Gale