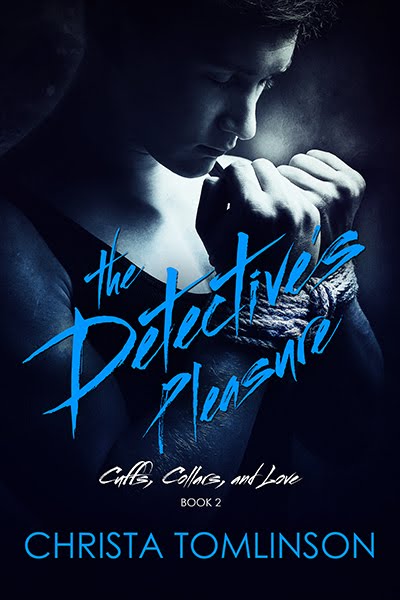 “You’ll kneel for me without me having to tell you to. And when you do, you’ll feel so much better. Trust me.”
- Detective Sam Roberts

Officer Ryan Bennett: Ambitious and smart, Ryan Bennett is a young officer on Houston’s police force. He’s pursuing his dream of being promoted to the city’s elite SWAT team with a single mindedness that won’t accept any outcome but success. But that isn’t his only dream. Ryan wants more than a coveted position on SWAT. He wants to be owned by a strong Dominant. To give himself up to a Dom who will make him shudder with pleasure beneath a firm yet loving hand. Unfortunately, Ryan has had nothing but failure in that part of his life. Now, he’s hidden that dream away from everyone, including himself. And he refuses to let anyone close enough to see what he truly desires, and who he truly is.

Detective Sam Roberts: Cool and calm, Detective Sam Roberts is good at reading people, during the day as a detective and at night as a Dom. He easily sees past the hard layer of arrogance surrounding Officer Ryan Bennett to the hurt submissive hiding beneath. He wants to help Ryan, even though the stubborn young man resists him. But Sam isn’t one to back down from a challenge. He’s determined to help Ryan embrace the soft, giving nature of his submissive side. Using both a gentle hand and the sting of the whip, he’ll work to coax Ryan’s submission free. But what will Sam do if he’s successful? Let Ryan go as promised? Or give the young officer the very thing he’s wanted for so long?

Ryan stopped picking at the wax and met Sam's eyes in the mirror. He didn't say anything. He just stood there, looking at Sam's reflection.
“Do you need-.” Sam stopped. Ryan was on the brink of ... something. Sam knew what he said would either finally get him to open up or cause that hard shell to close even tighter around him. Remembering Ryan’s seeming aversion to needing someone, he asked instead, “Would you like some help?”
Ryan moved his head, the movement so slight it could barely be called a nod. If they hadn't been staring at each other in the mirror, he would have missed it. Sam touched his fingertips to Ryan's shoulder, waiting to see if he would be rejected. Ryan didn’t react, so Sam moved in closer. When he laid the warmth of his palm across his back, Ryan closed his eyes and shuddered. He gripped the countertop with both hands, his head hanging low.
“I don't know how to let go,” he said in a voice hoarse with restrained despair.
Sam stepped forward again, moving close enough behind Ryan that he could wrap an arm around him. Ryan stood there for a second before he turned and leaned into his embrace. Sam looked at their reflection in the mirror. Ryan's blond head was nestled against him, streaks of wax down his back. For the first time he looked truly vulnerable, just as Sam had wanted to see him all along. He stroked Ryan's hair, pressing a kiss to the soft strands.
“I'll show you, Ryan. All you have to do is trust me. I'll take care of the rest.”

Today we're lucky to have Officer Ryan Bennett visiting with us for an interview.

1. What did you want to be when you were a kid?
I’ve always wanted to be a police officer. When I was little, playing with the other kids on whatever Army base we were stationed at, I always wanted to play cops instead of soldiers. I never grew out of it and I’m proud that I’ve managed to grow up and do what I’ve always loved.

2. What do you value the most in your friends?
Acceptance. I know that I’m not the most outgoing of guys. So I appreciate when the people I associate with the most understand that, and just let me be who I am.

3. What is your favorite song?
Ummm… recently it became Save A Horse, Ride A Cowboy. But you’ll have to read my story to find out why.

4. If you could change one thing about yourself, what would it be?
My impatience. Sometimes it leads me to make rash decisions.

5. What word or phrase do you overuse?
That I don’t need anyone. I’m trying to stop saying and thinking that.

Although Christa graduated from The University of Missouri-St. Louis with a degree in History, she prefers to write contemporary romance. She loves to create stories that are emotional and lovely with sex that is integral to the characters' romantic arc. Her books include straight couples, curvy couples, gay, and multicultural couples. Love is love and everyone should have their story told.

Christa lives in Houston, Texas with her two dogs, and is a semi-retired member of Houston Roller Derby. She enjoys hearing from readers. For more on Christa's work, including deleted scenes, excerpts, and free reads, visit www.ChristaTomlinson.com 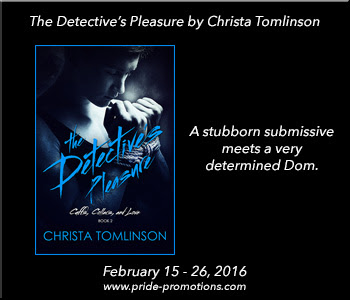 25-Feb
Wake Up Your Wild Side, KathyMac Reviews

Rafflecopter Prize: 3 copies of book one – ‘The Sergeant’