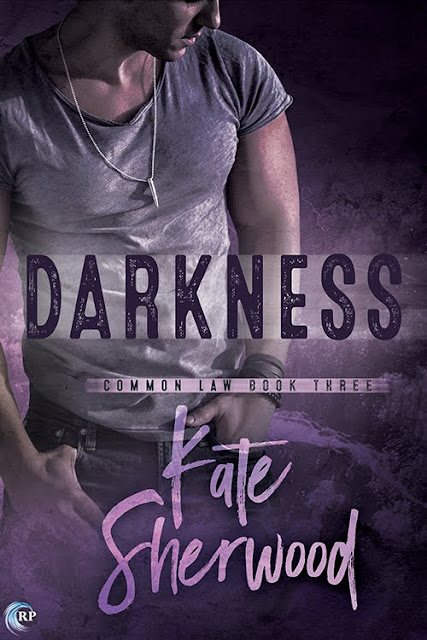 About Darkness, part 3 in the Common Law series

A murdered prostitute. An obvious suspect. Clear evidence. For once, Jericho Crewe has a straightforward crime to investigate, and Wade Granger isn’t involved.

It all seems so simple, but Jericho’s instincts won’t let him rest. As he investigates, he finds troubling suggestions that the murder is a part of something larger and more sinister. But working within the boundaries of the law may keep him from finding the truth. If Jericho doesn’t break the rules, an innocent man may rot in jail while a killer remains free to strike again.

Inevitably, it all comes back to Wade. Because who else knows as much about breaking rules? And who else knows Jericho the way Wade does—not wisely, but far, far too well?

Wicked Faerie's - Tell us a little bit about yourself and what you're currently working on.

Kate Sherwood - I’m a small-town Canadian, love animals and long walks on the beach… and I’m currently working on the fourth book in a self-published NA m/m series. The series is called Shelter; the fourth book is Pure Bred and will hopefully be out in May.

I’m also working on trying to get a bit of attention for another four-book series (don’t know what it is with me and four) called Common Law. It’s a cop/criminal romance, but a very slow burn – the characters barely even touch each other until the second book, but they sure do WANT to touch before that!

WF's -  Do you follow a layout or storyline when you write or are you a pantser? (aka fly by the seat of your pants writer)

WF's -  Is there a genre you haven't written in but want to? What genre would that be?

KS - Another great thing about romance is that you can combine it with most other genres, and I’ve had a pretty good run of doing that. Contemporary romance, romantic suspense, SF/F romance, YA romance… lots of variety. But I’d love to write some non-romance stuff at some point. It’s not that I don’t love romance, but there are some other stories I’d really like to tell!

WF's -  Do your characters 'speak/shout' at you to tell their stories or do you pick what story you want to work on next? Or do the Evil plot bunnies running rampant?

I have things pretty well under control that way. For the last few years I’ve based most of my writing decisions on business, more or less. I’m running two different pseudonyms and have a few different series going, so often my writing choices are made because I have a deadline for some series or some publisher or because I have to get something out there so readers don’t totally forget about one of my pseudonyms, etc.

I have a folder full of ideas for other stuff I want to write, when I get time, but… who knows when that will be?

5) Which of your characters is your favorite? Why?

I am a fickle woman – I pretty much follow a “love the one you’re with” approach to my characters. Whoever I’m working on at a given time is my favourite, but when his story has been told, I throw him away and don’t look back!

I’ve been talking about Jericho, from the Common Law series a lot lately, so he’s probably my current fave – he’s a smart ass, he tries to do what’s right, he’s self-deprecating but not meek – lots of fun!

Had to go to Goodreads to answer this one…

Counting audiobooks? The Rosie Project (audio – cute!); At Home: A Short History of Private Life (audio – mostly interesting, but spent too much time on public life for my taste!); Frederica (Georgette Heyer – one of my favourites from her!); Envious Casca (another Heyer – not one of my favourites); The Talisman Ring (damn, another Heyer. I tend to find an author I like and read myself silly, so… this is typical of me. And I enjoyed this book!)

To celebrate the release of all four books in the Common Law series, we’re giving away one four-tour-wide GRAND PRIZE of $100 in Riptide credit! Enter at each stop on each tour (once they go live) to maximize your chances to win! Leave a comment with your contact info to enter the contest. Entries close at midnight, Eastern time, on April 8, 2017. Contest is NOT restricted to U.S. entries. Thanks for following the Darkness tour, and don’t forget to leave your contact info!