Step by Step by K.C. Wells - Blog Tour with Review and Giveaway 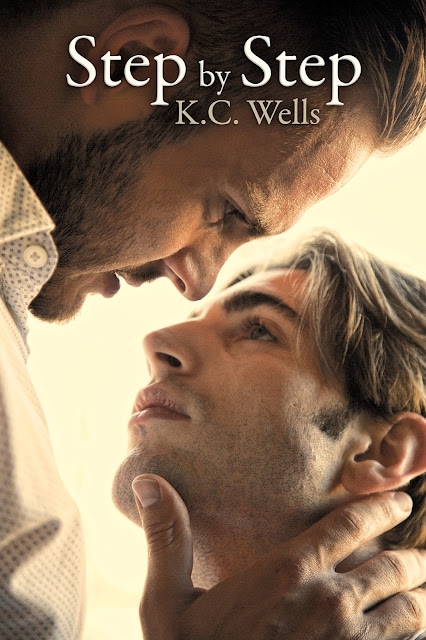 Jamie’s life is one big financial mess, and it really isn’t his fault. However, the last thing he expected to find in the library was a Good Samaritan. He might have been suspicious of Guy’s motives at first, but it soon becomes apparent that his savior is a good man who has been lucky in life and is looking to pay it forward. Guy being gay is not a problem. Jamie’s not interested… or so he thinks.

Guy is happy to help Jamie, and the two men get along fine. But when Jamie’s curiosity leads him from one thing to another, Guy finds himself looking at the younger man with new eyes. What started out as a hand up is now something completely different….

Step by Step is a contemporary standalone romance.

I thoroughly enjoyed Step by Step, from the characters, to the storyline, all the way to the pacing of the story. This is one of those stories though, that may be hit or miss for different reasons for readers. Step by Step is at it's core a slow burn May-December romance with a dose of sexual self discovery on Jamie's part.

Jamie is a hard working student who just so happens to have run out of luck. He's in his last year of school, getting ready to take the LSATS, and working 3 jobs just to stay ahead of the game. A game his parents were supposed to be helping with but are now going through a messy divorce leaving him to fend for himself. Just at the right moment, after receiving a text message that makes things worse, Jamie runs into Guy. Seeing how bleak Jamie looks, Guy offers to buy him a coffee and then offers him a proposition.

Now I can hear the wheels turning for some.. a proposition? That sounds nefarious....but no.. really it's not. Guy is attempting to "Pay It Forward" because at a similar time in his life, someone stepped in and helped him get his life back on track. That's all he's offering to Jamie, is the possibility to get his life back on track without working himself into the ground or having to drop out of school. The only caveat is that when Jamie is able to in the future, if he can, in turn, Pay It Forward to another person who might need a helping hand. Jamie of course is taken aback and not sure what to think. After all why would a total stranger, even one like Guy, want to help him out without any strings attached.

So this isn't a direct set up at the start of the story that either is attracted to the other, and there are no sexual overtones to Guy's offer. Now Guy does admit later to his friend that he finds Jamie attractive but then he also remembers that he's the same age as his children and doesn't act on it. Eventually things do change on both sides and this slow, and very sexy dance of attraction happens between Guy and Jamie. And it is a very sexy burn of attraction, particularly their first kiss. That scene, well I had the pleasure of hearing the author herself, read to us at GRL 2016. That little scene made me anxiously wait for this book..and then devour it once I got my hands on it.

I liked this book, like really enjoyed to the point where I didn't come up for air while reading it. Jamie is a doll, and Guy is a solid, strong character, while they do both have some stereotypical traits, they both work together in this book. Jamie's own issues with his sexuality was probably the only little thing that hit me as a bit of 'he doth protest too much'. I loved Guy's interactions with his daughter, but almost thought his son was put in almost strictly as the conflict/drama of the story. Otherwise There are no major issues to this book, at least for this reader. The pacing of their relationship from start to finish worked with the storyline. The dialogue parts in the story were engaging, at times fun and serious, and further progressed the storyline.

Overall this was a solid, well-written story with engaging characters that I would love to see in again or even pick up and read a few more times. I highly recommend this for a low-angst, slow but seriously sexy read.