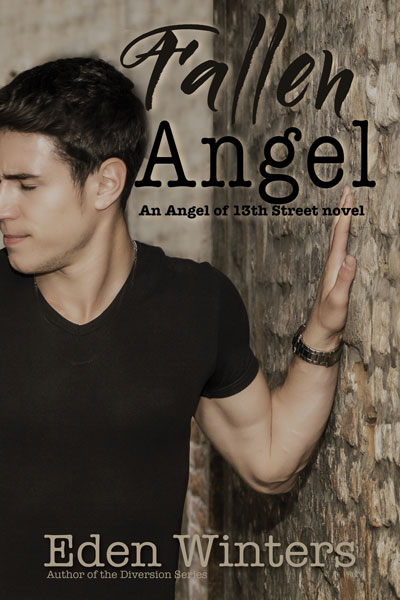 Synopsis
Who can save the rescuer of lost souls?
For ten years ex-rent boy Noah Everett has fought the good fight, offering second chances to those still in the life. Now he’s cracking under the stress. What began as a two-man mission is now going corporate, meaning rules, regulations and inexperienced volunteers needing guidance in a field Noah makes up as he goes along. Who can he turn to when his mentor’s strength is all but gone and his lover is leaving for college—possibly for good?
Four years at State with a full ride scholarship will launch Jeremy Kincaid’s future, but his present includes Noah, Doc, and the closest he’s ever had to a family. And a meth addict who’s become Jeremy’s own personal mission.
An attack sends Noah spinning out of control. Jeremy has to find the way to reach Noah before the man he knows and loves disappears forever.
Excerpt
Noah slammed a case of beer down in the cooler and fished his ringing cell phone out of his pocket. Nobody called his personal phone at this time of day without good reason.  “Noah Everett.”
“Noah? Hey, man. It’s Chip.”
Noah emerged from the cooler, passed through the bar and mouthed, “I’ll be back,” to Mary behind the bar. He stepped out the back door of The Twelfth Street Bar and Grill and plunked down onto a dry spot on the stoop. The rain had finally stopped, raising the humidity to sweltering levels. If this call didn’t need privacy he’d have stayed in the cooler.
“Have you thought any more about what we discussed?” Given the phone call, the caller probably had. Trouble was, thinking alone didn’t seem to be getting them anywhere.
The casual, “Yeah,” didn’t bode well.
“And?” Fuck.
A long silence followed. “Well, my… my boyfriend isn’t a bad man. I mean, he treats me good and stuff, it’s just that I don’t like… I don’t like—”
“You don’t like him pimping you out to other men,” Noah finished for Chip.
Inside his bar, sixty-seven notches decorated a doorframe, signifying sixty-seven rent boys who’d left prostitution behind and started over someplace else.
Had Doc Cook carved a notch somewhere when he’d pulled Noah from the gutter, dusted him off, and pointed him in the right direction?
What the hell made Chip stay with the user? Noah should’ve notched him in at sixty-eight by now. Instead Chip sat on a fence, dreaming of a better life and fooling himself into believing he could have it here.
An exasperated huff sounded in Noah’s ear. “Yeah. Things were cool until he started arranging dates for me.”
Arranging dates? Noah ran his fingers through his short hair and blew out a breath. Motherfucking pimps. More like pimples on the ass of mankind.
Chip continued trying to talk himself out of seeing reason. “I dunno, maybe he’ll stop. I mean, I know he loves me.”
Loves me? Chip had strange ideas of love. He loves me, and we’re only doing this until we have enough money to go away and have it be just us. Noah had said those same words to himself once.
But “us” never happened.
Empty promises had sustained him through sleazy meetings that had started with come-ons and a handful of cash and ended with Noah grateful when johns did him in a hotel room so he could scrub himself raw after they left.
And some johns had scared the fuck out of him.
Chip would be a hot commodity in certain markets. Cute, in an innocent, boy-next-door kind of way, easily influenced, with an inborn willingness to please, and, worse yet, gullible, much as Noah had been many years ago. Chip might as well hang a sign around his neck: “Use me!” No way would the boyfriend give up such a low maintenance source of cash.
Noah began pacing behind the building, boots crunching against gravel. Every kid who called forced him to relive his own past, his own fuck ups.
Damn it all to hell! Had the kid known so little love in his life that he’d cling to a sick illusion?
“Do you actually believe he’ll stop?” Noah kept because I sure as hell don’t to himself
More silence, a sigh, and then a rare scrap of reality from Chip. “No.”
Noah forced his voice calm when he really wanted to jump through the phone and fix the dumb kid’s life before it was too late. “From what you’ve told me, your parents are out of the question, but how about your grandparents? Or older brother?” Those were Noah’s first choices: stick Chip on a bus and let others with a personal interest manage putting his life back together. Second choice? Put him on a bus to a safe house; let those better qualified handle the details.
This time, no uncertainly colored the adamant, “No! Definitely not! I can’t go home.” More quietly Chip added, “But I’m not sure how long I can stay here, either. He… he talked to a friend of his yesterday.” Even through a telephone connection, Noah envisioned a shudder. “I don’t wanna be in videos.”
Oh shit. Videos. Noah slammed his hand against the wall. No!
“Charge extra for pictures, Noah,” Stevie had said. Noah’s pimp didn’t want to miss a buck, and every time Noah flexed and stretched, it was an easy extra that went straight into the pimp’s pocket.
Bad enough how Noah had made his living without adding hard evidence. It was only a matter of time before Stevie sent him to a studio.
Noah couldn’t go back in time and save his eighteen-year-old self, but he could save Chip. If only the guy would listen. 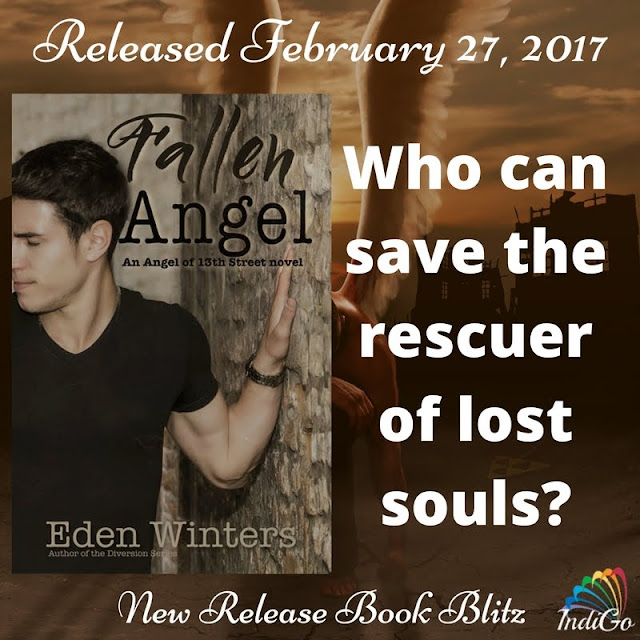 What’s in a Word?

Those who are familiar with my beta work and critiquing learned early on that I don’t really care for words like “walk”. What’s wrong with walk, you ask? Nothing, really, it’s a perfectly acceptable word, just… lazy. It doesn’t pull its weight or tell us much.

Yes, it tells that someone is going from point A to point B, but one little word change can impart much more information.

Case in point: Noah Everett. In The Angel of 13th Street he suffered a major leg injury, one that will hound him for the rest of his life. But rather than repeat the tale in Fallen Angel, or retelling the event, I can give a hint or reminder:

Now what if Noah sauntered? What if he strutted or swaggered? One simple word fix changes the entire meaning. Now, instead of appearing tired or hurt, Noah appears cocky or self-confident.

I’ve taken out my wrath on other lazy verbs in posts tagged “What’s In a Word” on my blog, Magnolias and Men.

And to find out more about Noah Everett, Jeremy Kincaid and the other denizens of 13th Street, pick up your copy of The Angel of Thirteenth Street and the sequel, Fallen Angel, today.

Meet the Author
You will know Eden Winters by her distinctive white plumage and exuberant cry of “Hey, y’all!” in a Southern US drawl so thick it renders even the simplest of words unrecognizable. Watch out, she hugs!
Driven by insatiable curiosity, she possibly holds the world’s record for curriculum changes to the point that she’s never quite earned a degree but is a force to be reckoned with at Trivial Pursuit.
She’s trudged down hallways with police detectives, learned to disarm knife-wielding bad guys, and witnessed the correct way to blow doors off buildings. Her e-mail contains various snippets of forensic wisdom, such as “What would a dead body left in a Mexican drug tunnel look like after six months?” In the process of her adventures she has written fourteen m/m romance novels, has won several Rainbow Awards, was a Lambda Awards Finalist, and lives in terror of authorities showing up at her door to question her Internet searches.
When not putting characters in dangerous situations she’s a mild-mannered business executive, mother, grandmother, vegetarian, and PFLAG activist.
Her natural habitats are airports, coffee shops, and on the backs of motorcycles.
Website | Facebook | Twitter |
Goodreads | Google+ | eMail Other