Shift by Shelley Grayson - Blog Tour with Review and Giveaway 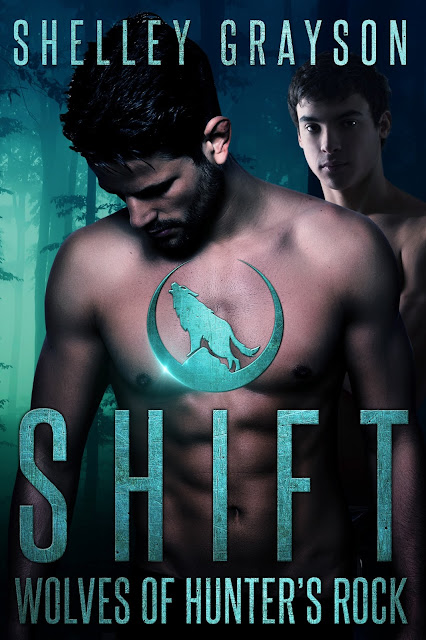 Lukas Vance finds a list of towns, and in each one he discovers a murdered 19-year-old who smells almost like pack even though he knows they can't be related to him. He reaches the next town on the list before the killer, determined to get the intended victim out of this situation alive. When he catches the familiar pack scent and sees the guy it belongs to, Lukas wants to do so much more than protect him.

Chris Keenan doesn't know why gorgeous, broody Lukas thinks he's in danger. Lukas says he wants to keep him safe, and when Chris freaks out Lukas is the only one able to calm him down. Chris has been feeling off for a while, and whatever's causing that seems to be related to the list of towns and the murderer who's made him a target. Instead of going to the police, Chris puts his trust in Lukas. But even with Lukas protecting him, figuring out what's wrong with him may be the last thing Chris ever does.

Shift is a 98,000-word novel for people who want some gay shifter romance inside their urban fantasy, ensemble cast adventure.

4 out of 5 stars
Shift is the first book in what looks to be a new m/m urban fantasy series with a little bit of added romance.

Chris is your mostly normal 19 year old, going to school and trying to figure out what's next. He hangs out with his friends, and gets along with his dad, if not his mom. Recently though, he's been feeling weird.. hungry all the time and that one odd instance the last time he was with a guy just made him wonder what the hell was going on.

Lukas, on the other hand, has stumbled on a handwritten list after a horrific discovery in one town with another teen who smells like pack, he starts following the trail. A trail that leads him right to Chris...who also smells like pack. Things start happening that make Lukas question what's going on and his almost instant attraction to Chris keeps him close by.

With a good ensemble 'cast' Shift tells a solid, albeit long, character driven story. At it's heart Shift is almost strictly an urban fantasy. My only 'ding' on my rating is that I felt a that there wasn't enough of a mythology or backstory given to completely draw you into the paranormal aspect of the story. I was very intrigued, enough that if there's a second book, which by the ending I'd say there is, then I'll definitely pick it up.

The characters, at least for this reviewer, were what kept me picking the story back up. I'd have loved to have more on-screen time for Albert and Roger, and look forward to more of Griffin, who is Lukas's brother. Albert added a lot to the scenes he was in, both as the best friend side-kick, and the comedic relief character. He kept the mood steady vs dreary, which easily could have happened without his added levity and general character traits.  There were two characters that I wish had been fleshed out a bit more but their limited on-screen time didn't really lend itself to that part. Hopefully in any follow up books there will be more to those characters along with the others.

Shift was my first book by this author and I will definitely give her another read. I would  recommend this for those readers out there that enjoy m/m urban fantasy and even light romance m/m paranormal. This is one to take some time with and absorb and definitely give this author a try.

Shelley Grayson grew up on a riverbank in a microscopic town, and now lives in a slightly bigger town with a rescue cat she didn't really want and now can't imagine life without. When she's not writing, she's wishing her daughter's college wasn't so far away. If she's not wearing her glasses, she probably won't recognize you, even if you plop down in her lap. And then you'd be blocking the TV, where she's probably watching old episodes of MST3K and Star Trek.

She loves gay romance, adores werewolves and other paranormal creatures, and doesn't want to bother if there's not a happy ending.