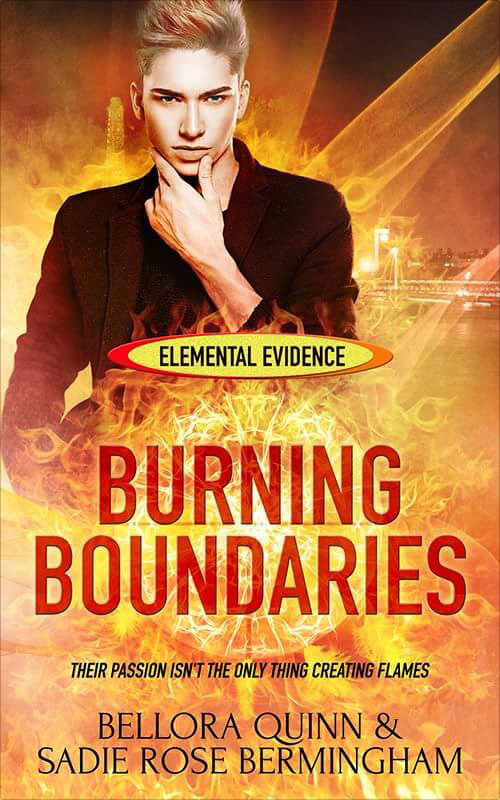 Mari Gale’s life has been a whirlwind since meeting Jake Chivis. A new job prospect and his mother’s health preoccupy him, so when Jake invites him on a date he’s ready to cut loose. Their night out turns into a nightmare when a fire breaks out in the basement of the bar and they barely escape.

Soon Jake learns that the horrific accident is being investigated as a possible homicide, and it’s not the only case. Detective Inspector Cordiline of the London Met hints at spontaneous human combustion, but as far as Jake knows, SHC doesn’t exist.

When Mari looks into a group called Birthright, he finds a connection to the victims of the fires and Jake risks himself to go undercover at the shadowy organization. The race is on to determine the truth before Jake becomes the next target.

Former Detective Jake Chivis is a Fire Elemental who uses psychometry to see the past. Doctor Ilmarinen Gale is an Air Elemental, a human/cybernetic interface, able to infiltrate even the toughest information systems. Together they find out just how potent a combination Fire and Air can be when it comes to solving crimes.

Amid murder, conspiracy and a world that views them with suspicion, and sometimes contempt, Jake and Mari circumvent the conventional. While the police aren't always appreciative of their methods they can't deny the results.

When they aren't busy consulting for the police, figuring one another out is their next big mystery. One that proves as frustrating as it is passionate. Between hunting killers and avoiding competing government agencies that want the two of them working on their side, they just might have enough time for love.

Was that flirting? Was he flirting with the guy? Jake tried to rein those thoughts in but he couldn’t help it. Mari had a habit of flirting, but it had never bugged Jake before. Jesus, they’d managed to go to one bar for an hour and already he was devolving into Neanderthal territory. He realized something else. It had never really bothered him when he and Alex had gone out and his ex had spent all night coming on to strangers. Then again, he’d known Alex was doing it to get a rise out of him. That was not Mari’s way, at all.

“You want another drink?” Jake asked, by way of keeping himself from hauling Mari out of there and grilling him about whether he wanted to sleep with Mr. Whips and Tattoos. They had to step to one side as a sweating, agitated-looking guy pushed by them on the stairs in an obvious hurry to get down to the basement for some chastisement. Though he looked chastised enough already, in Jake’s opinion.

“If you do,” Mari said, then exhaled a huff that might have been regret and might have been relief. “Unless, of course, you just want to put me over your shoulder and carry me out, Mr. Caveman. I wasn’t giving him the come-on. So you can stop looking daggers. And don’t deny it.” He pointed a slender finger at Jake as he opened his mouth. “I could see you thinking it. Yes, he’s very cute, but he’s not really my type. I do like his toy box though.”

Jake snapped his mouth closed then pushed a hand through his hair and let out a sigh of his own. He had always pitied guys that acted like possessive jerks and here he was being as transparent as glass, all but snarling at anyone who got too close to Mari. “I’m sorry. I was aiming not to be obvious. I’ll try and refrain from clubbing you over the head and dragging you out by the hair.” He managed a sheepish grin.

“In that case, it would be my pleasure to have another drink with you, Chivis.” Mari chuckled, slipping a hand around the nape of his neck and towing him in for a brief, firm kiss.

They made their way back up into the bar and as they were weaving their way through the crowd, Jake heard someone shout, then screaming coming from the direction of the basement.

The red and gold lighting seemed to be flickering and Mari yelled, “Can you smell something burning?”

Jake noticed the smell just as Mari was saying it, and turned his head. A curl of pale smoke was winding up from the basement stairway, not thick but noticeable.

Jake gave him a push toward the front exit then shoved through the crowd, trying to get to the stairs.

Burning Boundaries is the second book in the Elemental Evidence series. For full reading enjoyment I highly suggest reading the books in order. However, prior to reading I did ask if it was necessary to read book #1 and was told that it wasn't.  I didn't miss any pertinent aspects from the first book to this one, but there were things mentioned in the story that would have been better after reading the previous book.

Just from reading the blurb on this book, I was excited. Both of the main characters grabbed my attention, and that did not change after reading the book. Mari and Jake are both very complex characters, with hidden aspects, and both exhibit growth and change throughout the story. I also really liked that they had very different personalities, and divergent life experiences. These two characters truly compliment each other because of those aspects.

This story was the type of story that just grabs you into it and doesn't let you go very easy. In other words.. I didn't want to really put it down, even when necessary. I wanted to constantly see what was going to happen next with both Jake and Mari, and the storyline itself. Burning Boundaries is on that fine line of an Urban Fantasy book, with high romantic elements. Which for me is the best of both worlds. I love urban fantasy books, that there is a possibility of more walking around in plain sight is one thing that intrigues the hell out of me. You could also call this a paranormal romance, because the romance is as important to the storyline as the action/mystery of the story's conflict.

So truly Burning Boundaries offers something for both UF fans, and Paranormal Romance fans, and even romantic suspense fans with the thread of mystery running throughout the story. This is another book that I would highly recommend other readers to grab and devour for their summer or even fall reading enjoyment.  I have actually picked up the first book and will read that in the near future and then may even revisit this story afterward.

I look forward to the future books in this series.

1. I love horses and learned to ride when I was a small child.

2. My first job was working at a stable feeding horses and cleaning stalls.

3.  I’ve lived in big cities most of my life but if I had my choice I’d rather settle in the country. I don’t think Mari agrees, though.

4.  My favorite ice cream is Ben and Jerry’s Chunky Monkey.

5.  I love winter. Skiing, snowshoeing, sledding, snowmobiles. I love all of that.

6.  My grandmother was the biggest inspiration in my life. Her calm manner made me work on getting my temper in check.

7.   I learned traditional dances and loved dancing at powwow.

9.  My favorite color is red, but I don’t think it looks good on me so I don’t often wear it.

10.  I’ve always been good with animals. I’ve never come across a dog, cat, or horse that wasn’t friendly toward me.

11.   I live in London, one of the most crowded cities in the world, and I hate being in crowds. It’s like people deliberately want to shed their memories on me.

12.  The first memory I ever picked up from an object was from a fireplace poker when I was about five years old. I got a clear memory of my grandfather tending the fire while laughing with my grandmother. He died before I was born so my grandmother was a little confused when I told her about it.

13.  I don’t watch much TV but I love old movies from the forties and fifties.

15.  I eat healthy about ninety percent of the time, but my favorite junk food is chips and salsa.

16.  I don’t think kids are in the future for me, but I’d like to be an uncle one day and spoil my nieces and nephews.

17.  Old memories I pick up are just as sharp as newer ones and it’s weird to have to try and figure out if I’m seeing something that happened last week or twenty years ago based on clothing and surroundings.

19.  I’m not above bending the rules a bit if justice is served.

20.  Mari is the best thing that’s ever happened to me, but he doesn’t know it.

Originally hailing from Detroit Michigan, Bellora now resides on the sunny Gulf Coast of Florida where a herd of Dachshunds keeps her entertained. She got her start in writing at the dawn of the internet when she discovered PbEMs (Play by email) and found a passion for collaborative writing and steamy hot erotica. Soap Opera like blogs soon followed and eventually full novels. The majority of her stories are in the M/M genre with urban fantasy or paranormal settings.

A storyteller since before she started school, Sadie also enjoys reading, photography, live music and long walks on the beach. Sadie has worked as a bookseller, a pedigree editor for the racing industry and a local and family history researcher. Originally from the north of England, she has been working her way across the UK ever since. She currently resides on the south east coast with her long term partner, where she hopes to buy a mobile home and establish a whippet farm.