Hunter by JM Dabney - Blog Tour with Review and Giveaway 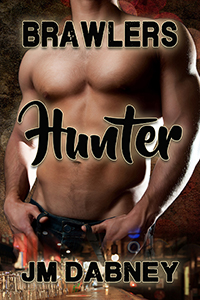 If there was a way to destroy his life, Hunter Black could do it. He was a catastrophe waiting to happen. Survival was his only priority and having to leave his old life behind meant a job of the legal variety. He’d found one as a bartender at Brawlers Bar and a safe place in a huge house with the rest of the bar crew who quickly became the family he’d never had. The one thing

Hunter didn’t need was his old life tracking him down.

Deputy Wren Gramble hated his job and his weekend assignment of staking out a bar in the middle of nowhere waiting for drunks. Although he’d heard the homophobic and racist jokes going around about the crew and customers, he kept his head down and stuck to his job and nothing else. He despised being driven back into the closet, but he’d reached the end of the line, and he didn’t know what he’d do if he earned another transfer.

Linus Trenton was considered the normal one in his family and according to the weird ones that meant he should be punished daily. He never came out one way or another, if he found someone attractive, he was attracted. His life was complicated enough having a crush on the sweet and awkward Hunter, but now he had to throw Wren into the mix. Linus didn’t have time for dating or romance, most of the time he didn’t even think about having a sex life. Although, Wren and Hunter were ruining his calm.

Hunter was in lust with the handsome deputy the minute the man pulled him over, but a man like that wouldn’t give him the time of day. His friend, Linus, was another matter altogether. Hunter wanted both. His bosses made it work with their man, why couldn’t he? Could Hunter prove he wasn’t as much of a screw up as he appeared or would he have to call in backup to claim his men?

Hunter is the fourth book in the Brawlers series. I would recommend reading the series in order, starting with the Twirled World Ink series and moving into this one. Many of the characters are featured in the previous books and there are continuing storylines. Not only that..the stories are all good reads with interesting characters.

I have to say that Hunter is my favorite of the Brawlers so far. He's a very relateable character, and will be for many readers. He's a bit clumsy, and has some self-esteem issues thanks to his past. This all just makes him a very endearing character. He's one that you want to have a happy ending and find someone that boosts him up and makes him realize that he is worth it. Enter into the picture Wren, one of of the newest deputies in their town.

Wren happens to be 'assigned' to watch the Brawler's bar  on a regular basis and he's definitely noticed Hunter. Finally one day he encounters the Brawler's crew out for breakfast after he gets off his shift and ends up sitting next to Hunter. They strike up a conversation and things go on from there. Mostly.. there is a huge attraction on both their parts but there's another thing, well person to consider. Linus, who's wanted Hunter for ages but never wanted to lose Hunter's friendship by asking him out and things not working. Wren however notices the attraction between the two men and after an emergency with Linus, Wren tosses out an idea that would involve all three men.

This definitely doesn't feel like most menage or poly stories that I've read previously. They didn't just dive right in and everything worked perfectly. They had to actively work to make things work, which I really liked since that is more organic to a developing relationship of any kind. I also just truly enjoyed the storytelling in this one. I'd just recently discovered this author earlier this year and have literally devoured all of their books. With each successful book the author has consistently gotten better, the stories, the characters, and the world around them feel way more natural. The interconnected worlds with the series is one of the other things that I absolutely love. You get to see those characters you enjoyed previous living their futures with the person they had an HEA with in their book.

I'll totally admit it... sexy, bearded men covered in ink is totally one of my favorite kind of men to see and read about. Their partners are mostly the direct opposite of them but they all work as couples, and as each other's family, as well. I consider this series a new favorite, and the author has quickly become an autobuy for me. So yes, I look forward to each new book that they publish and each new character they create.

I'd highly recommend not only this book but both series, soon to be  3 series with The Executioners. I can't say enough about how much you'll enjoy the stories, the guys antics, and even the secondary characters with huge personalities. Definitely pick up this book and the rest of the series. You won't be disappointed.