City boy, sci-fi novelist, and recovering pushover Scott Howe doesn’t know what to expect when he inherits his grandmother’s house outside the quaint village of Gilead, Ohio—but it isn’t an enormous bald man in nothing but tighty-whities and orange rubber boots shouting at him to keep his weed wacker away from the rhubarb patch.

Scott has never met anyone like Phineas Robertson: homesteader, recluse… Republican. A tender—if unlikely—friendship grows over the summer while Phin and his schnauzer, Sister Mary Katherine, teach Scott about life in the country and the grandmother he never knew. Opposites attract, but widower Phin worries his secret will send Scott running faster than his politics, and Phin isn’t convinced he deserves a second chance at romance.

Scott is convinced—rural life, and his one-of-a-kind, older neighbor, is the future he wants. Before he can settle in, his mother drops a bombshell that strains their already tenuous relationship, and a cousin who believes he is the rightful heir to the property puts Scott in danger. It’ll take a lot of compromises, and even dodging a few bullets before they’re out of the weeds, but nurturing something as special as true love always takes hard work. 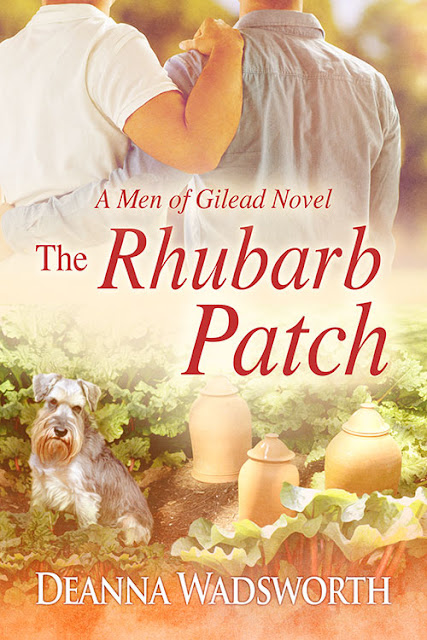 Chapter One
“What the…?”
A big, bald man in nothing but orange rubber boots and tighty-whities streaked across the yard toward Scott Howe, waving his hands and shouting.
The high-pitched whir of the weedwacker shredding through the grass and thick, leafy weeds growing along the edge of the small barn went silent when Scott released the handle. Popping out his earbuds, he blinked hard, unable to believe his eyes.
“Stop! Stop!” the man in his underwear shouted. “You’re killing the rhubarb!”
Instinctively, Scott placed the weedwacker in front of him, wielding it like a knight brandishing a sword against an attacking dragon.
At five eight, Scott wasn’t exactly a small guy, but he wasn’t taking any chances.
“Stop, dammit!” The man flailed his arms above his head.
Then Scott registered his words.
Keeping the weedwacker in front of him with one arm, he raised the other in truce. “I stopped!”
Scott divided glances between the crazy man and the bits of grass and dark green leaves. All kinds of weeds grew around his late grandmother’s property, making the yard look like crap. Whether he decided to stay or sell the place, it needed a major spring cleanup.
“What the hell are you doing?” The man came to a halt, all but shoving Scott out of the way. He knelt on the ground and began pushing aside the grass. “Dammit, you probably killed this one!”


What’s he talking about?

Scott took a step away as the man in his underwear and orange garden boots hopelessly muttered under his breath, gently picking up the curly green weeds.


“Hey, man, I’m sorry.” Scott brushed his arm across his forehead before sweat ran into his eyes. “I didn’t know this was your property. The realtor told me my property line was five feet past this barn.”
The man stared, bright blue eyes scrunched with incredulity. “It’s not my property, but it is my rhubarb. Nancy and I’ve been growing it for years.”
Scott flinched. “Oh, you knew my grandmother?”
“Yes, she was my best friend, and you just killed some of our rhubarb.” His voice hitched, a twinge of desperation in his eyes.Not in anger but a deep, profound sadness that a hot wash of shame down Scott’s back.
“I’m sorry, but….” He paused, not wanting to sound like a stupid city boy coming out to the country. “But what’s rhubarb?”
Still on his knees, the peculiar man sat back on his haunches. Scott glanced at the guy’s lap, then darted his gaze back up before he noticed the faux pas—but not before taking note the guy was packing some real heat in those less-than-brand-new underwear.
The man gestured to the shredded weeds. “That’s rhubarb. Well….” He pursed his lips. “It was rhubarb.” His broad shoulders slumped, the golden hairs of his chest sparkling a little in the morning sunshine.
“I’m sorry,” Scott said again. “Are you sure I killed it?”
He shook his head and flicked at the plant waste. He straightened a few curly leaves hidden among the shredded ones, but they collapsed. “This one’s done for.” He glanced down the twenty-foot length of the barn. “Thank God I saw you before you killed all of it.”
Getting a little annoyed at this hulk of a man, Scott leaned on the weedwacker, his other hand on his hip. “Hey, I’m sorry you planted stuff on Nancy’s property. But how was I supposed to know? I just inherited this place, and I don’t even know what rhubarb is.”
Those piercing blue eyes scoured Scott from head to toe, then back again. “I suspect you’re Scott.”


“Well, Scott, I’m Phineas Robertson.” He flipped a thumb over his big shoulder. “That’s my house, and this here’s my rhubarb patch.”
“Hello, Phineas.” He gave the man a courteous nod, wondering if he should’ve called him Mr. Robertson, though he couldn’t be much older. But the guy had a big presence, an authority about him—even in his underwear—that could not be denied.
When Phineas remained quiet, Scott grew awkward. “I’m sorry I weedwacked your rhubarb. Are there any other plants of yours growing on my property?”


Phineas put his hands on his hips, his fur-dusted belly rounding out. “No, just the rhubarb.”
Feeling bad for sounding like a jerk, because Phineas was clearly distraught about the plants, Scott nodded. “Okay, so maybe you could show me what I can and can’t trim out of this section.”
Hopefully the offer would create a neighborly truce.
“Yeah, that’s a good idea.” Phineas fixed his gaze on the shredded rhubarb, though to Scott it all looked like weeds.


I’m gonna have to google rhubarb.


Phineas climbed to his feet. “Here, let me show you what parts you can pull. I haven’t gotten around here to trim it up, what with the funeral and everything.”
So Phineas had attended Nancy’s funeral. Well, that was more than could be said for Scott.
Phineas towered a good six inches over Scott, and almost all of that burly frame was bare and exposed. Scott gestured to his state of dress—or lack thereof. “You sure you don’t wanna put on some pants first?”
Awareness of being clad only in underwear and orange garden boots dawned bright across Phineas’s face. Glancing down, he gave a rather sheepish smile, which made him very appealing all of a sudden. “Yeah, I should probably do that.” He stood there for another moment before taking a few steps away. Then he paused, pointing at Scott. “Don’t cut anything until I get back.”
“I won’t.”
Then he stomped off rather proudly in his underwear and boots, tossing out over his shoulder, “If you weedwack the asparagus along the fence, you’ll regret it.”
Scott shook his head and laughed.
While Phineas walked away, Scott surveyed the three-acre property that had literally fallen into his lap.
Feathery clouds streaked the pristine sky as if an artist’s brush had smeared a blue canvas with a wash of white. Everything was greening up with spring. The cute white farmhouse he’d inherited looked cheery, though it needed some work. It was connected to a one-car garage by an overhang, and the peaked roof with two dormers gave the two bedrooms upstairs odd slanted ceilings. Not in the best shape, nor the worst. Flowers already popped up in the mulched beds around the house and garage—a sign of brighter things coming my way, maybe?
Smiling to himself, Scott flipped over a dirty old five-gallon pail by the corner of the barn. He took his iPhone out of his pocket and sat down. After unlocking the screen, he opened the Facebook app.


Nobody will believe this.


Since moving into the house three days ago, he’d been entertaining his Facebook friends and fans online with Country Updates. That was the only writing he was getting done these days, much to his editor’s chagrin.
Country Update #4: You guys will never believe what just happened! I was weedwacking at the farm and suddenly I see this big, bald guy wearing nothing but his white skivvies and big rubber orange garden boots barreling towards me! LOL I guess he’s my neighbor. He’s been growing rhubarb along the barn, but I just weed whacked some. Whoops! LOL Now will somebody tell me what the hell rhubarb is? #truthisstrangerthanfiction #cityboyinthecountry 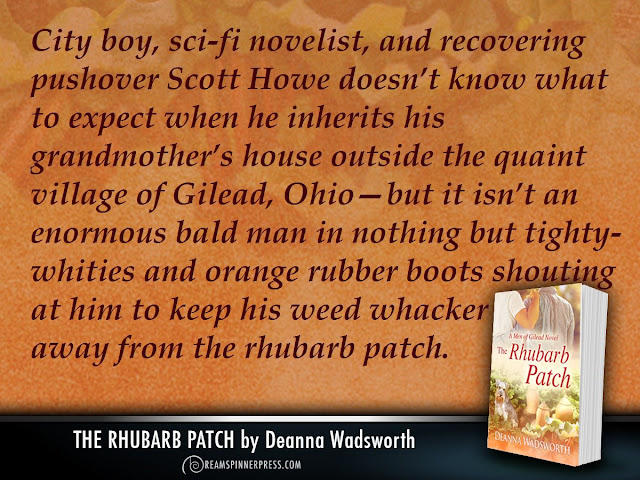 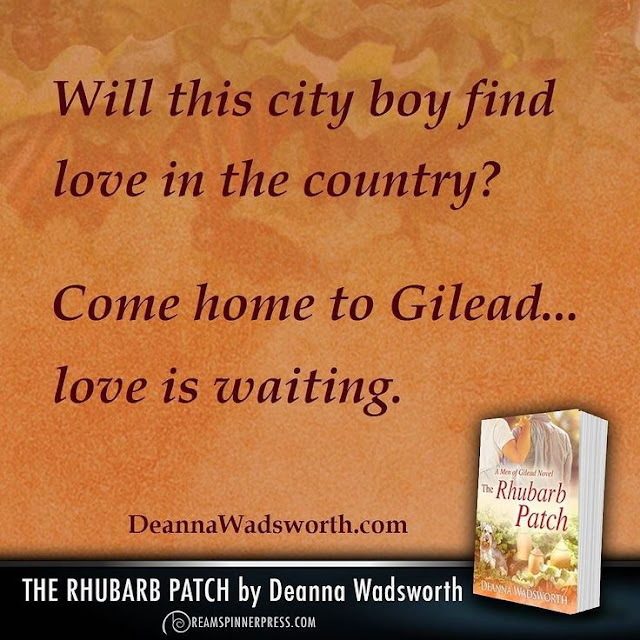 Deanna Wadsworth might be a bestselling erotica author, but she leads a pretty vanilla life in Ohio with her wonderful husband and a couple adorable cocker spaniels. She has been spinning tales and penning stories since childhood, and her first erotic novella was published in 2010. She has served multiple board positions at her local RWA chapter and is the current President 2017 for Rainbow Romance Writers of America. When she isn’t writing books or brainstorming with friends, you can find her making people gorgeous in a beauty salon. She loves music and dancing, and can often be seen hanging out on the sandbar in the muddy Maumee River or chilling with her hubby and a cocktail in their basement bar. In between all that fun, Deanna cherishes the quiet times when she can let her wildly active imagination have the full run of her mind. Her fascination with people and the interworkings of their relationships have always inspired her to write romance with spice and love without boundaries.