Kyle Vaughn had three goals in life: become a vet, find the man of his dreams, and start a family. He easily checked off the first item on the list when he took over his grandfather’s veterinary practice. Too bad he wasn’t as lucky in love.

Chaz Hamilton took a leap of faith when he decided to pursue a career in writing, but one best seller didn’t mean he could quit his day job. All work and no play threatened to make Chaz a very dull man when the only romantic action he saw was in the pages of his manuscript. Too bad he couldn’t write his own happily every after.

Circumstances pushed the two men together, and one magical kiss beneath fireworks and stars changed everything. Kyle knew his luck had finally turned around and Chaz found a man far better than any book boyfriend ever written. There was just one problem. Chaz has kept a secret from Kyle that could ruin their chance at a beautiful life together.

Kyle and Chaz learn that the best-laid plans often go awry, the heart has a mind of its own, and the greatest love is unscripted.

The books in the Road to Blissville series can be read either as standalone books or as part of the series. This book contains sexually explicit material and is intended for mature adults 18 and older. 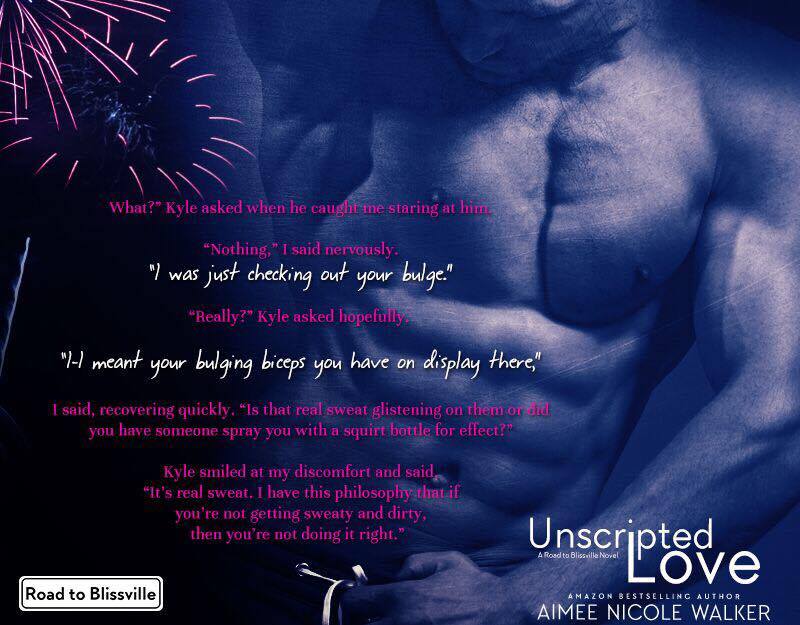 "Dr. Vaughn!” A familiar female voice exclaimed. “Oh my goodness! You’re the answer to my prayers.”

I spun around and faced Jenny Davis who operated the Carter County Animal Shelter. “That’s what he said,” I replied, jerking my thumb in Chaz’s direction without thinking my actions through. Chaz gasped, Josh threw his head back and laughed in delight, and I’m pretty sure that Andy growled. I chanced a peek at Chaz’s and caught him staring at me with a dumbfounded expression on his face. How much more obvious did I need to be that I wanted to see where things could go between us?

“Is this a bad time?” she asked nervously. “I’d like to ask a favor of you.” My staff and I volunteered ten to fifteen hours a week treating the dogs and cats at her shelter. The last time I was there, she mentioned that she needed to raise money for the shelter. I figured that she wanted to discuss a fundraiser with me.

“Not at all, Jenny. Josh will be delayed a few minutes, so I have time now.”

“Well, it’s a big favor,” she said hesitantly. “Remember how I mentioned a fundraiser to you?”

“Sure and I’ll help out however I can,” I told her.

“I’m so glad you feel that way because you play a big part in what I have in mind.” She clapped her hands and bounced on her feet. “I can’t believe I didn’t think of this sooner,” she said to herself.

“How big?” I asked, narrowing my eyes as an uneasy feeling came over me.

That feeling only increased when she broke eye contact and looked down at her feet. “We’d like to do a calendar with the animals at the shelter. One of my staff is an amateur photographer and is willing to donate the time to take and edit the photos.”

“So you’re looking for donations to cover the cost of producing the calendars? I’ll gladly help out with that,” I told her. Jenny didn’t meet my offer with as much enthusiasm as I expected.

“Not exactly the kind of help I was looking for from you,” she said.

“No? How else can I be of service to you?” I asked, clearly confused. I provided free veterinarian services and offered to…

“She wants you to pose for the calendar,” Chaz said, interrupting my thoughts.

I looked over at him and rolled my eyes. “No, she doesn’t.”

“Oh, I think that’s exactly what she’s working her courage up to ask,” Chaz told me. “Isn’t that right, Jenny?”

I looked at Jenny, expecting her to brush off his idea, but all I saw was a hopeful gleam in her green eyes. “Me?” I asked in disbelief.

“Why not you?” Jenny asked, seemingly emboldened when I didn’t refuse the idea outright. “You’re gorgeous, built like a brick house, and adore animals. Who else would I ask?”

“Stop being so modest,” Jenny told me. “You’re exactly what we need. I can see it now…” Her voice trailed off while she envisioned something in her mind. “Shirtless poses with a kitty, cowboy hat and boots while standing beside a horse…”

“I’d be wearing more than just a pair of boots and a hat, right?” I asked, needing clarification before the conversation went any further.
“Dr. Vaughn!” Jenny’s said in shock. “Why, I’d never suggest such a thing.” Then she covered her mouth with both hands and giggled nervously. “Oh my,” she answered, fanning herself. “That’s not at what I meant at all. Dear me, I meant my offer as a complement, Dr. Vaughn. I thought your love for animals combined with your hunky looks would make a great fundraiser.”

“It would probably sell a lot of calendars,” Chaz said, chiming in.

I looked over at him and caught him staring at me speculatively. “But would you buy a calendar?” I asked.

Unscripted Love is the first book in the Road to Blissville series and is a spin-off of the author's Curl Up and Dye Mysteries series. While you don't necessarily need to read the previous series, I'd suggest it due to the characters are featured throughout the stories.

This book is Chaz and Kyle's, aka Dr Dimples, book and picks up after Chaz's first book has been released. There is a good deal of backstory between these two characters that has taken place off screen and is mostly told to the reader as the story unfolds. As I haven't read the previous series yet, I'm not sure if the backstory is shown in one of those books.

The pacing on this story was a little slower then I preferred but the story itself is well written. So that may not be an issue for other readers. I think my main issue was the hot and cold personality of Chaz regarding his lust/love for Kyle. I get that  he was afraid to tell him about their previous interactions online but it almost became too much of a thing that distracted from these two very awesome characters. And I really DID like both Chaz and Kyle..I mean seriously Dr Dimples is all sorts of adorable, especially when he's with animals. Chaz's quirky personality fits well with Kyle's comic book nerdiness.

I did ultimately enjoy reading the book, and look forward to the next book in the series. I just would have liked a little more, less angsty times between Kyle and Chaz, and more dating and spending time with each other as they built their relationship. Once we got past the 'big secret' that Chaz was hiding, the pacing picked up and the story was  even more engaging as these two men figured out what they meant to each other.

I do recommend that every reader gives this book a try, the few things that didn't work for me, may not be an issue for others. As we know we all have different likes and dislikes in our books...and this was still a very enjoyable, very readable book. The Characters alone are the reason to pick this one up and give it a go. If you've read the previous series this is definitely one to pick up as you'll see more of Gage and Josh and Mere and Harley.

I definitely look forward to the next book in the series.

I am a wife and mother to three kids, three dogs, and a cat. When I’m not dreaming up stories, I like to lose myself in a good book, cook or bake. I'm a girly tomboy
who paints her fingernails while watching sports and yelling at the referees.

I will always choose the book over the movie. I believe in happily-ever-after. Love inspires everything that I do. Music keeps me sane.