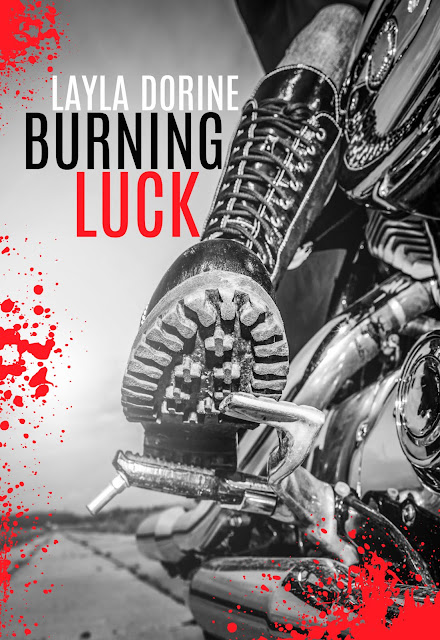 Lucky Strike McAllister isn't very lucky. In fact, he isn't much of anything most days, to hear his MC tell it. Since the death of his father from cancer and the suicide of his pops, he's done nothing but find ways to get into trouble. He's talented with an airbrush gun and an amazing artist when he sets his mind to it, but more often than not, the things Lucky sets his mind to are pretty self-destructive.

When Thorn and his partner Cain, members of the neighboring chapter of the Rollin' Jokers, are forced to fish Lucky out of the ocean on a chilly fall night, both men decide he needs a keeper and who better than them to keep Lucky from destroying himself. Too bad Lucky can't see that they're trying to help. Bitter and lashing out, he does everything he can to sabotage the home and relationship they're offering.

With secrets mounting and trouble knocking on their doorstep, Lucky struggles to find a way to put aside his anger long enough to get to know the two men who have taken such an intense interest in him. As tensions mount, will he look to take the easy path and he run from them, his club and everything he's ever known, burning bridges and the last of his luck in the process or will he stay and learn that there are better ways to burn? 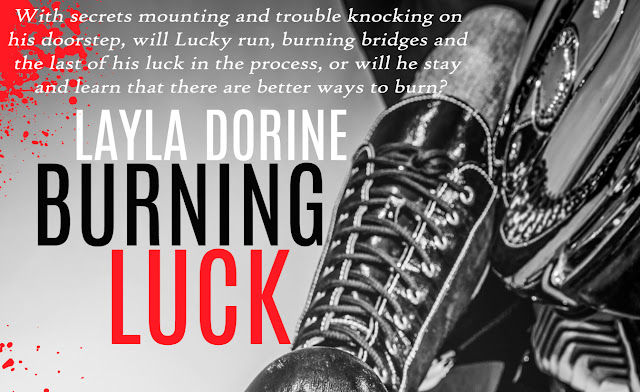 The photograph was old and a little bit faded, folded down the center from being kept in his wallet for years. Lucky stroked his finger across the surface, brushing away a little bit of sand. He was thirteen in the image, long before his Old Man had gotten sick and his Pops had decided he couldn’t deal with the grief of having lost him and decided to jump off a fuckin’ cliff. Everything had seemed almost perfect back then. Now, everything was just a disaster.

A Christmas tree loomed behind them, wrapping paper all around their feet, the camera had caught the lights twinkling, and the joy on Lucky’s face as he waved the keys to his new dirt bike toward the camera. The best part about the bike hadn’t been the freedom, it had been the time his Old Man and his Pops had spent teaching him to ride right. It had been the family races, the life lessons around campfires in the middle of nowhere, the stories, the laughter, the ability to just be away from town for a little while.

The crunch of boots on gravel caused him to hastily tuck the photo back in his wallet and shove it in his pocket again.

“You ridin’ out to the point?”

Lucky turned his eyes away from the rolling waves to see his best friend studying him intently.
“Naw, I can’t deal with that shit tonight,” Lucky drawled as he dug in his front pocket for a stick of gum. Trying to quit smoking sucked, at least the gum took his mind off it for a little while.

Lucky’s eyes narrowed into a glare. Of course he wasn’t okay, how the fuck could anyone expect him to be okay after the shit year he’d had? He seriously doubted that he would ever be okay again, but he knew his oldest friend was just trying to show concern for him, whether Lucky really wanted it or not. When Cody didn’t back down, Lucky just sighed and muttered curses about his persistence, wishing he’d just fuck off for a bit and leave him alone. He didn’t deserve Cody’s concern, or anyone else’s, not after all the bullshit he’d gotten into over the last few months. Maybe if he’d been home more instead of being stupid, his Pops wouldn’t have…

He swallowed hard, feeling his gut clench and his eyes start to sting, again. Deep breaths, he told himself, refusing to fall apart in front of Cody again. Tears were useless anyway, all of the damage had already been done. A cold wind blew off the water, making him shiver, and Lucky closed his eyes, breathed in the salt air and bit back a curse as he felt Cody settle on the rock beside him.

Lucky’s fists clenched, he bit the inside of his cheek to keep from screaming, No fucking shit at the top of his lungs. Instead he muttered, “I’m alive, that’s about as okay as it’s gonna get right now.”
“You’ve got to start easing up on yourself. Ray’s death wasn’t your fault.”

“I should have been there, Cody!” Lucky exploded, nearly falling off the rock as he turned towards him, frustration and anger practically radiating off of him. “Damnit, if I’d been there I could have talked him out of it, I know I could have. He was my Pops, he would have listened to me.”

“No, Lucky, he wouldn’t have, not in the end. Maybe that night, but you couldn’t have watched him twenty-four seven. If he was bound and determined to off himself, then damn it he was gonna find a way to do it, even if it was while you were off at the store grabbing a gallon of milk.”

Cody exhaled a slow, shaky breath and brushed his shoulder length brown hair back from his eyes before reaching out to curl his fingers around Lucky’s arm.

“Why do you think he waited until he knew you were out of town? He didn’t want you to be the one to find him. You read his note the same as I did, he didn’t want to feel as if he was letting you down.”

“Isn’t that exactly what the fuck he did!”

“Yeah, it is, but he didn’t want to think about that. He didn’t want to consider that you might still need him. He didn’t want your love in that moment, Lucky, he wanted to be selfish. He wanted all of his pain to end. He wasn’t thinking about the pain he was gonna cause anyone else.”

Lucky snarled an oath and Cody scooted closer, trying to maneuver him into a hug, but Lucky resisted.

“Fuck man, I miss him too, I spent as much time at your place when we were growing up as I did at my own. He was like an uncle to me. I would have been right there on the edge of that cliff with you, trying to talk him down, but he didn’t give either of us that chance. He didn’t give my old man that chance and he was one of Ray’s oldest friends. He’s gone, Lucky. There’s nothing either of us can do about it now. Tonight let’s just ride out to the point, have a bonfire, eat some good food and remember what he meant to all of us.”

“I’m not going,” Lucky said as he yanked his arm from Cody’s grasp. “I’m gonna stay here until I get tired, then I’ll go home, maybe grab a frozen pizza on the way.”

“You can’t survive on orange juice and pizza.”

“I’m pretty sure it covers all the food groups,” Lucky muttered as he returned his gaze to the ocean. The waves seemed to be calming, which was a shame. He liked them high and angry, the crash of them against the rocks had been like an echo of his own mood.

Swearing, Cody grabbed Lucky’s arm and gave him a shake. “God dammit, Lucky, don’t make us bury you too.”

“You guys can cremate me if you want, scatter my ashes in the ocean and forget you ever knew me,” Lucky muttered.

Eyes narrowing, Cody released Lucky’s arm and punched him in the mouth. Lucky recoiled, more shocked than hurt as he watched Cody climb to his feet. A thin trickle of blood flowed from Lucky’s split lip, but he didn’t even bother reaching up to wipe it away. 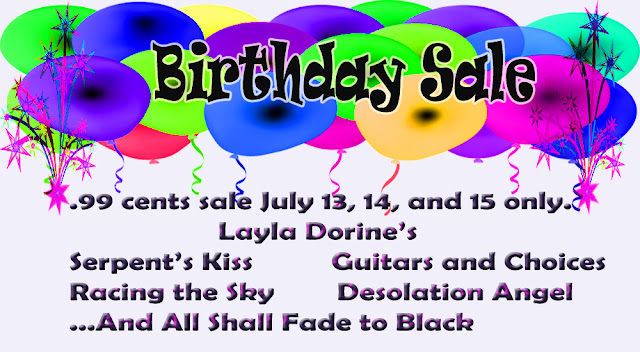 Hi and thank you so much for hosting me today to talk about Burning Luck. During the writing one of the things that really helped get into Lucky’s headspace was retracing old memories and old places. The water, the beach, those early mornings sitting by the shore, watching the sunset, learning to surf, chasing that perfect wave, these are all things that I was able to give Thorn and Cain, and that they were able to share with Lucky.

For Lucky, his love of the water mirrors my own love of the beach, swimming, floating, being out there after dark and just using it as a place to think. Living in the Midwest now is hard, because I don’t have the opportunity to do that unless I’m traveling. I have to say, anytime I’m near a coast, my first instinct is to find the beach and spend at least one day there, picking up shells, writing. I grew up near the ocean around Key West, Guam, and the New Bedford, it will always be a part of me though it isn’t something that appears in my stories often. Burning Luck gave me the opportunity to change that.

Some days it was like taking a trip down memory lane, pulling out those old photos, thinking about what Lucky would think, feel, do while he was alone by the water. In one scene he’s clearly brooding, and in another he’s inspired and thinking about ideas of what to paint on the next board. That’s how it always was for me. I went to the ocean for everything, the same as I go to the woods now.
I hope, as readers get into Lucky’s world, that they will see how much the ocean ties into the story and how the love so many have of it manifests in so many different ways. 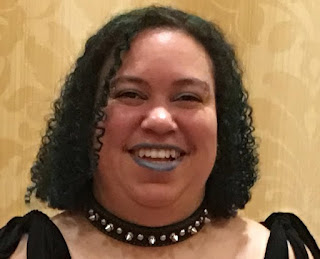 LAYLA DORINE lives among the sprawling prairies of Midwestern America, in a house with more cats than people. She loves hiking, fishing, swimming, martial arts, camping out, photography, cooking, and dabbling with several artistic mediums. In addition, she loves to travel and visit museums, historic, and haunted places.


Layla Dorine can be found at: