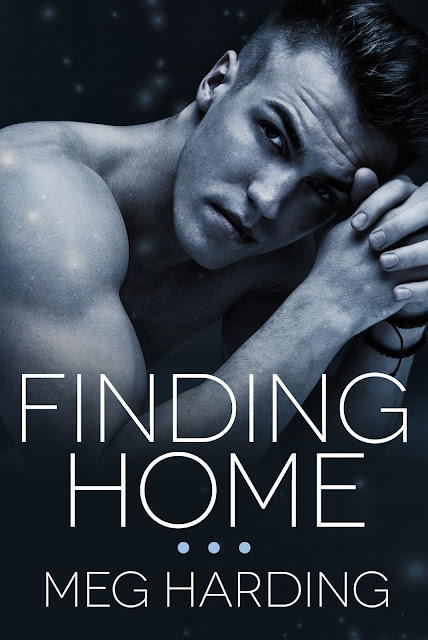 Jaden Matthews has never known his father or his father's family, but he's about to get a crash course on having siblings. With the recent passing of his grandmother, he's discovered he has three half-brothers and part ownership of a gym. In Serenity, Florida. His life in New York has hit a rocky road, so maybe this is the vacation he needs to get things back on track.

Chase Michaels lost his future in a car crash almost ten years ago, and he's made a new one for himself in Serenity. One that doesn't include getting emotionally involved with people who are just passing through. But Jaden makes his common sense flee and his gut react. He's got one month with the man who made him believe in taking a chance.

Finding Home is a new contemporary m/m romance. It's also the first I've read from this author and it definitely won't be the last.

This is the kind of book that wraps you up in the story and just makes you kinda happy. It's a very low angst, no drama, no conflict or confrontation, feel-good romance. The perfect book really for the summer pool-side or sandy beach read.

Jaden, has had his life completely upended. His husband's divorcing him, he's back living with his mother, and he suddenly lost his job. Now you might think that's perfect fodder for an angsty "My Life Sucks" kind of read but it's really not because Jaden is kind of rolling with the flow. With the unexpected news that his paternal grandmother has passed away and left him an inheritance, along with three half brothers, he hops in his car and heads down to Florida. So.. he has a little bit of stress going on in his life..but it's not over the top angst or drama. It's the crap that life likes to toss at you to make you build character (as my grandfather would have said) and Jaden is riding along with it to see what happens.

He doesn't expect to be rescued on the side of the road by hunky Smoothie Shop owner, Chase Michaels. He also doesn't expect to be attracted to him, either. Chase is in the little town of Serenity  after having his life changed drastically in college. He's created a new life, built a business, crafted strong friendships, and never really expected to find his happy ever after. He wasn't really looking for it, so when the adorable stranger from out of town runs out of gas and Chase offers him a ride into town the sparks are struck.

I loved the relationship that built between Jaden and Chase. One the one hand you have Jaden, who's discovering himself and who he wants in his life. Then you have Chase, who's just this really sweet guy who doesn't expect happy for himself, not beyond the current status quo. As they grow closer together, as Jaden opens himself up to the possibilities of not following what others want him to do, and as Chase reaches for the happiness with Jaden...you literally just fall in love with these characters. You can't forget Jaden's three half brothers, either. They are an integral part of this book, and both Chase and Jaden's lives.

This is a feel good story, with a sweet, yet sexy relationship build between Jaden and Chase. Then you also have the growing relationship between Jaden and his brothers. Which gives this story the Family We Create for ourselves feeling. Which many in the LGBTQ community have experienced through their lives. I kind of hope the author has plans for books for the brothers, because I absolutely adored them to pieces.

Overall, Finding Home was one of my top 10 summer reads so far. It had the fantastic characters that I love, a good well-paced storyline, strong secondary characters, and the characters exhibit growth throughout the story. I highly recommend this story for your summer/fall reading list and to grab later on for a re-read at least once or twice more.

Meg Harding is a graduate of UCF, and recently completed a masters program for Publishing in the UK. For as long as she can remember, writing has always been her passion, but she had an inability to ever actually finish anything. She’s immensely happy that her inability has fled and looks forward to where her mind will take her next. She’s a sucker for happy endings, the beach, and superheroes. In her dream life she owns a wildlife conservation and is surrounded by puppies. She’s a film buff, voracious reader, and a massive geek.