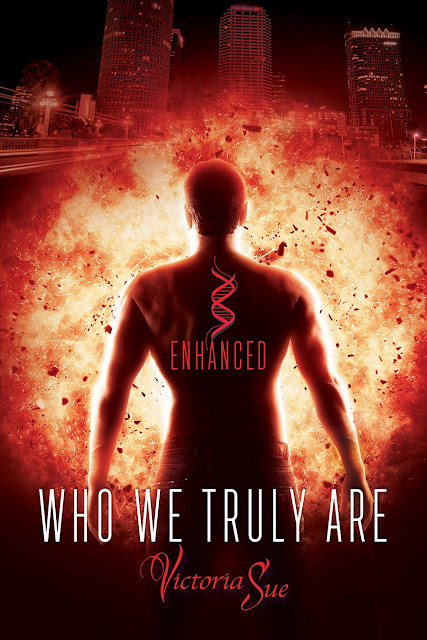 Blurb
Talon’s deadly abilities are spiraling out of control. Desperate to keep Finn safe, Talon struggles to protect the man he loves with all his heart, and not become the greatest risk to Finn’s life.

Finn has no choice but to offer himself as bait for the evil forces kidnapping enhanced children, facing danger he is untrained and unprepared for, and he is having to do it alone.

Does Talon have one last fight in him? Will he slay everyone who wants to destroy Finn and the team, or will he finally discover that to defeat their enemy and the ultimate threat, the biggest battle he has to face is one with himself?

Excerpt
Finn stood. He might as well go back early and see what he could find out. Hopefully get a chance to talk to Liam. He followed Sawyer to the car. “Vance told me you met the team at a gun range,” Finn said cautiously, hoping he wouldn’t be shot down, literally.

“Yeah,” Sawyer replied, getting in. “I’d gotten a job there working in the cafeteria, and the owner used to let us shoot sometimes. I happened to be in there when some idiot forgot he was carrying a loaded gun and turned around as Talon walked in.”

Sawyer smiled. “Talon got me fired.”

Sawyer arched a brow as they turned the corner. “That’s not a bad interrogation technique you got going on there.”

Sawyer smiled. “Anyway, the gun I wrecked cost over four hundred dollars. The owner saw what happened. I got fired, and he withheld my wages. Talon said it didn’t matter, as I was being offered a job with the FBI, and I was too stunned to protest.”

“Not just, although, in the space of seconds, I’d gone from working in a cafeteria to joining the FBI. So, yeah, that was kinda cool. I mean, with what happened to the gun.”

Finn blinked. “That was the first time?” he asked incredulously. “You weren’t able to do that when you transformed?”

Sawyer shook his head. “No. The only thing I could ever do was act like a stupidass magnet for metal stuff.”

Finn waited again as Sawyer stopped at some lights. He had no intention of interrupting Sawyer sharing for the first time since they had met.

“It was entertaining, I suppose. I could reach out and pick a fork up without actually touching it.”

“Nah.” Sawyer shook his head. “What was the use? I couldn’t ever do big stuff. It seemed pointless, to be honest, and a ton more grief than it was worth.”

“Do they know how it works?” Finn asked, curious.

Sawyer took a slow breath. “I let the doc do some tests. Did you know everyone has a magnetic field?”

Finn nodded eagerly. “I was reading about MEG techniques for measuring the brain’s electrical current.”

“Of course you were,” Sawyer said dryly.

“And how the electrical current in the brain is off the charts compared to the heart, but the magnetic rate of the heart is much stronger because the heart is much more synchronized and all the cells fire together,” Finn continued, ignoring the sarcasm.

“Did you know the human body’s magnetic field is low?” Sawyer asked. “But long story short, mine isn’t. The docs were wanting to do a load of tests, but I withdrew, and I’ve done my own research. I think I can control my body’s electromagnetic field—”

Sawyer glanced at him in shock. “I wasn’t expecting… I mean, that’s a huge leap.”

“I know,” Finn hurried to explain. “My dad, on top of everything else, had one or two epileptic fits not long before he died. He was having tests, and I read up on electrical stimuli and measurement for the brain. That’s where I know all the stuff from.”

Sawyer nodded. “I can see how you would.” The sarcasm had left his voice.

“But you don’t know for sure? You don’t want to find out?”

“How?” Sawyer said, exasperation apparent in the question. “I mean, can you imagine if they find out?” He sounded appalled.

“Plus, that only explains how you become invisible, not how you walk through objects.” Hundreds of questions and possibilities were running through Finn’s mind, and he wished he was on a computer. Then he cursed. It would take him hours to read what anyone else could go through in minutes. He could try, though.


Who We Truly Are is the second book in the Enhanced series by Victoria Sue. This is a true series in that this book follows directly behind Five Minutes Longer both in reading order and in timeline.

So I completely and utterly loved the first book in this series and this book was no different. For those of you that are fans of the THIRDS series, this series will be right up your book alley. No it's not about shifters but the camaraderie of the team along with Finn's slightly awkward but totally endearing personality really draw you in to the story.

This book picks up about 8 weeks after the ending of Five Minutes Longer. Finn is still trying to find his place in the team. Even though he's dating Talon, he still doesn't feels like he's not fitting in. Partly that's because he's barely been an agent and their team has been tossed out on the front lines. So he's had a few, okay a lot of mishaps, and the rest of the team continue to give him grief about it. It's mostly friendly grief but still, for Finn it's a little rough going. This is part of what makes him a very endearing character, too. Conversely it causes Talon's overprotective nature to want to not allow Finn to learn and push his boundaries. That sometimes makes you want to smack Talon in the back of the head... repeatedly.

There is quite a lot of conflict and action in this story that pushes the team to their limits. There are also outside forces attempting to tear the team apart. So this is not a typical second book in a series with an info dump as the main part of the story. It's further creating individual stand out moments for both Talon and Finn, and the rest of their Team. It also introduces a few new characters that i see impacting their future....in a good way of course.

I'm highly recommending this book, and this series especially if you love paranormal romance. Particularly if you like a series that focuses on both individual characters and a cohesive group of characters. The team aspect, really is more of long term family tie/unit that really makes you want to see more of the individuals along with the interaction of the group. This is one you really, truly need to pick up and read.

I look forward to the next book in the series.

Wrote her first book on a dare from her hubby two years ago and he says he has regretted it every day since. Loves writing about gorgeous boys loving each other the best, and especially with either a paranormal or a historical twist. Had a try at writing contemporary but failed spectacularly when it grew four legs and a tail.
Is an English northern lass but is currently serving twenty to life in Florida – unfortunately, she spends more time chained at her computer than on a beach.

Author Links
www.victoriasue.com
@vickysuewrites
https://www.facebook.com/victoriasueauthor/ – sign up for my newsletter and download a free story The Wrong Alpha
Posted by Wicked Faerie's Tales and Reviews at 7/14/2017 10:00:00 AM