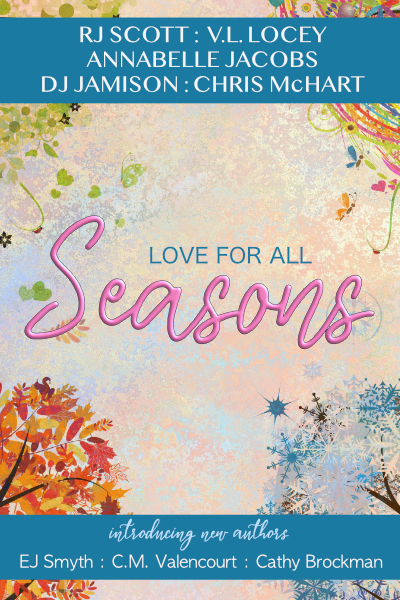 True love always deserves a happy ending, whatever the season. A charity anthology with all proceeds split between The Matthew Shepard Foundation and The Albert Kennedy Trust.

With characters who find love in a New York park, or on a college campus, in the middle of a snow storm or in the heat of summer, ‘Love for all Seasons’ delivers romance for everyone.

Including stories from five established authors and supporting the work of three authors, new to the world of writing MM romance.

After spending weeks admiring handsome but older Manhattan executive Brian Gilles while delivering brioche to him in Bryant Park, the man of his lusty dreams has just expressed a desire to get to know Isamu better. A night on the town is just the beginning of a whirlwind romance that will span not only four seasons but countless years.

Amid the beauty and charm of Bryant Park, New York City, two men are about to discover that love knows no age or economic boundaries. This is the first of four short stories in what will be the ‘Tales of Bryant’ collection starring these two amazing men, their one sublime love, and the Park where it all started.


Wyatt is a beekeeper, excited for the beginning of his town’s annual farmers market, where he expects to sell his wares and get some hot guys’ phone numbers. But these plans start to unravel when sets up shop next to a sexy vegan baker named Grayson.

Grayson believes that keeping bees is akin to owning a slaughterhouse, and he’ll do anything to run Wyatt out of business. Can Wyatt win him over with his sweet honey and even sweeter smile?


Sam's insomnia drives him out of his apartment in the wee hours of the night. He ends up at a diner, where he meets an intriguing waiter named Hunter. As the seasons go by, Sam and Hunter court over BLTs and OJ, slowly falling in love.


The ice storm of a century hits Missouri.

Winter savvy Lane Jennings is the only one prepared, thanks to a decade in North Dakota. Too shy to approach his drool-worthy neighbor, he’s left fantasizing about him at night. That is until the storm, when a branch breaks free, trapping him beneath. Now it’s up to Lane to save him from his icy peril and care for him throughout the storm.

It was a near death experience for stunned Jeffrey Nichols. Never had he seen anything as beautifully terrifying as the weather and his neighbor. One threatened his life and the other his secret. He wasn’t sure which was more dangerous, but when Lane gives him a warm shelter through the storm, he quickly realizes he will find out.


Sea, sand, and hopefully sun, are all Russ expects to find on his week away in Cornwall.

Surfing with his two best mates is all Blake has planned for his short break. With the long drive to get to Penzance, there’s no time for anything else.

With help from Bailey the dog, Russ and Blake discover they might have more in common than they first thought.

Who Do You Love, My Valentine - EJ Smyth

Immortal Nox is subcontracted to love god Eros during the Valentine rush. After he gets distracted by his long-time human crush Matt, his arrows go astray. The second missile finds a pretty young woman who instantly falls in love with Matt. Which would be great, except that Matt is gay. Nox must prevent the unsuitable match before the Gods find out. Yet doing his job may very well break his heart…

Read this steamy, romantic short story by EJ Smyth to get you into the mood for the perfect Valentine’s night.


Gabe runs a flower shop. He always makes bouquets for everyone, but nobody has ever brought him flowers. His love-life is non-existent. Until Jason walks in and sparks fly.

Jason in the middle of a nasty divorce and the last thing he needs is getting into another relationship. But he can't resist the shop-owner.

But even if Jason comes back for flower every week, one of them has to make the first step. And even if one does, can favorite flowers lead to anything?


It’s the last year of college and Luke can’t forget the captain of the hockey team, or the kiss they shared as freshman.

Justin has to decide if hockey outweighs his attraction to Luke, because this might be the last chance he’ll have of making things right. 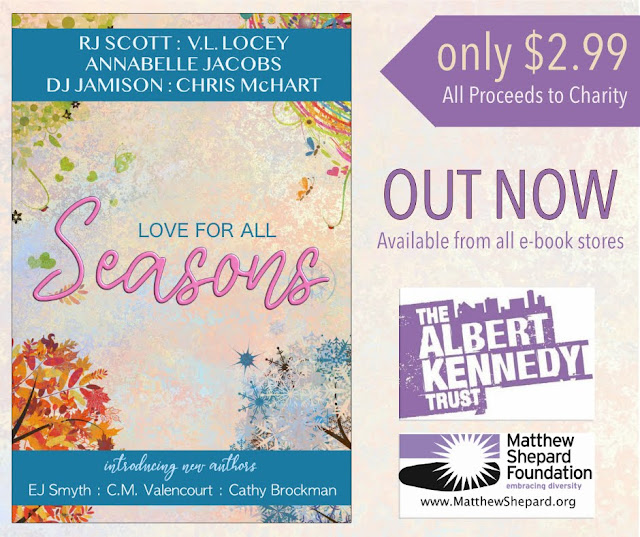 C.M. Valencourt is a new m/m and queer romance author. Their first book From the Ashes, an ex-friends-to-lovers road trip novel featuring slam poetry, pink hair dye, and a chase scene through a theme park, will be released in the first half of 2018. They like figure skating, ghost hunting shows, and Carly Rae Jepsen. You can get updates about From the Ashes and more of their forthcoming work by following @cmvalencourt on Twitter.

DJ Jamison is the author of more than a dozen m/m romances, including the Ashe Sentinel series and the Hearts and Health series. She writes a variety of queer characters, from gay to bisexual to asexual, with a focus on telling love stories that are more about common ground than lust at first sight.

DJ grew up in the Midwest in a working-class family, and those influences can be found in her writing through characters coping with real-life problems: money troubles, workplace drama, family conflicts and, of course, falling in love.

DJ spent more than a decade in the newspaper industry before chasing her first dream to write fiction. She spent a lifetime reading before that, and continues to avidly devour her fellow authors' books each night. She lives in Kansas with her husband, two sons, two fish and, regrettably, one snake.

Cathy loves her grandkids, cats, cooking and working to make her patio an outdoor haven.

When she's not writing stories with sexy cowboys, strong women, and the small towns they live in she's probably working on expanding her doll collection, crafting, reading, or listening to audio books.

If you like recipes, stories about food or flops, writing, teasers and more you can find that on my Website/Blog Cathy Writes Romance.

Thanks for reading and watch for more Lane and Jeffrey.

Hi there! My name is EJ Smyth, I live in Frankfurt, Germany and I’m passionate about romance with other elements mixed in. Paranormal romance, romantic thrillers, gay romance, if it’s got two difficult characters finding each other, I’m on board!

I’m currently working on a series of short stories Keith is Awesome about a young man exploring his sexuality. Not something I’ve ever written before but the research alone was quite a bit of fun. I love to talk to my readers, online and offline, so please feel free to drop me a line!


I’ve always had stories in my head, but a while ago I allowed them to get out and on paper. Looks like it has been a good decision, although the more stories I write, the more I have in my head. Maybe I’ll have all of them out someday, and there’ll be nothing more to write, but for the next years, I don’t see that coming.

When I’m not writing, I spend time with my family (I have the best husband EVER) and try to keep all my animals happy. I also enjoy gardening and cooking, although I’m still looking for someone to clean up afterwards. And, of course, I love reading, whenever I have a quiet moment.

Writing and reading is my break from everyday stress and I hope you join me!

RJ Scott's goal is to write stories with a heart of romance, a troubled road to reach happiness, and most importantly, that hint of a happily ever after.