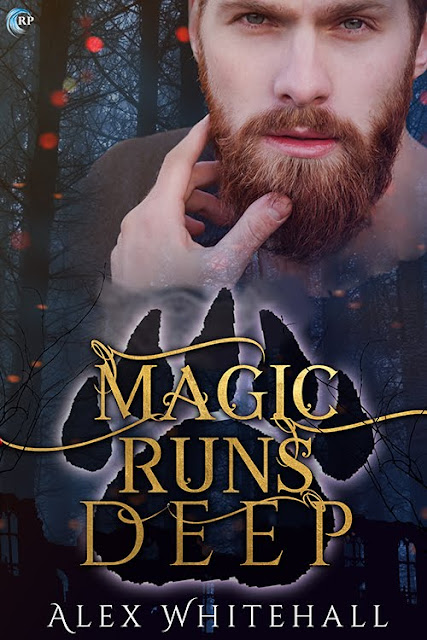 Hello, everybody! I’m Alex Whitehall, and I’m here today touring for my fantasy novel Magic Runs Deep, which is about one man’s search to find himself—and true freedom—after a long imprisonment, and the path to trust that he follows along the way.

For the last five years, Veier has been chained to a king’s throne in his bear form. When a neighboring kingdom overthrows the crown, Veier’s imprisonment ends, but true freedom is not so easily earned. With blood on his hands, he needs someone with patience, strength, and trust to help him become the person he was before and prove to the invaders that he isn’t the monstrous king’s loyal pet.

Elrid, the invading king's brother and a powerful mage, is everything Veier despises. He’s also the only thing between Veier and execution, because he thinks he can help Veier change from an aggressive bear shifter into a reasonable man. While the pair have a rough start, with long talks and mutual leaps of faith, they begin to care for each other.

However, the closer Veier gets to his freedom, the closer he is to losing Elrid. He must find balance in his heart and his life if he wishes to truly claim the freedom he’s been given—and the man he loves.

If there are two types of people in the world, Alex Whitehall probably isn't one of them, despite being a person. Their favorite pastimes include reading, horseback riding, sleeping, watching geek-tastic television, knitting, eating, and running. And wasting time on the internet. And spending glorious evenings laughing with friends.

While Alex prefers sleeping over doing anything else (except maybe eating), sometimes they emerge from the cave to be social and to hunt for food at the local market. They can be found blogging, reading, and tending after their aloe plants.

To celebrate the release of Magic Runs Deep, Alex is giving away an ecopy of Second Skin! Leave a comment with your contact info to enter the contest. Entries close at midnight, Eastern time, on April 14, 2018. Contest is NOT restricted to U.S. entries. Thanks for following along, and don’t forget to leave your contact info!