You're My Everything by Lily G. Blunt - Release Blitz with Excerpt and Giveaway 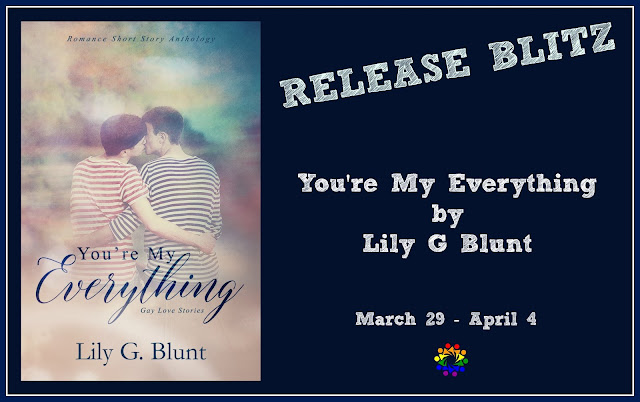 Title: You're My Everything

Some sweet, some steamy, and one or two will bring a tear to the eye.

Service with a Smile

The stories in this anthology have been published before.

They have undergone several rounds of edits and the updated versions are published here.

As Nathan waits for Jasper in a restaurant to celebrate their tenth anniversary, he recollects their past and some of the passionate moments he has experienced with the love of his life.

Dorian has been cast as Dorothy in his school's production of The Wizard of Oz.

Like his character, Dorian is about to discover whether dreams really do come true.

Chris and Andreas are opposites in character. Both fear the other wants to move on.

Can being stranded on a mountainside resolve the doubt that is threatening to tear them apart?

Despite being besotted for years with Jack, Corey finds himself falling in love with Pierre, a foreign exchange student, who is staying at his home over the summer vacation. Up to this point, Jack has shown no sign that he was gay or that he wanted Corey as anything other than a friend. It is only when he sees Corey and Pierre together that Jack wishes he had acted sooner.

Service with a Smile

Terry visits a men’s designer boutique, and Ash gives him service with a smile…

Jasper is struggling to move on with his life without Nathan by his side. If only he could touch his lover one more time...

Excerpt from Over The Rainbow

THE BELL sounded to signal the end of the school day.
At last.
Dorian let out a huge sigh of relief. He quickly dismissed his boisterous pupils and logged himself off the computer on his desk by the time they’d all noisily exited the classroom.
God! What a day!
Anyone who thought this job was easy should try teaching Pride and Prejudice to a class of fifteen-year-old boys. And damn it, he still had the bloody staff meeting to attend before he got to go home.
Dorian scooped up his teaching notes and a pile of books he hadn’t managed to mark at lunchtime and strode out of the classroom barely missing two boys who ran past him. “Walk in the corridor!” he instructed the rapidly fleeing flash of emerald green uniforms, but to little effect.
Dorian sighed again and looked down at the books in his arms.
Yet another fun-filled night with hardly any time to relax.
He wished he’d believed the person who’d told him his social life would be almost non-existent during his first year of teaching. Marking, planning, staff meetings, talking to parents, in addition to after-school activities two or three times a week. Bring back college days any time. At least he’d had something he could laughingly call a sex life then.
Thank God it was the half-term break next week. Time to draw breath for a few days at least.
Dorian slowed his pace as he passed the adjacent classroom and glanced hopefully inside. His search was rewarded. Catching sight of the object of his desire made his stomach flutter.
“Hey, Dorian. Have you got a minute before the staff meeting starts?”
Dorian flushed a little and smiled. “Sure.” He glanced appreciatively over his mentor, Mr Leonard. “I wanted to ask you a few questions about my lesson observation tomorrow if you’ve got time.”
Mr Leonard, Head of the English department, was everything Dorian wished he could be—and not just because of the expert control he had over the pupils. He was tall, broad-shouldered, and most of his exposed skin was covered in thick, dark hair that Dorian spent most nights dreaming about; he often imagined what the hairs would feel like if he ran his hands over Mr Leonard’s skin and what this hunk of a man would look like naked.
“That’s fine, D. Let’s grab a cuppa and talk on the way.”
Dorian nodded and shifted the books in his arms so most of his suddenly bulging groin was now covered. The very thought of calling Mr Leonard ‘Sir’ was enough to harden his traitorous dick at the most inopportune moments. He usually thought of Mr Darcy and Elizabeth Bennett at times like these, but those thoughts often turned to Mr Bingley and a wet-shirted Mr Darcy, and he was no better off.
Dorian did his best to concentrate on their conversation, focusing on Mr Leonard’s eyes and lips as they discussed his lesson for class 5B the following day. “And I want you to speak up in the staff meeting today….”
“Yes, Mr Leonard.”
“Look, Dorian, it’s about time you called me Mark. We’ve been working together for over six weeks now.”
Dorian smiled again, his cock pulsing when his name fell from the older man’s lips. He’d never liked the name his parents had given him and had to suffer being called everything from Dory to Ryan in his teen years, but hearing Mark say it sent a shiver down his spine every time. “Sure. If that’s okay with you, Mark.”
Mr Leonard—Mark—paused as they approached the staffroom and huffed. “Of course, it is but not in front of the little Munchkins, though.” Dorian chuckled at Mark’s nickname for the pupils.

Lily G. Blunt enjoys writing contemporary gay romance and paranormal stories. She loves to explore the relationship between two or more men and the intensity of their physical and emotional attraction. Angst often features in her stories as she feels this demonstrates the depth of feeling for each other. Lily is forever writing imaginary scenes and plots in her head, but only a few ever make it to the page.

She reviews for several blog sites and has recently launched Gay Book Promotions, an online book promotion service for authors of LGBT+ romance and fiction. Lily loves to hear from readers and other authors.

Enter the Rafflecopter Giveaway for a chance to win a signed copy of You're My Everything and a choice of ebook from Lily G Blunt's backlist.