It is the third story in the series but stands alone.

One is accused. One is betrayed. One is a killer.

Midwife-apprentice, Kyle’s sheltered world is shattered when a patient’s alpha mate flies into a murderous rage and attacks him. Kyle is rescued by a handsome alpha visitor, but as attraction blazes between the two men, and they fall into each other’s dreams, what starts as lust becomes something impossible. Kyle is a beta. He can’t be an alpha’s true mate. And yet, what else explains their connection?

Visiting Pine Creek Lake alpha, Shadow isn’t looking for his true mate when he stumbles across a beta being attacked in the middle of the night. But when a simple rescue reveals a chain of possible murders, Shadow must learn the truth about the man in his dreams before it’s too late. Something is driving alphas in the Blackcreek pack to rage and die young. Is Kyle as ignorant as he pretends, or is he hiding a dangerous secret?

As Kyle and Shadow work together to discover the truth, both men are forced to question their deepest assumptions about themselves and each other. Are they fated mates? Is Kyle living a lie? And when the killer is revealed, will Kyle have the courage to face the truth before Shadow suffers the same death as the others?

Find out in Omega Shadow, Book 3 of the Pine Creek Lake Den series, an action-packed Mpreg romance mystery with a happily ever after to melt your heart. 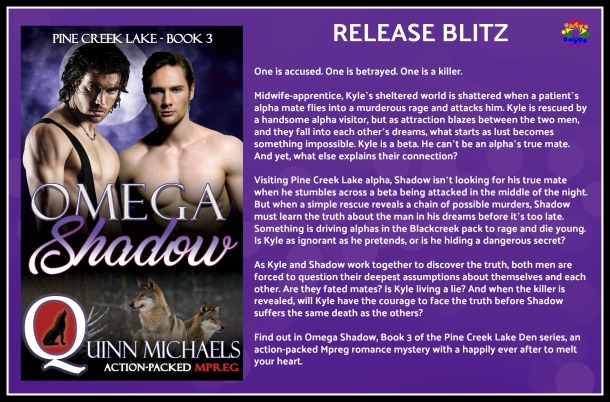 Kyle and Ron hugged, and awkward sideways embrace taking into account Ron’s pregnant belly. Though Kyle was a beta, he was only a couple of inches taller than Ron, and no matter how hard Kyle worked out he never really managed to bulk up. It was frustrating, just one more way that Kyle didn't quite fit in.

As always when Kyle made house calls, with or without Artie, he carried a leather satchel with the basic emergency supplies: clean bandages, sterilizing wipes, blood sugar equipment, clamps, suture, and medicines.

Kyle slung the bag back over his shoulder and with a final goodbye to his pregnant patient, headed down the hallway and outside. It was a cold night, and clear, the sky above a velvet tapestry with pinprick stars broken only by the sliver of the crescent moon. At almost midnight, the chill spring air put a layer of frost on the ground. It crunched beneath Kyle's boots as he walked towards the main path that ran through the center of the Blackcreek settlement.

Kyle whirled towards the voice, clutching the handle of his bag. Chaz stepped off of the main path and stalked towards Kyle, weaving a little like he was drunk. But as he got closer, Kyle didn't smell booze on him.

"Are you okay, Chaz?" Kyle asked. Chaz a little over thirty-years-old with thinning hair and a paunch. He was big, even for an alpha, and though he tended towards fat, it was draped over a thick slab of muscle.

Chaz shouted, "What were you doing with my mate? Fucking him?"

“I was checking on the twins. Your babies.”

Kyle took a step back. Chaz was between him and the main path, but Kyle could run for the space between the two houses at his right. Still, it would be better to talk his way out. The last thing he wanted was to send this furious alpha to Ron like this. "Ron’s having those pains again. He spoke with Artie. It's Kyle, remember, Artie’s grandson?" Even if Chaz didn't smell like booze, he had taken something. His hands were shaking, and in the faint moonlight, a faint sheen of sweat glimmered on his forehead.

Ron needed ideas, and a shotgun to enforce them if Kyle had anything to say about it, but an argument wouldn't do either of them any good right now. Kyle was grateful to be a beta. Omegas had it a lot harder. Artie reminded him of this almost every day. Kyle held his hands open in front of him. Luckily he was small. Nonthreatening. "The twins are looking very good. And Ron is doing well. He was worried they might be coming early, but when I palpated – –."

"You had your hands on him." Chaz bared his teeth.

Something was wrong. Chaz was usually a dick, but his irrational anger at Kyle for performing a basic examination was over-the-top. He closed the distance between them while Kyle was trying to explain, and like a striking snake, Chaz grabbed at Kyle's throat.

Chaz’s beefy hand was shifting, the tips of his fingers tapering into claws. He swayed on his feet." The twins. My twins." His forearms sprouted fur in odd patches. "The twins are mine. Ron is mine. Mine!"

"Of course, they're yours. Maybe we should sit down on the steps for a while. Did one of the other alphas… Give you something?"

"If you're not fucking him, then you need to fuck off."

Kyle wanted to run, but with how Chaz was acting, he didn't trust the alpha alone with his mate. "How about I come in with you?” Kyle suggested. “I can make up a tea. It'll cool you off." With the amount of sweating that Chaz was doing, he had to be hot. Maybe he had gotten in to some of the human opioids in town. Usually they didn't affect shifters like this though. Leave it to Chaz to be the exception.

Chaz scratched his cheek, and the tip of his claw dug in, drawing blood. "Ow!" He let out a string of curses.

"It’s your hand. I think there might be something going on with your shifting," Kyle said as calmly as he could. Like he was talking to a child. He got along well with children and babies. Unfortunately, the tone of voice didn't work as well on tripping werewolves. Chaz, with another burst of inhuman speed, grabbed Kyle by the shoulders and squeezed. "What did you do?"

"I didn't do anything." Kyle's voice shook with something between fear and rage. How did Ron stand this? Chaz and Ron had been arranged to mate eight months ago, well before Jeff had died and Devon, his son, had left to avenge him and returned not with the eyeteeth of his enemy but with a mate from the other pack.

Now Devon wanted to change how things were done in Blackcreek, and seeing Chaz now, Kyle's support for this new way of doing things only grew.

Chaz towered over Kyle. His jaw elongated, and when he growled, it was a wolf growl.

Kyle planted his feet and with bent knees shoved the midwife bag into Chaz stomach with all of his strength. It wasn't enough. Chaz growled again, and his clawed hands pierced the thick leather of Kyle's jacket to push through his shirt and into his skin.

“Hey!” Someone shouted from behind him.

Kyle didn’t recognize the voice, but the distraction was enough to loosen Chaz’s grip.

“Get help,” Kyle shouted. Chaz’s face and body was shifting back and forth between human and wolf. Kyle had never seen anything like this. “Get Dr. Havisham!”

“Put him down,” the stranger said. His voice was closer, though Kyle hadn’t heard him move.

“Pine Creek Lake,” Chaz said, and spat. The glob of spittle barely missed Kyle’s cheek as it passed over his shoulder.

Pine Creek Lake? It must have been one of the visitors. Kyle had only seen them from afar, having been pushed to the back of the crowd when Devon had returned with his mate. The visitors were focused on alpha and omega relations. Kyle, as a beta, hadn’t had much reason to concern himself with them, and though he’d been curious, he’d been too busy with his own duties to go out of his way to talk to them.

What was this werewolf Pine Creek Lake werewolf doing here in the middle of the night?

“Please, put me down,” Kyle said to Chaz.

“Fine,” Chaz said, and threw him, hard, at the wall of the neighboring cabin. The only saving grace was that whatever Chaz taken, it affected his balance. He stumbled, and Kyle landed short, skidding across the hard dirt.

Kyle lay on the ground trying to catch his breath. His arm hurt, but he could wiggle his fingers so it wasn't broken. The stranger, a tall, wide shouldered man with hair like ink tied at the base of his neck, dark clothes, and dusky skin, moved quickly and silently to place himself between Chaz and Kyle.

The stranger was unmistakably an alpha, though he was leaner than Chaz. Kyle knew he should get up and run to get help, but even as he regained his breath, he couldn't tear his eyes away from the stranger. The alpha. His scent, a mix of damp pine needles and sweat, filled Kyle's nose.

Bizarrely, Kyle felt aroused. Maybe Chaz hadn't taken something. Maybe there was some kind of pollen or poison in the air? Kyle's skin flushed. It was like one of the hot flashes that Artie had suffered with when Kyle was a child. Beta women and omegas got them to when they reached the end of their fertile years. Maybe Kyle was having an allergic reaction? Whatever was going on, it was getting worse. Sweat trickled slick between Kyle's ass cheeks, his cock hardened, and he had the strangest urge to rub himself against the new alpha and mark ownership.

Chaz lashed out again, his arm a blur as he swung, claws bared, at the stranger. Chaz shouted an incoherent mix of curses and growls. The stranger ducked, his movement so efficient it didn't seem so much like speed and more a casual lowering of his head, and then with another precise and powerful burst, he slammed his fist into Chaz's chest.

Kyle expected Chaz to try and get back up on his feet, but he was still. Kyle couldn't even see him breathing. The stranger knelt beside Chaz's body and after a few seconds, pressed his fingers to the pulse point on Chaz's neck.

Kyle got himself to his feet, and straightening out the strap on his bag, walked hesitantly towards his rescuer.

"Are you okay?" Kyle asked. His mouth felt dry, and a sudden urge to touch the alpha washed over him.

The stranger looked up. His eyes were a perfect shade of amber. As they met Kyle's gaze, the alphas pupils expanded and Kyle smelled desire. Then he blinked, and quickly turned his head back towards Chaz.

"Why?" Kyle squinted down at Chaz. He wasn't moving.

Pennsylvania native, Quinn Michaels is a fan of fantasy, werewolves and M/M mpreg romance! She strives to write action-packed adventures of romance, self-discovery and second chances, all served up with a hefty helping of sweet, sexy Omegas and hot, determined Alphas who will do anything to cherish, love, and protect their mates. She also enjoys the sexy times!