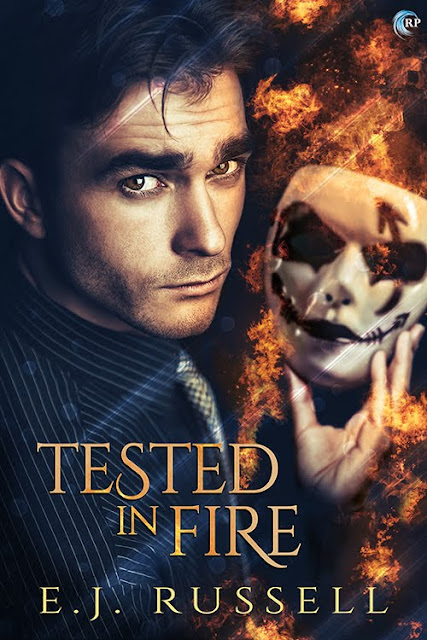 About Tested in Fire

Six months ago, Stefan Cobbe was at rock bottom: grief-stricken, guilt ridden, debt laden, artistically blocked, and living on charity in an isolated mountain cabin. But after reconciling with his first love, Luke, and moving to Sarasota with him, Stefan is preparing for his first major show. Yes, he still has debts, and no, Luke doesn’t understand Stefan’s desire for independence. But compared to last year? No contest.

Luke Morganstern ought to be happy. After all, his art-investigation business has recovered and he’s got his boyfriend back. But Stefan stubbornly refuses to move in with him or accept Luke’s financial help, and it’s really starting to bug him. Who knew that the biggest test of their relationship wouldn’t be time or distance, but his own insecurities? After Luke’s next job—a trip to Italy to retrieve a mysterious artifact—he plans to convince Stefan that it’s time to totally commit.

But when Luke returns, he changes, and Stefan begins to suspect that the person in Luke’s skin isn’t Luke at all. He can hardly go to the police and claim his lover is the victim of a supernatural hijacking though. He needs alternative help to find Luke and get him back, because he refuses to let anyone—or anything—come between them again.

About the Art Medium Series 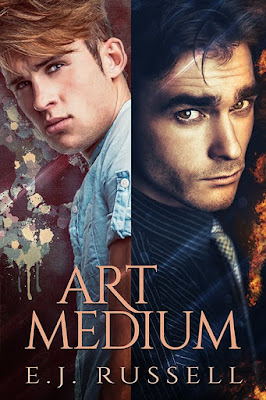 Artists use all manner of materials to express their vision, to interpret the world around them, to affect the hearts and minds of their audience.

But what if the artist himself were the medium? And what if artistic inspiration weren’t the only force at work?

If painter Stefan Cobbe and art investigator Luke Morganstern don’t answer those questions fast, they stand to lose their reputations, their relationship—and their lives.

I wrote the first draft of Tested in Fire back in 2013, soon after the first version of The Artist’s Touch (which was then called Northern Light) was contracted. However, my publisher at the time wasn’t interested in series with continuing characters—they wanted a different couple in each book, even if the book was set in the same ‘verse, so I set the book aside. For a really long time. Well, four years. That counts as long, right?
However, the book was still lurking on my hard drive, all the characters marking time until I got around to giving them the attention they were too polite (*ahem*) to demand. So when I was writing Stumptown Spirits and needed a medium to consult with Logan and Riley, I knew exactly who to call.
Marguerite Windflower, aka Peg Clapp, and her sidekick, Hootie.
Marguerite is a major secondary character in Tested in Fire, and although she doesn’t have a lot of page time in Stumptown, she capitalizes on what she gets. She makes the trip to Portland to slog around Forest Park with Logan. After Logan lets her name slip, Riley contacts her for advice:
He plonked down in the chair, cracked open his laptop, and dialed the number he’d found online for Marguerite Windflower, psychic counselor.
“Greetings, pilgrim.” The faint tinkle of wind chimes backed the woman’s plummy tones. “And all the blessings of the season of Samhain.”
“Uh . . . hello? Is this . . . Marguerite?”
“I . . . What is it, Hootie? Don’t mumble. Oh, thank Christ, a sane one.” Her voice dropped two octaves and took on a rasp worthy of Tom Waits. “I’ve had my fill of idiots and phonies for the day.”
“How do you know I’m not . . . um . . . either of those?”
She snorted a laugh. “Psychic, remember? I know all, see all, all that shit.”
“Really?”
“No. But I’ve got an associate with, shall we say, connections. He claims you don’t need the new-age bullshit. So hit me.”
“Wight.” Riley cleared his throat and shrugged his shoulders to dispel the tingle creeping up his spine. “Right. Well, a couple of years ago, you came to Portland with Logan Conner.”
“Yeah.” She stretched out the word, infusing it with a boatload of suspicion.
“You saw the ghost war in Forest Park.”
“And? Shit. Hold on a minute. Those wind chimes need to fucking die.” After the clatter of the phone being tossed on a hard surface and a brisk tattoo of footsteps, the wind chimes cut out. The footsteps returned. “That’s better. Christ, those things are annoying. So he decide he wants the procedure after all?”
“The procedure?”
“Because, I’m telling you, I’m not going back to that soggy excuse for a city for less than double the fee. Triple. Hootie hated the damn place, and don’t get him started on flying coach.”
She even gets a stealth mention in the Wolf’s Clothing epilogue:
Plus, Riley had put them in touch with this new-age shaman or witch or whatever—although she called herself a psychic counselor—and she’d come up with a much better potion than that Middle Ages crap.
So even though the main characters never intersect, based on this Easter Egg evidence, the Legend Tripping books and the Art Medium books exist in the same ‘verse!
Although, I suppose I should learn never to say never, eh?

To celebrate the release of both books in the Art Medium series, E.J. is giving away a $25 Amazon credit and an ebook copy of both titles in the Legend Tripping series! Leave a comment with your contact info to enter the contest. Contest closes at midnight, Eastern time, on April 7, 2017 and is NOT restricted to U.S. entries. Don’t forget to leave your contact info!