You don’t greet your new boss dressed like an underage rent boy. But when Jack Horwood—ace hacker and ex-MI6 operative—opens the door to Gareth Flynn, he's too busy to worry over details like that. And anyway, his potential new boss is his former Commanding Officer – the same guy Jack has had a crush on since he was seventeen. So he should understand, right? When he applied for the job in Nancarrow Mining's corporate security division, Jack had hoped for peaceful days repelling cyber attacks. Maybe a bit of corporate espionage on the side. His plans didn't include rescuing abused children, hunting pimps, or dealing with his overly protective and hot-as-hell boss, Gareth Flynn. Walking away is not an option. Jack never takes the easy way out. More than that, meeting Gareth raises old ghosts that Jack needs to put to rest. Rescuing kids. Taking risks. Saving the day. Jack can do all that – but deciding what to do about his attraction to Gareth isn’t the sort of cloak-and-dagger game Jack plays well. Yet Gareth, strong and smart and always on hand when needed, might be Jack’s salvation.

Jack hadn’t minded at all, when he woke, to find himself draped over his bed partner as if Gareth were an extra pillow. Neither did he see a reason to change his position. His nose was buried in Gareth’s neck, his arm clasped Gareth’s waist, and their legs tangled in ways Jack found pleasantly suggestive. He rested quietly, breathing as softly and evenly as he knew how, and enjoyed the moment.

There was a hint of roughness to Gareth’s jaw, and despite the previous night’s shower, Gareth’s skin held a trace of scent that Jack found irresistible. If asked to define it, he’d call it spicy, even though that didn’t quite do it justice. It was a dark, rich scent, more alluring than cinnamon and chili spiced chocolate, but somehow containing both these flavors, along with a bitter edge and something that reminded him of well-worn leather. Jack preferred clean citrus notes for everyday wear, but his stomach muscles clenched every time he caught a hint of that dark spice. He turned his head just slightly and nuzzled his way deeper into the silver hair, for once content to lie in bed and dream.

He was so lost in quiet bliss that he disregarded the warning signs: the soft slide of a foot along his calf, the tensing of the muscles in Gareth’s abdomen, and the hand that suddenly cupped the back of his head. So when he found himself flipped over and pinned to the bed with Gareth’s face above his own, he could do little more than gape.

“You sure have the patience of a saint,” Gareth huffed. “How long were you going to pretend that you were asleep?”
“I wasn’t pretending,” Jack protested. “Just enjoying myself.”

He stretched, testing Gareth’s hold. It was firm but not really restrictive. He could get away if he needed to. That realization soothed the small spike of panic in his chest and turned it into a well of heat. He let a teasing smile curl the corners of his mouth, and he stretched again, more deliberately this time, brushing skin against skin. “I couldn’t make a move, anyway,” he announced on the heels of Gareth’s soft gasp at the contact. “I promised I wouldn’t jump you.”

“See, I would never promise something as stupid as that,” Gareth rumbled before he leaned in to brush their lips together.

“Good for you,” Jack whispered back and concentrated on tracing Gareth’s lips with the tip of his tongue until Gareth pressed in more firmly.

Their kiss was like the entree to an exquisite meal: sweet, promising, and with just enough fire to whet the appetite. Jack soon wanted more. He buried one hand in Gareth’s hair and slid the other across Gareth’s broad back until he felt the muscles shift under warm skin as Gareth moved. Teeth clashed, and tongues tangled as both grew more serious, and Jack didn’t give a damn when a deep moan escaped his throat. Gareth deserved some credit. He’d managed to turn him on to an almost painful degree in no time flat. With barely more than a kiss.

Jack arched up to bring their bodies firmly together and felt Gareth’s arousal press into his hip. Glad for the assurance that this was a two-way street, he shifted and pushed up, rolling them over, thrilled to hear Gareth growl at the sudden separation of their mouths. His teeth grazed a trail along Gareth’s jaw and down his neck.

Gareth gasped and squirmed but didn’t try to get away from Jack’s ministrations. His hands found skin, slipped to Jack’s ass, and pulled him down. Hard. Heat flared through Jack, and he retaliated by nipping on Gareth’s collarbone before moving his attentions to the hollow of Gareth’s throat. Gareth’s fingers painted trails of fire on his skin, and every time he caught a whiff of that dark, spicy scent, something like an electric shock spiked through him.

He raised his head and went for Gareth’s lips again, adding teeth and fire and clear intent. The kiss turned messy, Gareth’s hand tangled in his hair, and Jack was on the verge of losing his train of thought when Tohoshinki’s “I Think U Know” interrupted their heated exchange.

Jack froze. Then he swore. Then he bent over the side of the bed to fish his phone from his trouser pocket, swearing some more when he came up empty on the first couple of tries. Finally he flipped the phone open and answered.

So, I went in not quite sure what to expect from this book. The blurb reads like a romantic suspense but I wasn't sure if I'd get more romance or more suspense. What I got was one hell of an awesome story. My family pretty much had to pry my kindle out of my hands while I was reading Job Hunt. I did not expect to be that sucked into this story.

The story kicks off with Jack, on the hunt for a new job. Having left his position with MI6 unexpectedly he's not sure where he would fit in best. Using his incredible hacking skills he whittles his list down to six prospective companies that are most vulnerable to 'attack' and it just so happens one, Nancarrow Mining has an open position. Going to the interview ends up with a surprise meeting with his old commanding officer from the military, who is now the head of their security team.

To say Jack is throw but Gareth's appearance is putting it mildly. He's been in lust with Gareth since their military days but never acted on it. Not only that, he wasn't sure if Gareth was even interested in him that way. Gareth definitely doesn't waste any time in letting Jack know he is VERY interested and has always been interested.

Job Hunt is most definitely a romantic suspense book. It has a very hot, and sexy romance between Jack and Gareth which hits all the right notes between them. It also has multiple suspense plots that showcases both Jack and Gareth's skills and strengths. There are also quite a handful of secondary characters introduced in the suspense plots that I hope to see in further books from this author in this setting. I understand that this is just the first book in the series with at least 2 others to come featuring Jack and Gareth and a few spin-offs where they will be included.

I can't recommend Job Hunt enough, for me it was a very well written, strong, character and plot driven story. The author really succeeded in sucking you into the story and also making you fall for the characters. I absolutely loved Jack and Gareth, but the author has two secondary characters, Nico and Daniel that stole my heart and did't give it back yet. If you like romantic suspense you really need to give this book a go, it delivers all the way around. 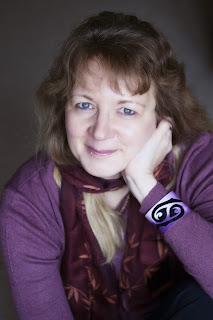 Jackie Keswick was born behind the Iron Curtain with itchy feet, a bent for rocks and a recurrent dream of stepping off a bus in the middle of nowhere to go home. She's worked in a hospital and as the only girl with 52 men on an oil rig, spent a winter in Moscow and a summer in Iceland and finally settled in the country of her dreams with her dream team: a husband, a cat, a tandem, a hammer and a laptop. Jackie loves stories about unexpected reunions and second chances, and men who don't follow the rules when those rules are stupid. She has a thing for green eyes and tight cyclist's butts and is a great believer in making up soundtracks for everything, including her characters and the cat. And she still hasn't found the place where the bus stops.